Wal-Mart Stores' (NYSE:WMT) management made a decision last year that at first glance seemed slightly out of character. Executives opted to slow expansion of the organization's physical store space, consequently cutting new development dramatically. In the first nine months of 2017, the global retail giant slashed spending on store and club development by nearly 60%, from $1.7 billion to $712 million.

A development budget of approximately $700 million, which includes store relocations and expansions, appears almost parsimonious given the company's trailing-12-month sales of nearly $500 billion. In fact, for the nine months ended Oct. 31, Wal-Mart widened its total global footprint by just 3 million square feet over the year-ago period, ending the period with 1.1 billion square feet.

Yet at the same time, Wal-Mart bumped up spending on store remodels during the first three quarters of 2017 by 24%, to $1.6 billion. Spending on e-commerce, including technology and supply chain initiatives, increased by 10% to nearly $2.9 billion.

Management calls this shift in spending priorities "strategic capital allocation." Wal-Mart executives believe they can produce improved sales and a higher return on assets (ROA) by increasing spending on e-commerce activities while enhancing existing physical stores to double as traditional retail locations and as distribution points for e-commerce sales.

An idea a few years in the making

So far, the capital allocation strategy, especially the reprioritizing of investment to e-commerce growth, appears to be paying off. Comparable-store sales increased 2.7% during the company's most recently reported quarter. Roughly 80 basis points, or 30% of this improvement, was attributed to rising e-commerce sales. Total revenue for the quarter jumped 4.2% versus the prior year -- an attractive growth rate for the sprawling consumer goods behemoth.

While the shift of resources has been dramatic in the current fiscal year, which ends Jan. 31, Wal-Mart has been priming its business for an increase in productivity over the last two years. It's done so by curbing growth in its largest segment, Wal-Mart U.S., which includes all non-Sam's Club U.S. operations.

Between 2012 and 2015, the Wal-Mart U.S. segment added square feet at a compounded annual growth rate, or CAGR, of 2.75%. However, management began tapping the brakes on this expansion in fiscal 2016, cutting the growth rate nearly in half to 1.4%, followed by 1.4% expansion in 2017. In the current fiscal year, with one quarter left to report, square footage has grown just a half-percent over the prior year.

The result? As revenue growth outpaces added retail space, Wal-Mart is reaping a significantly better sales yield out of each square foot in its U.S. segment. The trend begins with that 2016 inflection point: 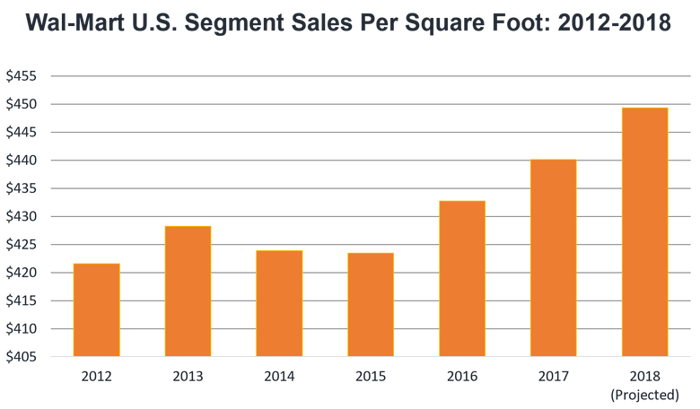 Of course, the higher revenue pushing this trend is not without cost. The company is giving up some profit as it invests in price to pull traffic into stores and also to win e-commerce market share from rival Amazon.com (NASDAQ: AMZN). Sales per square foot are rising, but in the short to intermediate term, the company is bent on reinforcing its core customer proposition of EDLP (everyday low prices).

Thus, operating margin has declined by 3.6% in the current fiscal year. Over the next couple of years, we may see Wal-Mart continue to tolerate lower profitability in its thirst for greater market share, a very Amazon-like trade-off. 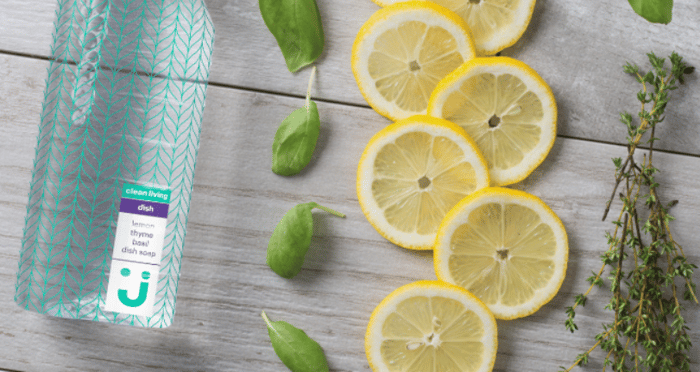 More recently, the acquisition of New York-based delivery start-up Parcel gives Wal-Mart the tools to sell in dense urban areas in which it's often impractical to open supercenter store formats.

In sum, Wal-Mart's entire current strategy can be seen as an attempt to boost its yield on physical assets. By tapping the brakes on square foot expansion over the past two years, and braking even harder in fiscal 2018, the company has transformed itself into a more productive and competitive enterprise. It's no wonder investors are taking a second look at this once-stodgy retailer.