If you're looking to invest in stocks positioned to benefit from a literally game-changing technology, check out stocks of biotechs that are focused on gene editing. The future of medicine is likely to be radically transformed by therapies that involve the insertion, deletion, or replacement of DNA. 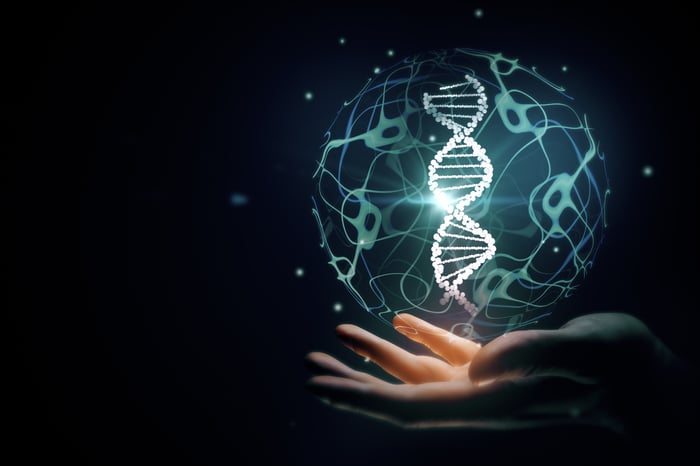 Sangamo Therapeutics is by far the biggest winner among gene-editing biotech stocks right now. Its share price has nearly quintupled over the past 12 months. The biggest catalyst for Sangamo has been its partnership with giant drugmaker Pfizer (NYSE:PFE).

On May 10, 2017, Sangamo announced an exclusive licensing agreement and collaboration with Pfizer to develop gene-editing therapies for hemophilia A. The deal included co-developing SB-525, one of Sangamo's four lead candidates. In August, the two companies announced that the first patient had received treatment in a phase 1/2 clinical study evaluating SB-525 in treating hemophilia A -- a historic milestone for gene therapy. And just a few days ago, Sangamo and Pfizer a collaboration for gene therapy to treat amyotrophic lateral sclerosis.

Sangamo also partnered with Bioverative on ST-400, a gene-editing therapy targeting treatment of beta-thalassemia. A phase 1/2 clinical study is expected to start in the first half of 2018. In addition, Sangamo is moving forward on its own in early-stage testing of SB-318 in treating mucopolysaccharidosis type I (MPS I) and SB-913 in treating MPS II, also known as Hunter syndrome.

Editas Medicine stock is performing quite well also. The biotech stock is up more than 90% over the past 12 months. And most of those gains came in just the last month.

What happened to light a fire beneath Editas stock? The company presented encouraging data from proof-of-concept experiments in using gene-editing therapies for treating sickle cell disease and beta-thalassemia at the American Society of Hematology in early December. Editas also probably benefited from another biotech, Spark Therapeutics, announcing a price tag of $850,000 for its gene therapy for treating blindness. Editas has its own gene therapy for treating another genetic cause of blindness that could potentially begin clinical studies later this year.

As of now, though, Editas has no pipeline candidates in clinical studies. The company does have multiple pre-clinical programs targeting genetic diseases including sickle cell disease, beta-thalassemia, cystic fibrosis, and Duchenne muscular dystrophy. Editas also partnered with Juno Therapeutics on use of gene editing of T-cells in treating cancer.

Intellia Therapeutics stock is up more than 60% over the last 12 months. While Intellia's stock performance lags behind both Sangamo and Editas, the biotech has something in common with both companies.

Like Sangamo, Intellia has a partnership with a large drugmaker. Regeneron (NASDAQ:REGN) and Intellia are working together to develop gene-editing therapies to target treatment of up to 10 indications -- five of them liver-related. Intellia is also collaborating with Novartis in using gene editing in hematopoietic stem cells and chimeric antigen receptor T-cells.

But Intellia's approach to gene editing uses the same technology as Editas -- CRISPR/Cas9. Intellia's founder, Jennifer Doudna, was a pioneer in developing the CRISPR-Cas9 approach, which uses a bacterial enzyme to cut selected parts of the genome. Also like Editas, Intellia's pipeline candidates are all still in pre-clinical testing.

At first glance, Sangamo might appear to the best stock to buy. After all, the biotech is farther along in development than either Editas or Intellia. It wouldn't be too terribly surprising if Sangamo's big partner, Pfizer, had interest in an acquisition at some point.

Intellia is the least expensive of the three, though, with a market cap of around $960 million. The biotech's relationship with Regeneron could lead to tremendous developments in the future.

My favorite gene-editing stock, however, is Editas. Sangamo and Editas have similar market caps of near $1.5 billion. But Editas claims something that no other biotech does: Rights to patents for use of CRISPR-Cas9 in humans that have been upheld in court already.

Sangamo's approach for gene editing uses zinc finger nuclease technology, an older approach that's more expensive and unwieldy to use than CRISPR. Most other biotechs focusing on gene editing, however, use CRISPR-Cas9 -- and that could mean that Editas will be sitting in the catbird seat as gene-editing therapies are marketed.

I also like that Editas doesn't yet have a big partner. That could make the biotech an acquisition target for multiple larger companies down the road. I suspect that all three of these biotechs will be winners over the long run, but my money is on Editas.