In 2017, Packaging Corporation of America (NYSE:PKG) found favor with investors, as a return to growth catalyzed a total return of 45% in "PKG" shares over the course of the year. It's probably not reasonable to expect quite as much appreciation again this year, but the company is certainly capable of logging another positive performance. There are several strategies that are boosting Packaging Corp of America, but does the stock's current valuation suggest that shares have become too expensive for comfort?

Implementing a plan to deal with sluggish growth

Packaging Corp of America manufactures and sells its products within two major segments: packaging, which encompasses corrugated-packaging products, and paper, in which the company manufactures uncoated free-sheet paper (i.e., reams of packaged printing paper sold in office supply stores). Between them, the two segments comprise the lion's share of company revenue: Packaging accounts for roughly 82% of revenue, and paper products contribute approximately 16% to the company's top line.

To put 2017 in context, we have to look back a few years to late 2013, when Packaging Corp entered the free-sheet paper business upon its acquisition of Boise Paper for $2 billion. This has proved to be a difficult market to thrive in, as demand for free-sheet paper has gradually deteriorated over the last several years. For example, industrywide uncoated free-sheet paper shipments dropped 3.4% in 2016, and pricing per ton declined nearly 2%, according to the company's most recent annual report.

As a result, though the Boise purchase added over $2.1 billion to the Packaging Corp's top line, the company's revenue base remained static for three years post-acquisition, with annual sales hovering around $5.8 billion in 2014, 2015, and 2016. 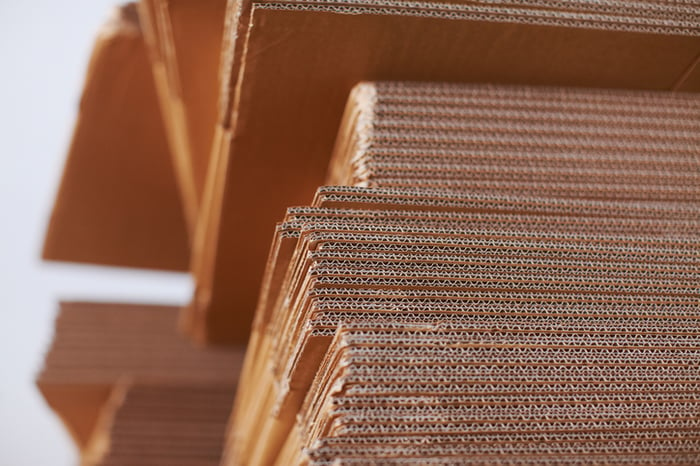 In 2016, Packaging Corp resumed acquisitions, with a focus on its traditional business of containerboard manufacturing, which outputs the corrugated material consumers think of as cardboard box packaging. New deals have been smaller, "bolt-on" additions of smaller competitors. The company bought corrugated-products producer Tim-Bar Corporation for $386 million in August 2016, and snapped up corrugated manufacturer Columbus Container for $100 million in November 2016.

Packaging Corp followed these acquisitions with the purchase of another corrugated-paper specialist, Sacramento Container Corporation, for $265 million in October 2017.

All three deals turned out to be efficient from a financial perspective. Tim-Bar, Columbus Container, and Sacramento Container were acquired at the low price-to-EBITDA multiples of 4.3, 3.3, and 5.0, respectively. Better yet, each transaction was immediately accretive to (i.e., improved) earnings.

As a result of these acquisitions on favorable terms, as well as productivity improvements, revenue increased during the first nine months of 2017 by nearly 11%, to $4.7 billion, and operating income rose 16% to $679.2 million.

The organization's resource shift toward packaging makes much sense, as global demand for corrugated products is forecast to expand at a compounded annual growth rate, or CAGR, of over 4% for the next several years. Factors driving demand include an increase in retail display packaging and, of course, the rise of e-commerce-driven package delivery.

Packaging Corp plans to sell further into this demand by converting a machine currently producing 200,000 tons of free-sheet paper per year at its Wallula, Washington, mill, into a system making 400,000 tons of 100% virgin kraft linerboard per year, by the second quarter of this year. While this conversion will benefit the integration of the Sacramento Container purchase, it will also effectively trade paper capacity for production of higher-demand corrugated products.

Given investors' enthusiastic reaction to Packaging Corp's renewed growth and higher profits last year, does the stock's phenomenal one-year rise make it prohibitively expensive today? For an answer, we can look to two peer companies that I discussed last year as solid dividend investments within the packaging industry (alongside Packaging Corp): Avery Dennison (NYSE:AVY) and Sealed Air Corporation (NYSE:SEE). Priced at roughly 19 times forward earnings, Packaging Corp is well in line with its peers: 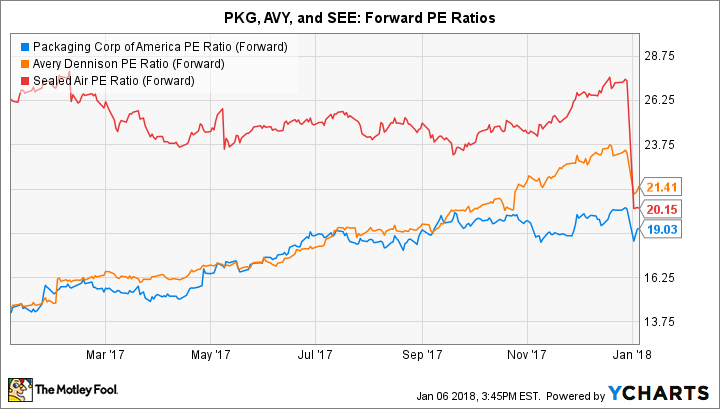 The company is also valued at par with the overall industrials sector of the S&P 500 index, which currently trades at an aggregate forward price-to-earnings ratio of 19.5.

Thus, despite its run-up over the last 12 months, Packaging Corp still has space to climb -- and trade at a premium to the market -- if it maintains its revenue and earnings momentum. While investors shouldn't expect a repeat of last year's dizzying leap, Packaging Corp's current strategy certainly provides a sturdy foundation for further appreciation in the months ahead.