Last year was a tumultuous one for Nordic American Tankers Limited (NYSE:NAT), with the oil tanker company shedding nearly three-quarters of its value. Several factors contributed to the devastating slide, including plunging dayrates for tankers, which forced the company to take drastic action to shore up its financial situation.

The oil tanker market was excruciatingly volatile last year. Shipping rates started the year on a high note, with Nordic American Tankers noting that its vessels were pulling in an average of $25,000 per day in early 2017, which was well above the $16,700 to $21,000 per day they collected in the second half of 2016. However, market conditions quickly deteriorated, and by the second quarter, dayrates had fallen to $16,100 per vessel. That said, since Nordic American Tankers had the lowest cash breakeven level in the tanker industry at $11,500 per day, it was still making money. 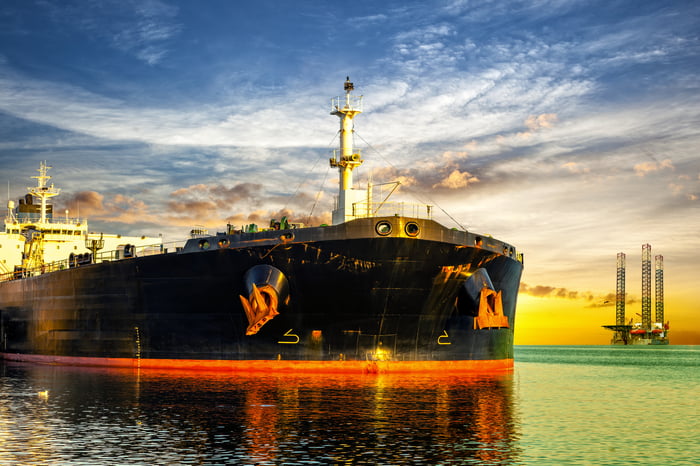 Conditions went downhill dramatically by the third quarter, with rates falling to just $10,600 per day. That timing couldn't have been worse because the company was in the process of raising capital to finance three newbuild ships scheduled for delivery in the second half of this year. While Nordic American Tankers signed a full financing agreement for those vessels in the fourth quarter of last year, one of the stipulations was that it needed to raise more capital to bolster its balance sheet, which had $341.5 million in debt.

The company completed one part of that recapitalization in mid-December by selling $110 million in stock, which would give it the cash to pay down some of its debt. That stock sale, though, was highly dilutive to existing investors since it sold 40 million shares at $2.75 apiece. That pricing was significantly below $3.66 per share at which it traded before the announcement while the newly minted shares represented a boatload of additional stock for a company that had less than 102 million shares outstanding at the end of the third quarter.

When Nordic American Tankers ordered its three newbuild ships in 2016, the company thought that the deal would enable it to grow earnings and the dividend as they came aboard in 2018. But due to a significant shift in market conditions, it had to scramble to secure financing for those vessels last year while also shoring up its balance sheet, paying a high cost in the process. While those moves put its financial situation on a firmer footing, this isn't a stock for the faint of heart, with the company reminding investors last quarter that "the tanker environment may change quickly and unexpectedly, up or down."