Things looked bleak for Skechers (NYSE:SKX) a year ago with weak third quarter 2016 results, a reduced outlook, and the stock hitting 52-week lows.

Fast forward to today, and growth has returned in a difficult domestic market, the company's international business is firing on all cylinders, and its financials have improved. Here's how the stock delivered a market-beating run in 2017. 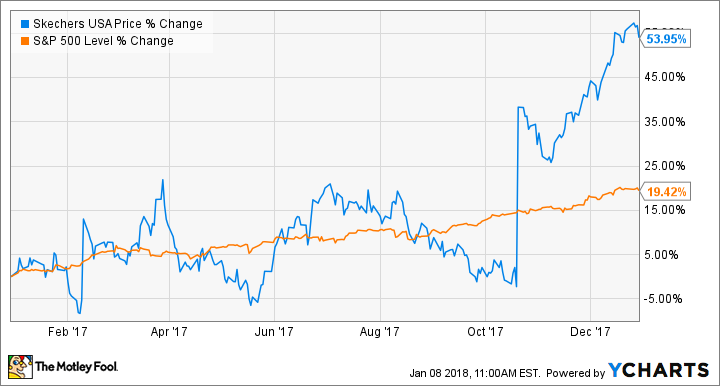 In February, Skechers announced its third consecutive quarter of negative growth in the domestic wholesale business. At the time of the announcement, domestic sales still made up more than half of the top line. While the international business offset domestic weakness, management understood the importance of restoring this business.

Product line refreshes across all segments and a focus on maintaining Skechers pricing in a promotional environment was key in turning the results around in the U.S.

Skechers saw positive year-over-year gains in the U.S. for the next three quarters, which contributed to record overall revenue for the company. In the most recent quarter, the company put up positive results across the board domestically in wholesale, company-owned retail, and same-store comps for company-owned stores. As commentary for the most recent quarter's results, chief operating officer David Weinberg talked about the company's domestic strategy:

We're very happy keeping the market share we have, growing it by low to mid-single digits at the minimum until all that competition goes away for whatever reason, and then maximize our position.

While success in the U.S. was important, the company's international growth drove the market beating returns for the stock. 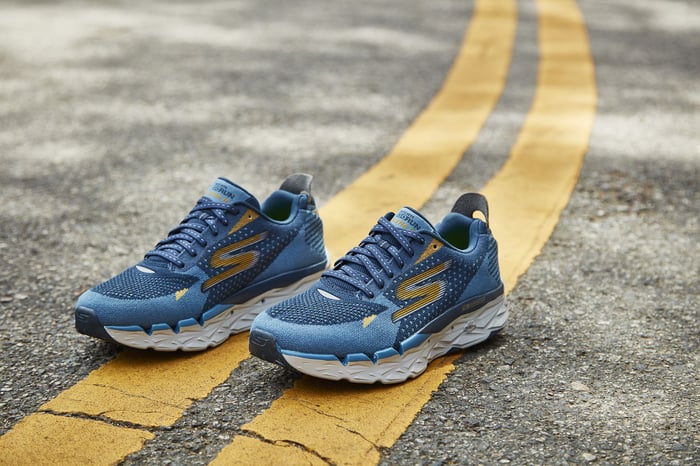 Skechers powers its growth abroad with concept stores that showcase the breadth of the company's products, provide critical local customer feedback, and create excitement around the Skechers brand. Once these concepts stores are in place, the company is able to grow quickly through joint venture relationships that take advantage of local management and a reduced capital investment for the company.

This strategy has been especially successful in China where the company has grown retail doors to 2,339, up 26% over the last year. Combined with a renewed focus on e-commerce efforts, Skechers sold an impressive 54% more pairs of shoes in the region during the third quarter than the previous year. Management expects China to be a $1 billion market in less than three years, which is double the expected sales for 2017.

Gross margin grew to 47.5% in the third quarter, up from 45.6% in the prior-year period. The main reason for the increase is that the company's two fastest-growing segments (company-owned retail and international wholesale) have higher gross margins than the domestic retail segment. With the current growth rates, gross margin should continue to creep up as long as costs can stay in line.

The company currently has an impressive $803 million of cash and cash equivalents on the balance sheet with minimal debt of $82 million. Tim Green called out Skechers excess cash position early last year, but the company hasn't moved to repurchase shares or pay a dividend to shareholders. With its aggressive global growth plans and continued challenges in the U.S. with brick-and-mortar retail, I'm comfortable with Skechers holding that cash on its balance sheet.

The company saw declines in earnings per share through the first half of the year, but everything clicked in the most recent quarter. Record revenue combined with impressive gross margins and expense management as the company improved earnings 40%. And it doesn't stop there -- the company is projecting a significant growth in EPS in the fourth quarter of 125% to 250%.

Strong results in 2017 rewarded Skechers shareholders with market-beating returns, but the stock still trades at a discount to the overall market. Impressive results have created a stronger company all around, and I wouldn't be surprised if 2018 brings a repeat performance for Skechers.

Up 54% in 2017, Skechers Stomps Out a Solid Year @themotleyfool #stocks $SKX Next Article
Current