AK Steel Holdings Corporation's (NYSE:AKS) stock had a disastrous 2017, falling a painful 45% over the 12-month span. In fact, it would have been even worse if not for a 30% rally in the last two months of the year. To give you an idea of how bad it was, United States Steel Corporation (NYSE:X), probably its closest peer based on the pair's underlying businesses, ended the year up around 6%.

AK Steel has been facing headwinds since the end of the 2007-2009 recession, when a long steel industry downturn hit. The mill bled red ink each and every year between 2009 and 2016. It's possible that 2017 will be the year that changes the streak, but we'll have to wait till the company releases full-year results at the end of the month to find out. Through the first nine months of the year, AK Steel's earnings were at $0.37 a share. However, it's lost money in the fourth quarter of each of the last two years, with a 2015 fourth-quarter loss of $0.81 a share. A relatively strong fourth quarter would be enough to turn the corner here, but it's also entirely possible that 2017 will have been another year of red ink. 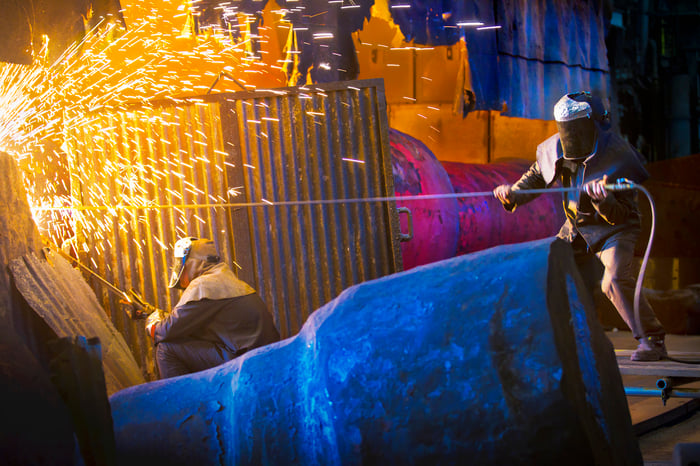 That's really just a symptom of the bigger issue, however. The company is simply muddling through while others in the industry are thriving. For example, Nucor Corp. (NYSE:NUE) has posted positive earnings every year since 2009, with 2017 set to see a big gain over 2016. This mill earned $2.48 a share in 2016, but through the first nine months of 2017, it had already earned $2.90. It expects fourth-quarter earnings of around $0.50 a share, so there's no question that Nucor will see a huge bottom-line improvement year over year.

To be fair, part of the difference between Nucor and AK Steel is the businesses backing their steel production. Nucor uses electric arc mini-mills, which are easier to ramp up and down with demand. AK Steel uses blast furnaces, which require high utilization rates to turn a profit. U.S. Steel uses blast furnaces as well, which helps explain why U.S. Steel posted a string of red ink following the recession just like AK Steel.

A notable headwind for the entire industry has been an influx of cheap foreign steel, pushing industry prices down and satisfying demand that might otherwise have flowed through to AK Steel's order book. That trend continued in 2017, though a broad steel rally at the end of the year was driven by hopes that China will curtail production, helping to alleviate the global oversupply, in an effort to reduce pollution in the giant Asian nation. 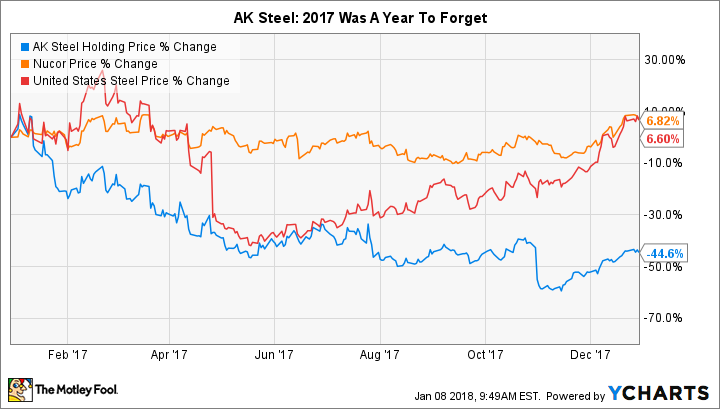 But even that doesn't change the fact that AK Steel has been struggling to make ends meet for years. It also still has a heavily leveraged balance sheet, with negative stockholders' equity, meaning that debt makes up more than 100% of the capital structure (excluding noncontrolling interests). Interest expense, meanwhile, ate up roughly 45% of the mill's operating profit through the first nine months of 2017. That number at Nucor was roughly 1%, which helps explain why investors are less than pleased with AK Steel's stock.

In fact, long-term debt was higher at the end of the fourth quarter than where it started the year. That's the wrong direction and one of the reasons why investors have been leery of AK Steel's shares. When you add in relatively weak earnings and the heavy use of blast furnaces, you start to see why 2017 wasn't such a great year for the stock. A lot needs to go right for AK Steel to turn its business around.

If steel demand and prices head higher in 2018, AK Steel will be a major beneficiary. A large enough improvement could also mean that the mill's bottom-line results will move solidly into the black. That will likely lead investors to push the shares higher, and rightly so.

However, AK Steel remains laden with debt in what is a highly cyclical industry. If that doesn't change, the next downturn will hurt just as much, if not worse, than the last one. Although leading steel industry names like Nucor aren't cheap today, most investors would be better off waiting for a cyclical price pullback in the best companies rather than trying to ride a recovery in AK Steel's stock. It's not worth the risk since AK Steel is still dealing with a weak financial foundation.