Shares of footwear company Crocs (NASDAQ:CROX) climbed on Monday after a guidance update. Crocs boosted its fourth-quarter outlook for revenue and gross margin, and sees operating expenses declining for the full year. The stock was up about 8.3% at 3:40 p.m. EST after being up as much as 11% earlier in the day.

Crocs now expects to produce fourth-quarter revenue between $195 million to $198 million. That's up from a previous guidance range of $180 million to $190 million, and represents about 5% year-over-year growth at the midpoint. 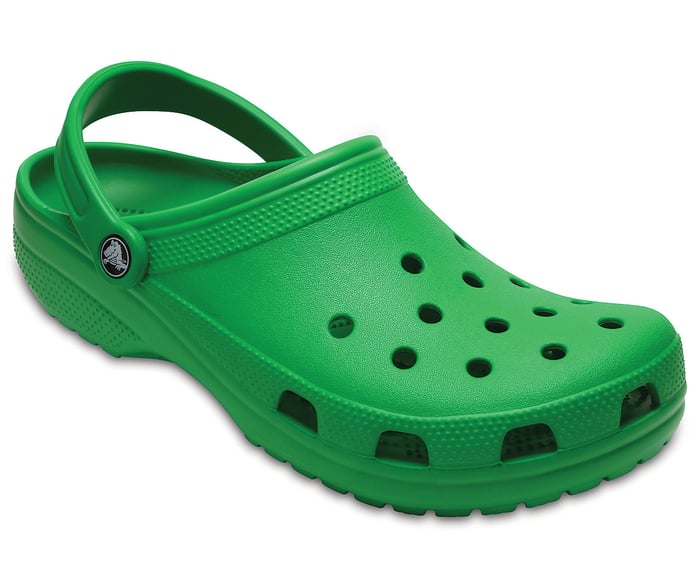 Crocs also increased its guidance for fourth-quarter gross margin. The company now expects gross margin to be approximately 45%, a 200-basis-point improvement over its prior guidance and a 300-basis-point improvement compared to the fourth quarter of 2016. Selling, general, and administrative costs for the fourth quarter are expected to be flat. One-time charges should land at $8 million, about $6 million above its previous guidance.

For the full year, Crocs left its revenue and gross margin guidance unchanged. The company forecasts revenue to be down a low single-digit percentage and for gross margin to be at 50%. SG&A expenses are predicted to reach $498 million, down from $506 million in 2016.

The fourth quarter is seasonally weak for Crocs, which explains why the guidance boost didn't lead the company to raise its full-year outlook. At the midpoint of the new guidance range, the fourth quarter would account for just 19% of annual revenue.

Still, the increase in guidance is good news, especially since Crocs is struggling to grow revenue. Revenue will still be down for the full year, but this could be an indication that the company is nearing a return to growth. E-commerce was a bright spot during the latest quarter, and that may be the case in the fourth quarter as well. We'll have to wait for the first half of this year to play out to see if this truly marks the end of Crocs' revenue struggles.