For Amgen (NASDAQ:AMGN), 2017 contained a mix of good news and bad news. Revenue was essentially flat year over year, mainly because of slipping sales for the biotech's two top drugs, Enbrel and Neulasta. However, earnings increased as Amgen controlled costs effectively.

CEO Bob Bradway emphasized the positives during his presentation at the annual J.P. Morgan Healthcare Conference on Tuesday. He highlighted the company's successes in 2017, stating that they put Amgen in a strong position for 2018 and beyond. Here are five things Bradway said that you'll want to know about the biotech's future. 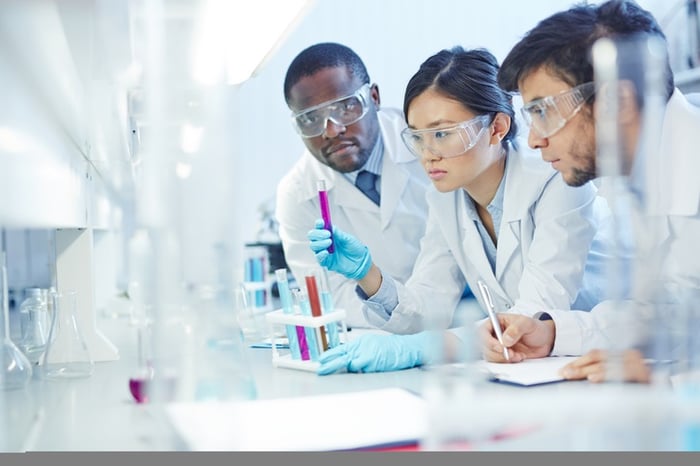 Although Bradway didn't predict how Amgen would perform financially this year, he reiterated Amgen's commitment to post double-digit non-GAAP EPS growth on average through 2018. The consensus analysts' earnings estimate is for Amgen to increase earnings only slightly in 2018 compared to 2017.

Bradway also said that company is on track to reduce costs by around $1.5 billion by 2018 (including reductions in previous years). These cost reductions will help Amgen achieve its goal of non-GAAP operating margin between 52% and 54%.

How will Amgen grow? Bradway identified five products that he stated would be "compelling long-term growth drivers" for the company. Topping the list was osteoporosis drug Prolia. It's currently Amgen's fastest-growing blockbuster.

Next up was Repatha. The biotech reported positive cardiovascular outcomes data for the drug in 2017. Bradway stated that the addition of this data to Repatha's product label should help push sales higher. He also said that the most important barrier for Repatha right now was limited access for patients, and that improving this access was a key priority for Amgen.

Kyprolis, Aimovig, and biosimilars rounded out the list of growth drivers cited by Bradway. Kyprolis hasn't yet been the major success that Amgen hoped for when it acquired Onyx Pharmaceuticals several years ago. However, the company hopes to add new overall survival data to the product label later this year, pending FDA approval. Aimovig is Amgen's first entrance into the neuroscience market. The migraine drug could be a blockbuster for Amgen and its partner, Novartis.

Although sales are falling for autoimmune disease drugs Enbrel and Neulasta, Bradway stressed that these two and other older drugs will remain important to Amgen. He said the company expects these drugs to "generate strong cash flow for many years to come."

Bradway also noted that Enbrel has U.S. exclusivity through 2029. He also said that the company will continue to make strategic investments in Enbrel, pointing to Amgen's launch of a new reusable auto-injector with a new formulation.

4. Returning capital to shareholders is a top priority

That sustained cash flow from both old and new drugs will allow Amgen to keep returning capital to shareholders as a top priority. Bradway stated that "capital allocation is a forethought, not an afterthought" for the biotech. He mentioned that Amgen had returned $34 billion to shareholders since 2011, with $21 billion of share repurchases and $13 billion of dividend payouts.

Bradway said that tax reform has "strengthened [Amgen's] hand" with respect to its financial flexibility. Amgen's dividend already ranks as one of the fastest-growing on the market. Bradway hinted that more dividend hikes could be on the way.

5. What kinds of acquisitions Amgen will look for

He stated that there are four things Amgen will look for in any deal. First, the company wants to acquire innovative products that complement Amgen's six areas of therapeutic focus. Second, Amgen would like to accelerate its international strategy. Third, the biotech wants to "leverage [its] transformation skill set." Finally, Bradway said that Amgen's primary focus for any deal would be to create long-term value for shareholders.

The key takeaway I had from Bradway's presentation is that, although its heady growth days may be in the past, Amgen is committed to doing what it takes to deliver solid returns for investors. Last year, my colleague Sean Williams gave 10 reasons Amgen could be "the world's most perfect stock." I wouldn't go that far with Amgen, but I think there remains a compelling reason to like the stock -- especially for income investors.

Editor's note: A previous version of this article stated that Amgen would achieve double-digit earnings growth and cost reductions of $1.5 billion in 2018. Amgen subsequently clarified that these were average and cumulative goals, respectively, between 2013 and 2018. The Fool regrets the error.