Please ensure Javascript is enabled for purposes of website accessibility
Log In Help Join The Motley Fool
Free Article Join Over 1 Million Premium Members And Get More In-Depth Stock Guidance and Research
By Keith Speights - Updated Sep 29, 2017 at 11:59AM

Score a big win for AbbVie.

One major cloud that has been hanging over AbbVie (ABBV 1.13%) is how long the company will be able to hold off biosimilar competition for its top-selling drug Humira. Amgen (AMGN -0.03%) won FDA approval last year for Amjevita, its biosimilar to Humira. However, Amjevita hasn't reached the market yet due to AbbVie's legal challenges.

AbbVie's management team has stated in the past that it would be able to protect Humira from U.S. competition through 2022. On Thursday, the company took a big step in delivering on its promise by announcing an agreement with Amgen that will prevent Amjevita from being sold in the U.S. until 2023. AbbVie stock jumped around 6% on the news. But just how good is the deal with Amgen? 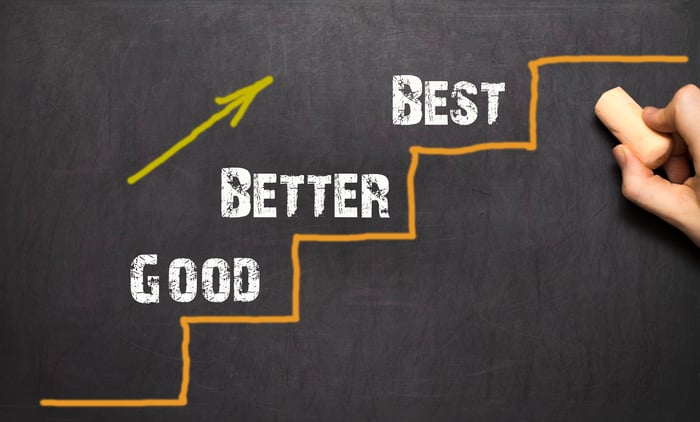 It's important to understand the background behind what was going on with AbbVie and Amgen. The Food and Drug Administration approved Amjevita in September 2016. However, the FDA focused on clinical equivalence to Humira and not on questions about patent enforcement.

Although some key patents for Humira have expired, AbbVie has another 61 patents for the drug that are still in force. So AbbVie almost immediately went to court to assert its intellectually property rights. Had Amgen attempted to launch Amjevita, AbbVie would definitely have sought a preliminary injunction to keep Amjevita off the U.S. market until the matter could be settled in court.

As it turned out, Amgen didn't try to begin selling its biosimilar. The two companies were scheduled to head to court in November 2019, but that trial won't be necessary now. According to AbbVie, "All litigation pending between the parties will be dismissed, and Amgen has acknowledged the validity of AbbVie's intellectual property related to Humira."

What it means for AbbVie

The great news for AbbVie is that it won't have competition from Amgen's biosimilar in the U.S. until 2023 -- just as the company promised. Even better, Amgen will pay royalties to AbbVie on all global sales of Amjevita as a result of the company's acknowledgement of AbbVie's intellectual property rights for Humira.

Note, however, that AbbVie's agreement with Amgen doesn't prevent others from trying to dethrone Humira. Case in point: Boehringer Ingelheim won FDA approval for its biosimilar to Humira in August. Quite a few other companies also have Humira biosimilars in development.

But AbbVie's deal with Amgen shouldn't be underestimated. Full details of the agreement remain confidential, but the fact that AbbVie stock went up a lot more than Amgen stock did shows which company won the skirmish. Amgen is a huge company with the financial resources to hire the best legal minds. And its legal team decided that settling was preferable to going to court. I suspect that other drugmakers hoping to compete against Humira in the U.S. with their own biosimilars are having doubts right now about their chances of success.

How will the agreement impact international sales for Humira? AbbVie's executives always talked about fending off U.S. competition; they knew that the drug would inevitably face European challengers -- and sooner rather than later. Amgen and Samsung Bioepis already have secured approval for their Humira biosimilars in Europe, while Novartis submitted for European approval for its biosimilar product in June.

Roughly one-third of total Humira sales come from markets other than the U.S. Don't expect that revenue to dry up overnight. As a case in point, look at autoimmune-disease treatment Enbrel. Pfizer has commercialization rights to the drug outside of the U.S. and Canada. Even with multiple biosimilars to Enbrel on the market in Europe, the drug's sales in the first half of this year were less than 20% below the prior-year period.

I think AbbVie is sitting pretty right now: It is is able to keep Amjevita off the U.S. market for more than five years. It stands to make money from all sales of Amjevita. Its intellectual property claims for Humira are bolstered.

Most important, though, AbbVie should now have time for its impressive pipeline to produce a worthy heir to Humira. Autoimmune-disease drugs upadacitinib and risankizumab could take the baton from Humira over the next few years. Rova-T could join Imbruvica as another megablockbuster in treating cancer. And these possibilities are just the tip of the iceberg.

Because the details of the AbbVie-Amgen agreement remain confidential, it's hard to say exactly how great a deal for AbbVie it is. However, I would definitely say this is a good deal for the big biotech -- and for AbbVie shareholders.

Editor’s note: A previous version of this article stated that it was unknown how much AbbVie might have paid Amgen as part of the two companies' agreement, because specifics of the deal remain confidential. AbbVie subsequently clarified that no payment is being made to Amgen.