Qorvo (NASDAQ:QRVO) is a leading supplier of chip technology for a variety of connected devices. Its chips are found in Wi-Fi equipment, mobile devices, cars, and smart-home applications.

These markets have helped Qorvo triple its revenue since fiscal 2013, but the stock has been slightly down over that same period as earnings have been under pressure from rising costs. Making things worse is that revenue has begun to stall over the last year, which may signal increasing competition.

Despite those negatives, Qorvo is in the middle of several megatrends, including the Internet of Things (IoT) and smart-home devices. There's also the coming transition to 5G connection speeds.  Given these trends in Qorvo's favor, investors are probably wondering whether the stock is a good bet. Here's a review of key risks to help investors determine the suitability of Qorvo for their portfolio.

One of the main risks for Qorvo is its dependence on one customer -- Apple (NASDAQ:AAPL) -- for a high percentage of annual revenue. In fiscal 2017, Qorvo generated 34% of its revenue from the iPhone maker. In the recently ended fiscal second quarter, that percentage was 40%.

Depending on Apple can have its positives as its iconic brand and high customer loyalty help it sell product. On the other hand, Apple is known for very high standards in quality, and Qorvo is not the only supplier of wireless communication chips competing for Apple's business.

Qorvo's main competitors include Analog Devices, Qualcomm, Broadcom, and Skyworks Solutions (NASDAQ:SWKS). Chip suppliers have to constantly plow a large portion of revenue into product innovation to achieve certain levels of performance, size, and cost. These companies all have resources to equal Qorvo's.

There's evidence that a few of these competitors may be elbowing Qorvo out of Apple's future iPhone plans. A recent teardown of Apple's iPhone 8 and iPhone X shows Qorvo competitors Broadcom and Skyworks Solutions making gains, while Qorvo reportedly is supplying the same number of chips in iPhone 8 as the iPhone 7. It's unclear how much content Qorvo supplied for the iPhone X.

Qorvo has been trying to lessen its dependence on Apple by positioning itself for several megatrends, such as smart-home devices, IoT, and the coming transition to 5G connection speeds. Qorvo also provides chips for internet-enabled cars, and has been finding steady growth supplying chips for the government within its infrastructure and defense products (IDP) segment. However, IDP made up only 25% of Qorvo's revenue in the first six months of fiscal 2018, which ends April 1.

For now, Qorvo is very much dependent on mobile for most of its revenue. While competitors are gaining ground supplying chips for Apple's latest round of iPhones, Qorvo has been struggling to meet expectations in revenue growth and gross margin performance, which signals heightened competition. The following chart shows Qorvo's trailing-12-month revenue and gross margin performance relative to Skyworks Solutions. 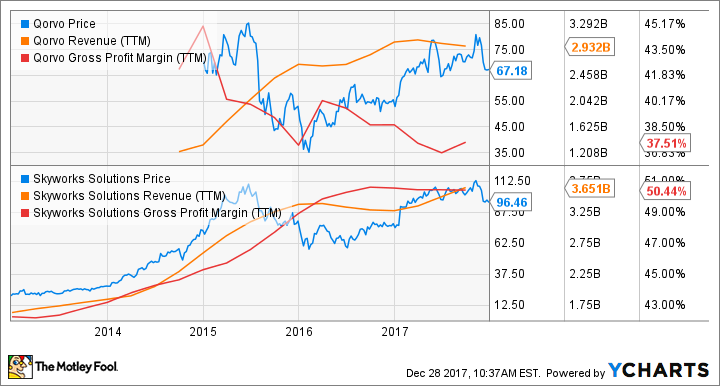 Skyworks has also built a stronger balance sheet than Qorvo. Take a look at this table of comparisons.

Having to pay interest expense on debt while your competitor doesn't is a major handicap in the intensely competitive market of wireless technology. Qorvo is definitely at a disadvantage compared to Skyworks here.

Too much uncertainty at Qorvo

On the bright side, Qorvo has a vast offering of chip products that should serve the company well as wireless technology becomes more sophisticated. This will cause greater demand for faster connection speeds, wider bandwidths, and reliability. The number of IoT devices is expected to grow from 15 billion in 2015 to 75 billion by 2025. That's a growing tide that should lift all boats.

However, like any other industry, there will be companies that perform better than others. Right now, there's a lot of uncertainty at Qorvo given the gains competitors have made at Qorvo's expense. On top of that, Skyworks' superior financial performance places Qorvo in a relatively weak position. I'd avoid Qorvo stock for now.