DISH Network is affected by the same issues that plague the entire subscription-based television industry: revenue pressures from cord-cutting as more are forgoing service in favor of streaming substitutes. As of the last reported quarter, DISH Network reported a total of 13.35 million subscribers in the United States, including the 145,000 subscribers in Puerto Rico and U.S. Virgin Islands the company temporarily removed because of Hurricane Maria. In last-year's corresponding quarter, that figure was 13.64 million, a 2.1% year-over-year decline.

However, this headline number most likely understates the loss in the company's higher-margin traditional television packages. DISH includes subscriptions of its over-the-top SlingTV service in its total television subscription figure. Analysts heavily watch DISH Network's revenue per user for cues on SlingTV's growth because its base package of $20 per month is significantly lower than DISH's traditional television packages. In the third quarter, DISH Networks' revenue per user dropped from $89.44 to $87.23, a 2.5% decrease.

The combination of fewer subscribers and lower revenue per user have resulted in four consecutive quarters of year-over-year revenue declines. In fiscal 2017, through three reported quarters, DISH has recorded 4.8% less revenue than in the prior year. 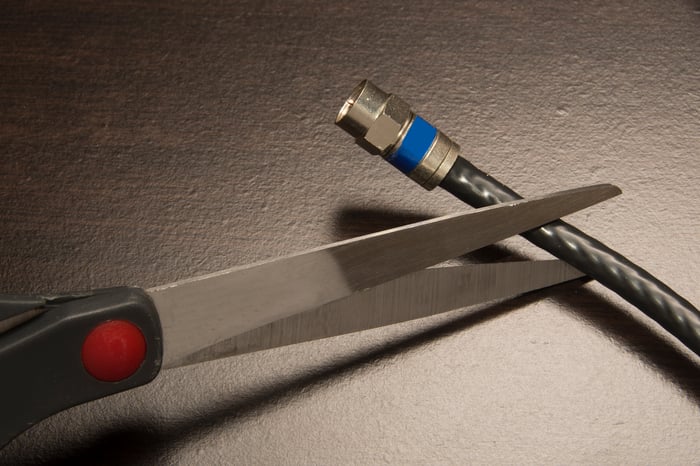 It's likely DISH will continue to face a tough business environment. Marketing analytics firm eMarketer predicts 22 million U.S. adults will have "cut the cord," choosing to go without traditional television, a 33% increase from last year's 16.7 million. This disproportionately affects DISH Network, because unlike competitors AT&T and Verizon that have wireless telephony, landline, and strong ISP business lines, DISH Network is mostly tethered to subscription television.

In the short run, shares of the company could rally, as the GOP tax plan will help high-taxed companies like DISH Network. However, if cord-cutting continues to increase in scope, as eMarketer expects, DISH Network could continue to face a challenging environment for years to come.