Urban Outfitters, Inc. (NASDAQ:URBN) shares finished 23% higher last year, according to data from S&P Global Market Intelligence, on improved performance during the back half of the year and on bullish expectations for a strong holiday season.

Like much of the apparel retail industry, the company benefited from rising comparable sales later in the year. Urban Outfitters stock was down significantly through August but surged to close out 2017. 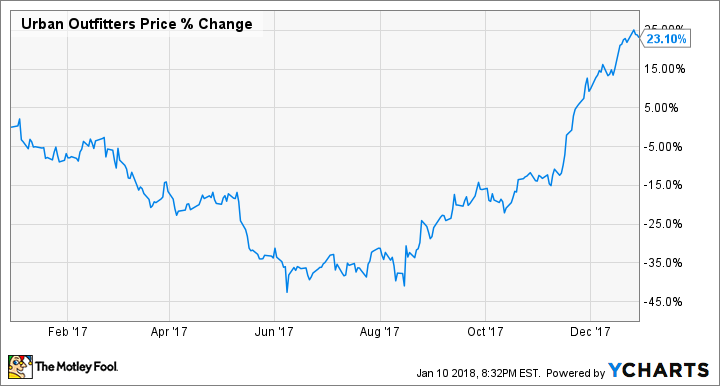 Earlier in the year, the lifestyle and apparel retailer, which also owns Anthropologie and Urban Outfitters, was clearly swept up the broader retail malaise. In March, after the company delivered a disappointing fourth-quarter earnings report with profits falling, CEO Richard Hayne cast doom on the entire industry, saying the country was overstored and that the retail bubble is bursting, the way housing did a decade before.

However, the stock began to bounce back in August, after the company's second-quarter earnings report showed more promise, beating estimates on the top and bottom lines. Shares jumped 17.5% even as comparable sales fell 4.9% across the company, which may be a sign that analyst estimates had become dire. Then, shares jumped on third-quarter earnings, as it seems the growth initiatives the company touted in the August report took effect: Comparable sales increased by 1% and were up in all three of its major brands.

The stock continued to surge to close out the year on high hopes for holiday sales. However, Urban Outfitters now seems to be playing the other end of the expectations game. The stock slipped after the company turned in holiday sales. Though the numbers were strong, with comparable sales up 2% and increasing in all three chains, it wasn't enough to meet Wall Street's expectations. Considering the stock has doubled since its nadir in August, it probably deserves those increased expectations. However, earnings growth is expected to return this quarter. If the company can maintain its current momentum, the stock could return to its winning ways.