Shares of Vail Resorts (NYSE:MTN) tacked on 32% in 2017, according to data from S&P Global Market Intelligence, as the ski resort operator extraordinaire continued to absorb and make acquisitions, grow profits, and build investor confidence.

As the chart below shows, the stock climbed fairly steadily over the year, though it gave back some of its gains in the last couple months. 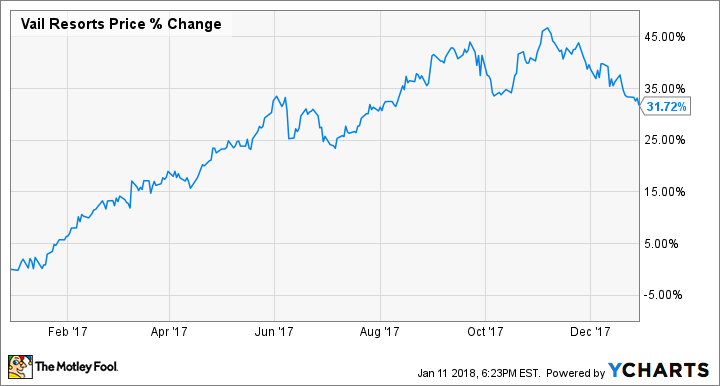 Early in the year, Vail signaled that it would continue its long-standing acquisition strategy when it purchased Stowe Mountain Resort in Vermont, its first property on the East Coast. It was a small deal with a price tag of just $50 million, but gives Vail, which owns mountains all over the West and Midwest, a foothold in the valuable Northeast market as well as an opportunity to market to East Coasters and to combine Stowe with its other resorts in its Epic Pass.

On March 10, the stock jumped 5% after Vail posted fiscal solid second-quarter earnings and raised its dividend by 30%. Revenue increased 20%, boosted by its acquisition of Whistler/Blackcomb the year before, and earnings per share increased from $3.14 to $3.63.

The stock crept higher in April as the company posted full ski-season results with lift ticket revenue up 7.4% even as skier visits declined 2.8%. Nonetheless, CEO Rob Katz said he was "pleased" with the results.

In June, the stock pulled back about 5% after the company missed earnings estimates in its fiscal third quarter, seasonally its most profitable period of the year. Still, the stock returned to growth over the seasonally slow summer months, but slipped in September when fiscal fourth quarter revenue was not as strong as expected, even though the company reported a 23% dollar increase in season passes for the 2017-2018 season.

Finally, the company closed out 2017 with a solid fiscal first-quarter 2018 report in December, though concerns mounted about future growth and valuation, pushing shares lower.

Ski resort operators' results can be difficult to project, as they can be impacted weather, snowfall, and even the timing of holidays. However, analysts are expecting strong growth from Vail, and the company itself sees net income increasing by about a third as it continues to integrate Whistler/Blackcomb and adds Stowe to its portfolio. If it can deliver growth like that, its valuation looks more than justified today.