Retailer Wal-Mart (NYSE:WMT) will receive quite a windfall thanks to the new tax bill. The company paid taxes at a 30% rate in fiscal 2017, well above the new U.S. corporate tax rate of 21%. Wal-Mart operates around the world and pays local and state taxes as well, so we won't know exactly how much the tax bill will boost earnings until the company updates its guidance. But with Wal-Mart recording $6.2 billion of tax expense in fiscal 2017, the savings will be substantial.

Wal-Mart plans to shovel at least some of this tax windfall to its employees. The company announced on Jan. 11 that it will boost the minimum starting wage for all hourly employees to $11 per hour, expand maternity and paternity benefits, and provide bonuses of up to $1,000 for eligible associates. This will result in $300 million of additional costs related to the wage increase and a one-time $400 million cost related to the bonuses. 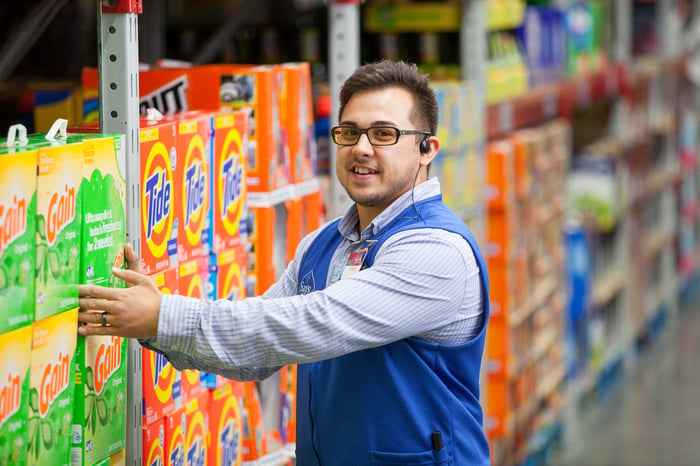 While the wage increase and benefit expansion mean that only a portion of Wal-Mart's tax savings will flow through to the bottom line, investors should be happy with the decision. The previous round of wage increases has helped its stores put up an enviable record of sales growth in a difficult retail environment. These additional investments in its workers will help the company continue that trend.

In early 2015, Wal-Mart announced a plan to raise wages, improve training, boost benefits, and provide more flexible and predictable scheduling for its employees. As part of this plan, the company raised its starting wage to $9 per hour in April 2015, with that wage rising to $10 per hour following a six-month training program.

Shares of Wal-Mart spent the rest of 2015 tumbling, with investors worried about higher costs eating away at the bottom line. The stock dropped more than 28%, a clear sign that the market didn't like Wal-Mart's plan.

Earnings did decline thanks to the wage hike and other investments, but the payoff has been worth the cost. Through the third quarter of 2017, Wal-Mart has reported U.S. comparable sales growth for 13 consecutive quarters. During the third quarter, U.S. comp sales rose 2.7% on a traffic increase of 1.5%. It turns out that paying your workers more and making your stores more pleasant to visit has a positive effect on sales.

The new wage hike is an acceleration of this strategy. CEO Doug McMillon outlined in broad strokes how the company plans to take advantage of its tax cut: "... some guiding themes are clear and consistent with how we've been investing -- lower prices for customers, better wages and training for associates and investments in the future of our company, including in technology. Tax reform gives us the opportunity to be more competitive globally and to accelerate plans for the U.S."

Wal-Mart stock has more than recovered since its 2015 slump. Shares soared nearly 43% in 2017 thanks to consistent sales growth from its stores and a booming e-commerce business. With reports of a solid holiday season for many retailers, Wal-Mart investors will likely get some more good news when the company reports its fourth-quarter results in February.

With Wal-Mart doubling down on the strategy that helped drive its impressive streak of sales growth over the past few years, there's little reason to expect the retailer's momentum to let up anytime soon.