A remarkable start to 2018 continued for stocks on Friday. The Dow Jones Industrial Average (DJINDICES:^DJI) had a 200-point-plus gain for the second day in a row, and the S&P 500 (SNPINDEX:^GSPC) also closed at a record. 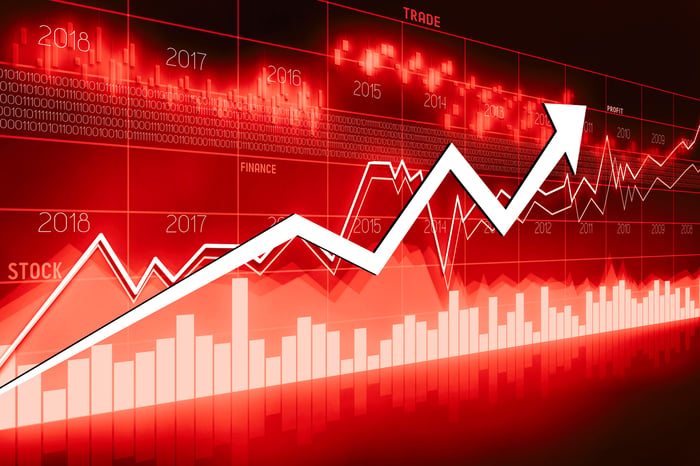 Excluding one-time items such as a massive charge due to the tax bill, banking giant JPMorgan Chase beat earnings estimates, and investors bid the stock up 1.7%. Net managed revenue for the fourth quarter increased 5% to $25.5 billion and earnings per share were $1.07, but would have been $1.76 without a $2.4 billion charge related to the change in tax law. Investors had expected EPS of $1.69 excluding one-time items on revenue of $25.2 billion.

Average core loans were up 6% and net interest income grew 11%, reflecting the benefit of rising interest rates as well as loan and deposit growth. Investment banking was a drag on results, with a 32% decline in profit to $2.3 billion. Fixed income trading was impacted by the new tax law due to losses on tax-advantaged investments, but revenue from that business was still down 27% excluding those effects. The equity trading business was hit with the writedown of a $143 million margin loan to a single customer.

Overall, results were not too different from what the market was expecting. Short-term charges due to the tax bill, softness in the trading business, and longer-term benefits from rising interest rates and lower taxes were the major themes that netted out to a positive outlook going forward.

Shares of investment company BlackRock rose 3.3% after it announced Q4 results that beat expectations on both the top and bottom lines. Revenue rose 20% to $3.47 billion, compared with the consensus estimate of $3.32 billion, and adjusted EPS grew 21% to $6.24 versus expectations of $6.02.

The new tax law resulted in a benefit to BlackRock of $1.2 billion in the quarter, and when included in the results, pushed GAAP EPS up to a whopping $14.07. The company also announced it is raising its quarterly dividend 15% to $2.88 per share, resulting in a yield of 2.1%.

BlackRock's highly successful iShares ETFs continue to draw new investment and grow market share, and fans of the parent company's stock are doing well, too, with shares rising 38% in 2017.