The president is one of the many wild cards that analysts at Citigroup think might drive crude back into the $80s.

Crude prices have been red-hot over the past six months, rebounding more than 40% to well over $60 a barrel, a three-year high. While some analysts believe oil could give back some of its recent gains and head back into the $50s, others see catalysts on the horizon that could push it even higher.

Analysts at Citigroup, for example, recently put out a report listing several wild cards that could drive crude up toward $80 a barrel. Among the most notable was President Trump, who through words or actions could escalate tensions in places like Iran and North Korea. Either scenario, or any number of other wild cards, could cause oil prices to skyrocket. 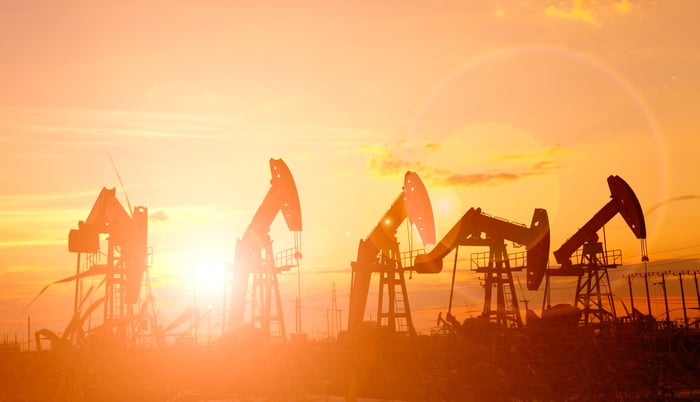 How Trump could affect oil prices

Citigroup noted that President Trump, for example, could make good on his threats to end the controversial Iran nuclear deal, which, among other things, enabled the Middle Eastern nation to increase its oil exports. While recent reports suggest that the president will probably extend the sanction relief, it's still possible that he could reimpose them on the country. If that happened, it would dislocate as much as 500,000 barrels per day of the country's oil exports, which Citi thought would immediately add $5 per barrel to the price of oil.

However, even without an impact from Trump, Iran represents a huge wild card. Current tensions in the country from recent protests could boil over and take a significant portion of the country's oil exports offline. Meanwhile, the nation has long been a threat to cut off the oil flow through the Strait of Hormuz, which could significantly disrupt the oil market.

In addition to Iran, Citigroup also noted that the "rhetoric from and toward North Korea has also escalated in the past few months," with Trump and Kim Jong-un trading incendiary comments, which could ultimately flare up into a military conflict. The risk of war would be likely to prompt nations to stockpile strategic goods such as oil, with that buying causing prices to spike.

It's worth emphasizing out that these are wild card events and not what Citigroup expects to see this year -- although if oil prices do rocket because of some Trump-fueled crisis, that would certainly benefit U.S. oil producers. 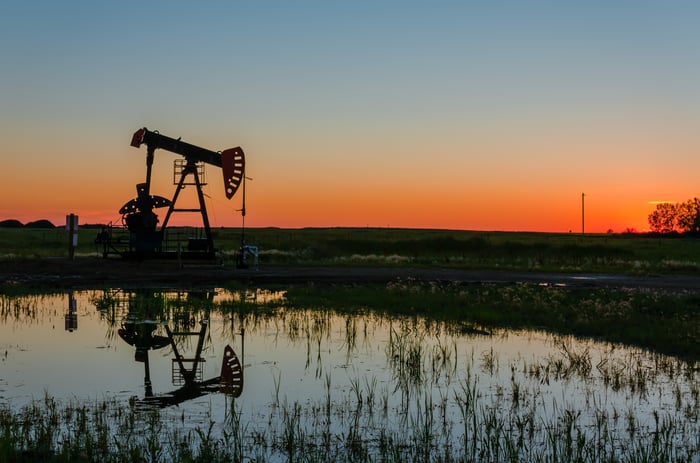 How a Trump bump would affect oil stocks

Among the producers that would see the greatest lift from a return of $80 oil are those that have the lowest production costs and didn't cap their upside by hedging production against falling prices. Three that stand out are EOG Resources (EOG -3.80%), Anadarko Petroleum (APC), and ConocoPhillips (COP -2.37%). All three have gotten their costs down to the point where they can grow production at a healthy pace even if crude is in the $50s. EOG Resources, for example, can increase its oil output by a 15% compound annual rate through 2020 while living within the cash flow it can generate at $50 a barrel. Meanwhile, ConocoPhillips can grow its production by a 5% compound annual rate, while also returning significant cash flow to investors through dividends and share buybacks at $50 a barrel. Finally, Anadarko can deliver 14% oil production growth this year within cash flow at $50 oil.

Because of those sub-$50-a-barrel breakeven levels, this trio would produce a gusher of cash flow if crude pushed toward $80 a barrel, since they don't have any oil hedges that would cap that upside. Contrast this with Pioneer Natural Resources (PXD -1.97%), which had hedged 80% of its oil for 2018 by the end of last year's third quarter, which capped its ceiling on that production at around $58 a barrel. While hedging helped put a floor under Pioneer's cash flow when oil was lower, it now prevents the company from enjoying the full benefit of higher oil prices.

Well positioned even without help from Trump

As with any wild card, it's impossible to predict if President Trump will drive oil higher this year, which is why investors shouldn't buy oil stocks based on that belief. Instead, they should consider oil stocks that can do just fine if oil gives back its recent gains, while also providing unabated upside if it keeps rising. While that's a tall order, ConocoPhillips, EOG Resources, and Anadarko Petroleum all fit that bill, since they've pushed their production costs below $50 a barrel and don't have any oil hedges, which should enable them to do well no matter what happens to oil this year.