Nearly a month since its release, die hard fans and film critics continue to debate the latest Walt Disney (NYSE:DIS) developed entry in the Star Wars saga, The Last Jedi.

The most bearish viewers have pointed to unexplored storylines, missed opportunities for character development, and various plot holes. But has this controversy played out in the film's box office performance?

Make no mistake, The Last Jedi is a financial home run. So far, the movie has generated over $1.2 billion in cumulative box office receipts, and though it remains well behind The Force Awakens, it has surpassed 2016's Rogue One.

By their 25th day in theaters, The Force Awakens had sold over $816 million in tickets; The Last Jedi, $574 million; and Rogue One, $479 million. Regardless of the mixed reception, it's clear there was an audience for this new film. 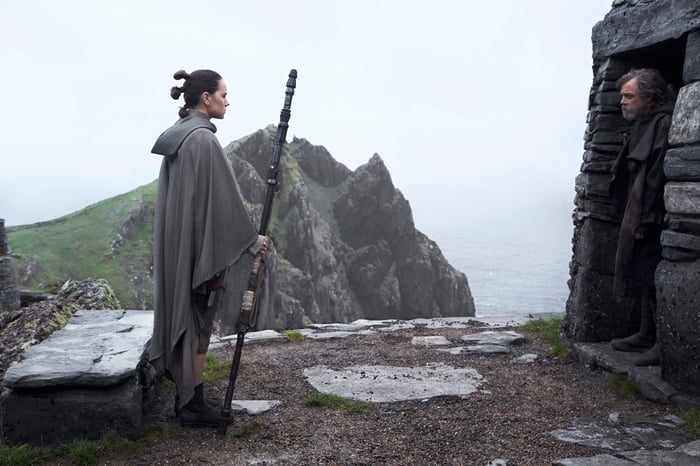 There's no question now that Walt Disney's acquisition of Lucasfilm is still paying dividends. Even when the deal was first announced, the market didn't see it as the same risky venture when the entertainment giant took over Marvel for a similar amount. In a few short years,Disney-produced Star Wars films have topped $4 billion at the box office -- matching what the company paid for the franchise in 2012.

And Star Wars will have a trickle-down effect for companies that ride the coattails of each release. Toymaker Hasbro (NASDAQ:HAS), for example, benefits whenever a Star Wars film is released, but the popularity of the movie will determine just how big the impact will be. After the 2015 release of The Force Awakens, Hasbro's partner revenue surged 68% that year, while the following year, segment revenue was up only 28% for Rogue One.

Disney's own earnings, which should be reported early next month, will also reflect these nuances. While they'll undoubtedly get more of a lift from The Last Jedi than they did from Rogue One, keep in mind the new film is still tracking at just over half the box office draw of the first sequel.

It was reported in 2015 that George Lucas was unhappy with the direction Disney was taking the Star Wars saga. He complained that they wanted to make "retro" movies that borrowed heavily from the original film, rather than go in new directions, and that's how things appear to be playing out.

Even so, Disney is looking to the future. It will be exploring the backstory of popular character Han Solo with the May 25 release of Solo: A Star Wars Story. The film will cover events before the original Star Wars trilogy, and it'll be followed by the late 2019 release of the still-unnamed Episode IX, the final film of the new trilogy.

Although there's speculation that film could mark the end of the Skywalker line of movies -- George Lucas had always envisioned nine movies in the saga -- Disney is exploring how to carry the franchise forward with new casts of characters well into the next decade.

And it's not just movies, but as has long been the case with Star Wars, there are TV shows to come. In addition to the animated titles that you can currently find like Clone Wars and Rebels, a live-action series is expected for the company's upcoming streaming service.

The Last Jedi may have been one of the weaker installments in the franchise, arguably among the worst according to some fans, but it's still a massive hit for Disney. The new trilogy has already set the stage for the entertainment giant to build a new legacy around it that will carry on well into the future, likely winning new legions of fans and perhaps equally important, generating billions more in revenue for the company.