Despite headlines of a robust employment market, job creation in 2017 was somewhat tepid. Overall, approximately 2.06 million jobs were created during the year, the lowest total since 2010, when the United States was muddling through the effects of the Great Recession. Last year, the economy produced 8% fewer jobs than in the prior year, and 31% fewer jobs than in 2014, the decade's high-water mark with 3 million new jobs. Economists point to multiple reasons for the slowing pace of job creation. The most credible is that the United States is nearing full employment -- when virtually everyone who wants a job and is willing to work is employed. An economy without a supply of workers cannot create jobs. While the low unemployment rate of 4.1% partially supports this thesis, the number of the underemployed, sluggish wage increases, and low labor-force participation rates dispute it.

When looking deeper into the data, one industry is noticeably underperforming, and appears to be a key reason for slowing job growth: retail. 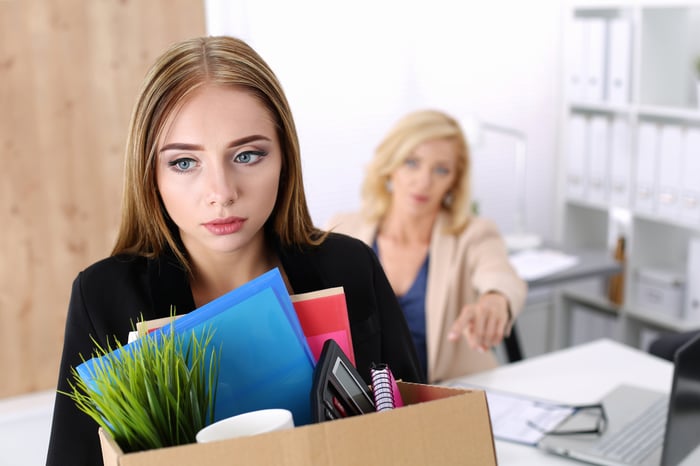 Traditional retail is still in a recession

In 2017, approximately 20 traditional (brick-and-mortar) retailers filed for bankruptcy protection. Even retailers not filing for bankruptcy are rapidly closing underperforming stores. By mid-December 5,000 physical store locations had reportedly closed during the year.

Unsurprisingly, job losses accompany store closures. A 12-month chart from the Bureau of Labor Statistics shows that retail continues to struggle. Out of 14 major industries, only two had job losses: retail trade and information, which includes subsectors such as publishing and telecommunications. Retail's loss of 67,000 jobs was by far the biggest: 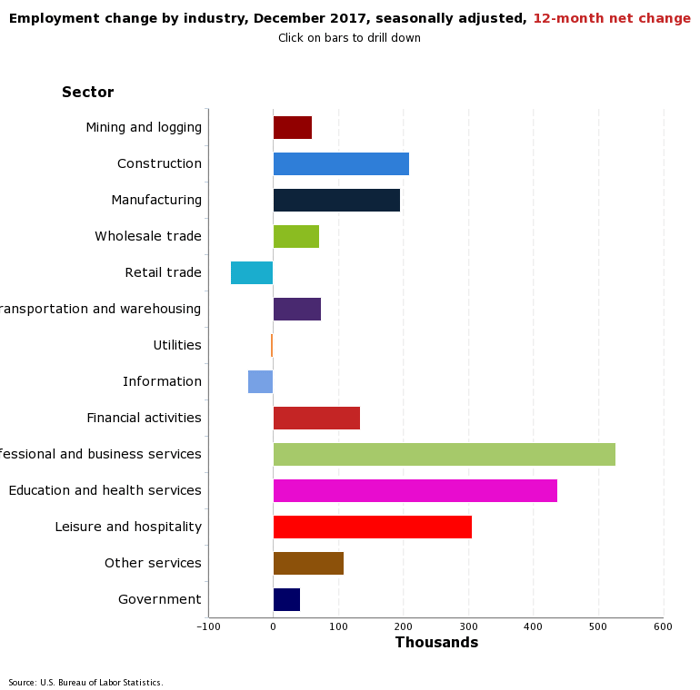 Unless you're living under a rock, you know e-commerce is the biggest reason for traditional retail job losses -- and Amazon.com (NASDAQ:AMZN) factors prominently in the story. A recent report from e-commerce analytics firm One Click Retail found Amazon was responsible for 44% of all U.S. e-commerce sales last year.

Retail employment has a lot further to fall. First, retailers have announced more than 1,000 store closures in 2018 already, with Sears Holdings announcing it would close more than 100 Sears and Kmart locations this year. Ascena Retail Group, the parent company of The Loft, Lane Bryant, and Ann Taylor, plans on closing nearly 700 locations in the next two years.

The United States already has a problem with too much retail space. In 2015, a report from analyst firm Cowen and Company found the United States had 23.5 square feet of shopping-center area per person, 43% higher than the second-highest country, Canada. The three European countries with the largest shopping area per capita, the United Kingdom, France, and Spain, have significantly less shopping square footage per person -- 4.6, 3.8, and 3.4, respectively.

At first glance, it would appear the retail apocalypse is bad news for the economy. With 15.8 million workers, traditional retail is the fifth-largest industry, according to the Bureau of Labor Statistics. However, it appears e-commerce is creating jobs in other industries. As The Wall Street Journal notes, employment in the transportation and warehousing sector rose 74,000 in 2017, which was more than enough to offset the losses in retail. While presumably not every hire is directly attributable to e-commerce, it's likely many of these jobs at least partially support internet retailing.

Amazon's also doing its part directly, by hiring at a rapid clip. Last January, the company said it would create 100,000 full-time U.S. jobs by mid-2018. In the third quarter, it revealed it had created 300,000 jobs over the past year. While the figure does include the increased headcount from the Whole Foods acquisition-- approximately 90,000 -- it still reflects impressive jobs growth. The company is planning to add a second headquarters, which will increase headcount in the years to come.

So, yes, Amazon is hurting traditional retail but doing an admirable job directly hiring employees and creating a network of suppliers, making the company a minor headwind to total job growth. Look for both trends to continue in the years ahead.