By many standards, American Express (NYSE:AXP) had a fine 2017. Profitability was strong and more often than not beat analyst expectations, while other crucial metrics -- revenue, loans outstanding, and net income (i.e. cardholder) -- have all improved notably of late.

Shareholders are coming back to the stock after its unhappy divorce from top partner Costco Wholesale (NASDAQ:COST); AmEx shares rose by 34% over the course of 2017, handily beating the S&P 500. Stocks tend to trade on what's ahead, though, not what's in the rear view. With that in mind, does 2018 promise to be not only a better year, but the best one in the company's history? 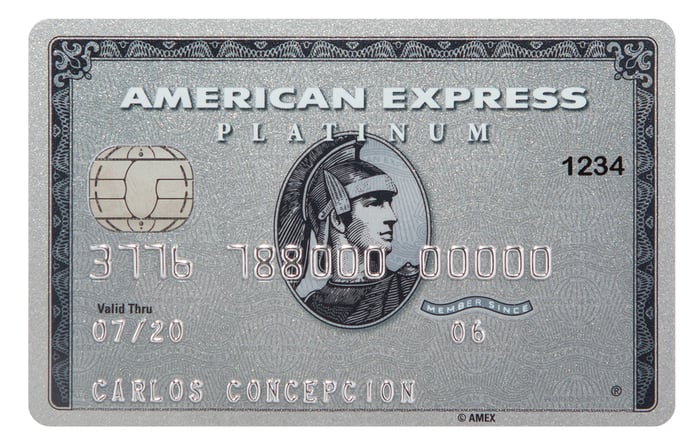 2018 will certainly be memorable and different for AmEx. It's getting a new chairman and CEO, current vice chairman and company veteran Stephen Squeri, at the beginning of February. AmEx isn't a company that likes shuffling its leadership -- outgoing chairman and CEO Kenneth Chenault has been in those posts since 2001.

Squeri inherits a company on the rise. Under Chenault, American Express has held its own in the face of competition not only from eternal rivals Visa (NYSE:V) and Mastercard (NYSE:MA), but also cutting-edge 21st-century payment processors.

It's done so largely by exploiting its strength -- the exclusivity of its card, and the benefits that come with it. The company boosted its investment into cardholder (or "member" in AmEx-speak) rewards by 21% on a year-over-year basis in its most recently reported quarter, to $1.9 billion (total consolidated expenses, however, only rose by 6% to $5.8 billion).

These tailwinds should propel it further -- on average, analysts are projecting a 15% earnings per share improvement in 2018, on a top line that should rise by around 6%. If these growth rates are achieved, they would represent at least 25-year highs for revenue and earnings per share for the company.

Not to dampen potentially happy news, but even the company hits these impressive projections, I don't think 2018 will be AmEx's best year ever. In many investors' minds, AmEx will always be The Company That Lost Costco, as that deal was a highly advantageous -- if not the most advantageous in credit card history -- exclusivity deal with a huge retailer.

AmEx has done a decent job scoring new co-branding card partners, but no single one boasts the size and reach of Costco.

Also, while AmEx did well in 2017, its performance wasn't as impressive as Visa or Mastercard, both of which posted certain quarters during the year that were extremely impressive. One big factor in this, as I've written, is that recently the number of debit/credit card transactions exceeded those made in cash for the first time in history.

This favors Visa and Mastercard over AmEx, mainly for the simple reason that they are volume brands. After all, the two do not directly issue cards, but act only as payment processors for their respective brands. Since AmEx is both its own payment processor and card issuer, it has to be more selective about its clientele, and therefore its cards-in-circulation count is much lower.

Although AmEx's stock has risen nicely over the past year, it has been eclipsed by its two big rivals. AmEx shares have increased by 33% over the period, while Mastercard stock has grown by almost 48%, and Visa by over 45%.

Don't read this as a negative take on AmEx stock. I think it's admirable the company has recovered so quickly from the Costco split-up and is posting impressive growth rates. But I believe its performance will continue to be overshadowed by that of Visa and Mastercard and its reputation hampered by the Costco loss.

If and when AmEx has a more stellar year than its two card giant peers, and can perhaps ink a deal as audacious and lucrative as the Costco arrangement, it stands to be a champion in the card segment -- in terms of both fundamental and stock price performance. I don't think the company is quite there yet, so I'd say 2018 won't be the greatest, one-for-the-ages year in its history.