For credit card giant Visa (NYSE:V), 2017 is a hard year to beat. Already huge, the company grew to even more immense size, with several quarters that blew past analyst expectations for growth.

What's particularly admirable about this is that Visa operates in a quickly shifting landscape for commerce, in which electronic payments are becoming the rule rather than the exception. It isn't easy to keep growing when you're massive, particularly when your industry is very much in a state of flux. So given this challenge, what are the chances 2018 will be a banner year for the company? 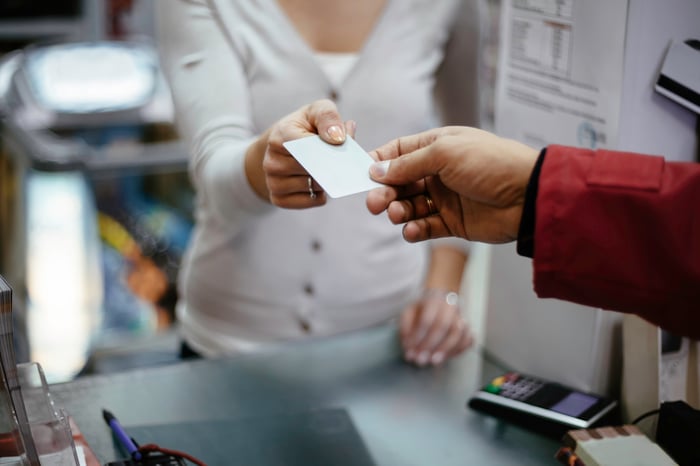 The trends are your friends

2017 saw Visa make a habit of double-digit increases. In nearly every quarter reported during the year, the company improved both its revenue and adjusted net profit figures by at least 10%. Q4 was a good example; for the quarter, Visa's top line expanded by 14% to $4.86 billion, on the back of adjusted payments volume that rose 10%. Adjusted net profit increased by 12%.

The company expects the good times to continue rolling, if not at such a torrid pace. For its current fiscal 2018, it believes revenue will rise by a high-single-digit percentage rate, with adjusted per-share net profit advancing at the high end of the mid-teens (although we should keep in mind that Visa is an aggressive buyer of its own stock, which is why its share count keeps falling; this boosts EPS growth).

Several very positive factors are propelling the fundamentals upward. The global economy as a whole is improving; even historical laggards like Europe are starting to post more meaningful growth figures. Meanwhile, the world continues to move away from cash as a payment medium and toward more convenient alternatives like -- yes -- debit and credit cards.

I'd hesitate to call this a payment "revolution," but there's no denying a permanent change is well under way. A recent study by researcher Euromonitor International found that for the first time in history, in 2016 the number of card transactions eclipsed those made by cash. There's no going back; this dynamic will only continue to develop in favor of plastic.

That is very much to the advantage of the mass card payment companies, i.e., Visa and archrival Mastercard. As "open-loop" operators, their brands are much more prevalent throughout the world than those of their peers.

A report in WalletHub citing end-2016 figures put the global totals for cards in circulation at roughly 335 million for Visa and 200 million for Mastercard. By contrast, both American Express and Discover Financial Services came in at around the 50 million mark.

So, all other factors being equal, I believe that Visa stands to gain the most from this shift toward payment cards.

Given these considerable tailwinds, it's no accident that Visa -- and Mastercard, while we're on the subject -- has been posting such robust growth recently. Meanwhile, numerous prognosticators are modeling significant top-down growth in several key factors.

A Nilson report forecasts that the number of payment cards will increase by 16% from the end of 2015 to 2020, and it's safe to say a great many of those rectangles will bear market leader Visa's brand name. Meanwhile, the International Monetary Fund predicts that global GDP will rise a very healthy 3.7% in 2018.

So, numerous signs indicate that Visa has more high-growth quarters ahead of it. I wouldn't be surprised at all if 2018 indeed turns out to be its best year yet.