To paraphrase Ben Franklin, nothing in this world is certain except for death, taxes...and your morning coffee. Indeed, many (myself included) can't imagine facing the day without a few cups.

No company in the world has successfully exploited our dependence on coffee more than Starbucks (NASDAQ:SBUX), which has grown to 27,000 locations in 75 countries. Having achieved such massive scale, the company's days of double-digit annual revenue growth appear to be over. But that doesn't mean Starbucks is no longer a worthy investment. In fact, for investors looking for a steady dividend payer that's likely to increase its dividend over time, Starbucks may be the answer. The fundamentals for sustainable success

The first thing many dividend investors search for is a business that's stable enough to ensure the dividend is secure. With Starbucks, that's a fairly easy call.

The business is essentially a bet on the world's enduring caffeine habit. Starbucks sells an in-demand product that's virtually guaranteed not to go out of fashion. With its ubiquitous presence in the U.S. and, increasingly, in cities around the world, the company's sheer scale and brand recognition allow it to succeed in just about any market it chooses to enter.

On its last conference call, Starbucks admitted, however, that it needed to reduce its long-term targets to reflect its more moderate growth prospects moving forward. The company's new goals include:

Assuming it can deliver on them, those are still very healthy growth numbers for a mature, $84 billion company.

A rapidly expanding presence in China

Starbucks already has nearly 3,000 stores in 135 Chinese cities. But the coffee giant believes that the world's second-largest economy, with its proliferating middle class, is a perfect fit for the company's next major expansion. Indeed, last year China was the fastest-growing market for Starbucks with fiscal 2017 same-store sales growth of 7%, compared to U.S. growth of just 3%.

In 2018, the company plans to open roughly 600 new stores in China, with a goal of 5,000 stores there by the end of 2020. And looking longer term, the company believes it's just scratching the surface of its potential, with founder and chairman Howard Schultz stating that he believes that China will ultimately be a larger market for Starbucks than the U.S. Again, for a mature company like Starbucks, this one market alone looks like it will provide a very long runway for future store growth.

All that continued growth potential is good news for a company that offers a nice dividend now, and one that's only expected to increase over time. Starbucks shares currently pay a quarterly dividend of $0.30, or $1.20 per year. Based on the company's share price (at the time of this writing) of around $59, that represents an annualized dividend yield of about 2%.

Of course, that's just the yield if you buy shares today. Assuming no dividend increases, any rise in the company's stock price will result in a lower yield. But there's plenty of reason to believe the Starbucks dividend will rise in the coming years. Since initiating its dividend in 2010, Starbucks has consistently raised its quarterly payout over time, from a split-adjusted $0.05 a share then to $0.30 now -- a 500% increase. 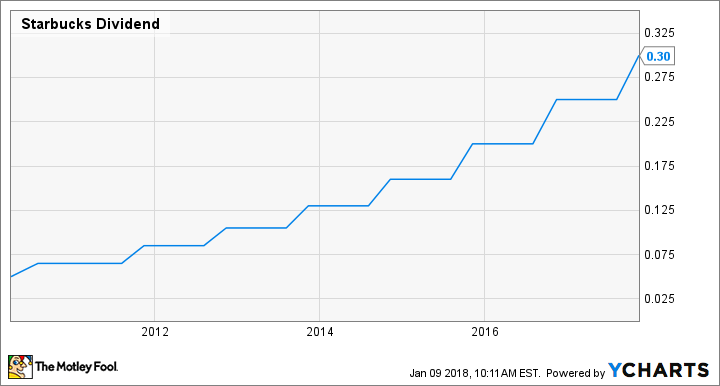 The company's payout ratio -- one way to measure the sustainability of the dividend -- stands at around 50% over the last 12 months, indicating there's still ample room for the company to fund dividend increases from future earnings.

Moreover, as the company's growth slows a bit, the company needs to do something with all the cash it generates. And make no mistake -- Starbucks has signaled that it intends to return larger amounts of it to shareholders over the coming years.

Having returned $3.8 billion to shareholders over the three-year period from 2012 to 2014, Starbucks returned more than double that amount from 2015 to 2017. Moving forward, it expects to return more than $15 billion to shareholders over the next three fiscal years. And while we can't know for sure how much of that will go to share repurchases versus dividends specifically, based on the company's recent history, I think it's a safe bet we'll see continued healthy dividend increases. For shareholders, it's a win-win regardless, as share buybacks simply reduce the number of shares outstanding, making each share worth a greater portion of the company.

One you can own for a lifetime

I believe Starbucks is a solid foundational stock for many investors -- one with relatively low business risk, and the possibilities for outsized rewards given the international opportunities in China and beyond -- and I haven't even mentioned the company's long-term ambitions in tea and food, which could provide some additional growth kickers down the road.

In fact, I believe it's entirely possible that 20 years from now, Starbucks may find itself in the rarified league of Dividend Aristocrats -- those S&P 500 companies that have increased their dividend payouts for 25 consecutive years or more. As the company's presence becomes more and more global, it's hard to envision a world where Starbucks doesn't help fuel the daily routines of people everywhere.