Here's how Starbucks' digital flywheel is still a key catalyst, why Starbucks is betting big on China, and more.

Starbucks' (SBUX -0.33%) fourth-quarter results gave investors a useful glimpse into the coffee retailer's recent performance, putting the spotlight on positive comps and double-digit growth in earnings per share. But it also officially confirmed that Starbucks' guidance for 2017 was simply too aggressive, as full-year results underperformed management's initial outlook for the year.

Fortunately, management gave investors a closer look at its business during its third-quarter earnings call, as well as provided a much-needed update to its long-term guidance. Here's a look at three key takeaways from the earnings call. 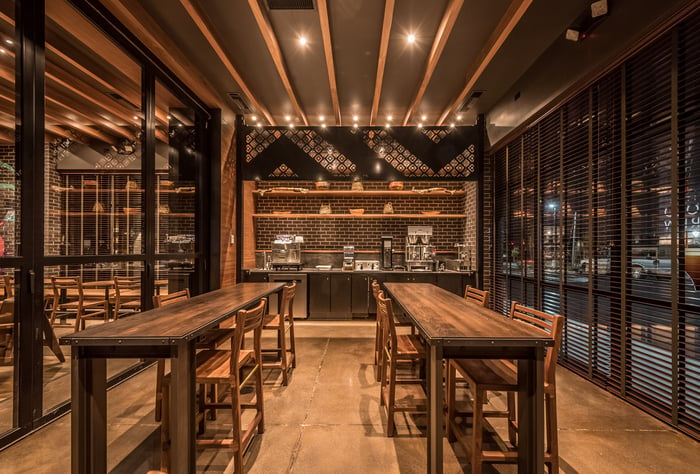 The strength of Starbucks' digital flywheel

Starbucks is regarded as the pioneer in mobile loyalty programs and mobile ordering, proving how a well-executed digital flywheel can help increase sales. But even after years of success in digital, Starbucks' digital flywheel remains paramount to the company's long-term plans -- and it's still driving significant results.

Our priority to accelerate the power and momentum of our digital flywheel reflects the fact that digital relationships are among our most powerful demand generation levers. In fiscal '17, Starbucks Rewards membership in the U.S. rose 11% year over year. Per member spent increased 8% in Q4, alone. The cumulative fact is that today, 36% of tender comes from Starbucks Rewards, the vast majority, via our mobile app.

With this compelling data in mind, Johnson said the company will soon start making mobile order and pay available to all customers -- not just Starbucks Rewards members.

For its long-term outlook, management said it expected same-store comps over the long haul to average around 3% to 5% year-over-year growth. In addition, management said it expected non-GAAP EPS growth of 12% or greater. This compares to Starbucks' global comparable-store sales increase of 3% in 2017, and its 11.4% year-over-year rise in the coffee giant's non-GAAP EPS.

So, how does management justify its optimistic outlook for its business? While Starbucks laid out a range of items to support this outlook, management emphasized two items it expected would contribute meaningfully to this future growth: its China and U.S. markets.

In the U.S., Johnson explained that many of its recent efforts to invigorate its business have been showing early signs of promising long-term opportunities to help further boost sales and improve operations in the market.

"We've got a continuous improvement plan there that shows that we are growing through-put at peak and, at the same time, we're improving the customer experience," Johnson explained. "So, I think that gives us evidence that, certainly, we have line-sight to what we have to deliver to be in that comp range in the U.S."

One of the areas in which Starbucks hopes it sees an incremental increase in both revenue and earnings per share in the coming years is from food sales. And a bullish outlook for how food can impact its financials isn't simply speculation -- it's based on undeniable momentum in food today. Expecting continued innovation in food, drinks, and its digital experience, Ryan said Starbucks is "bullish" on the upside it can achieve in existing stores.

While management's explanations for its rosy outlook for the future are sensible, investors will want to check in on Starbucks' results in the coming quarters to see whether its long-term guidance is as conservative as management suggests it is.