On the surface, Starbucks Corporation's (NASDAQ:SBUX) fourth-quarter results weren't pretty. Revenue was down slightly, net income fell 2%, and earnings per share were flat only because the company bought back shares over the past year.

But before you race to tap the "sell" button on your mobile device, there's some important context about last year and this year that makes a big difference in how you'll view the results: Last year's fourth quarter was a week longer. When we adjust to compare the periods based on that, the results look much more Starbucks-esque, though all is not perfect.

Let's take a deeper look at Starbucks' result, as well as learn what management had to say about its plans for the future. There are some changes as the company adapts to a shifting retail landscape in North America and focuses its sights more tightly on accelerating growth in Asia, particularly China. 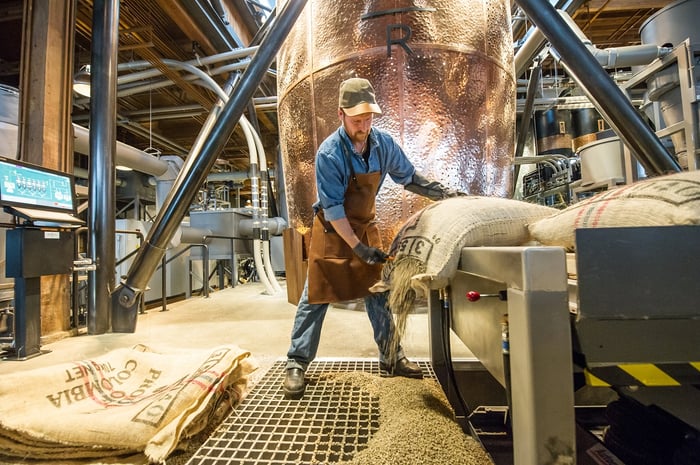 Starbucks reported revenue of $5.7 billion in the fourth quarter, almost exactly the same as last year's quarterly result. However, last year's fourth quarter was 14 weeks long versus 13 weeks this year, due to the way the company's fiscal periods align. When comparing last quarter to the same 13 week period in 2016, revenues increased 8%.

Here's how Starbucks performed on a number of other key metrics, both on a GAAP basis, and adjusting for last year's extra week and some non-recurring items:

While the shorter quarter adequately explains the difference in revenue and to some extent the difference in earnings and operating income, it doesn't explain the compression of the company's margins. We will discuss that later.

Let's take a look at a metric the market loves to discuss: Starbucks' same store sales, or comps. Here's how the company did by region (note: comps only measures company-owned stores during the entire quarter, as compared to the same 13-week calendar period in 2016):

In the earnings preview, I highlighted three things management is focusing on to drive growth, particularly in the U.S. market:

Food sales are also steadily improving. Johnson said on the call that for the first time ever, food sales reached 21% of total sales. It's worth noting that food sales generally carry lower margins than beverages, so over time this could have a negative effect on operating margins, but food sales are incremental to beverages, don't add much time to order fulfillment, and -- maybe most importantly -- are the key to unlocking sales growth during Starbucks' non-peak day parts. On the earnings call, CFO Scott Maw gave some insight into the impact of food sales on operating margins, saying that increased food mix reduced operating margin by 90 basis points in the quarter. But customers aren't buying food instead of a latte, so this is incremental revenue and profit, generally speaking. Management is aiming for food sales to represent 25% of the mix by 2021.

Starbucks hasn't made significant progress on the expansion of its Reserve and Roastery stores just yet, but management did offer some more insight into its plans. The company says it will not only offer Princi -- the italian bakery it recently partnered with -- high-end artisanal foods in each Reserve Roastery (with the first one opening in the Seattle Roastery next week) but that it was also planning to open stand-alone Princi stores which would feature Starbucks Reserve coffees. As things stand today, 2018 is on track to be a big year for it's high-end coffee shops, with Roasteries in New York, Tokyo, Milan, and Chicago all under construction or in development now. This isn't just a U.S. initiative, but it will almost certainly affect the U.S. in a bigger way, at least initially.

Even as management focuses its efforts on leveraging technology and digital relationships with its U.S. customers, China remains potentially the most-important long-term focus for the company. On the earnings call, Maw said that the CAP region generated almost half of the company's non-GAAP operating income growth in 2017. Not only is this market ripe for accelerated expansion, but it's also on track to deliver outsize earnings growth as well.

This is the key behind the company's decision to buy out its mainland China joint venture partner, for $1.3 billion and take full ownership and operating control over the 1,300 stores on the mainland. While the CAP region only generated 2% comps growth in the quarter, China's comps were up 8% on 7% transaction growth. For the full year, China's comps increased 7%. At quarter-end, Starbucks had almost 3,000 stores in China, 550 more than at the beginning of 2017 and well on track to its goal of 5,000 by 2020.

Sales increased 14% in CAP last quarter on a currency-neutral basis, while operating income was up 16%. Moving into next fiscal year, the year-over-year metrics will get a little cloudy, as the company takes on the higher operating expenses by consolidating its Chinese stores, but the increased operating income and cash flows should more than offset that impact.

In addition to the key parts of Starbucks' strategy above, the company announced a few areas where it was making some changes.

First, the decision to sell the Tazo tea brand to Unilever. On the surface, this may seem like Starbucks is abandoning the tea business, after announcing last quarter it would close all 380 of its Teavana retail stores.

However, management said that the reason it was selling Tazo was so that it could focus its resources on Teavana. Despite giving up on the retail loose leaf and bagged tea business, Teavana has proven to be a valuable part of Starbucks' store offerings, regularly adding incremental growth with each passing quarter. The company is also expanding its bottled teas, having entered into a partnership with AB InBev recently to bottle and distribute Teavana-branded bottled teas. Teavana has also proven to be quite popular in China, both in-store and as a bottled beverage at retail.

Starbucks also announced it was going to launch a co-branded rewards credit card with JPMorgan Chase in the near future, with a prepaid card to follow.

In addition, management announced revised long-term guidance. On the earnings call, management pointed out that the last time the company updated its long-term guidance goals was 2010, an eternity for many companies. Since then, Starbucks has more than doubled sales and tripled earnings, while opening an incredible 10,000 new stores.

Going forward, management expects to be able to generate 3%-5% annual comps growth, "high single-digit" annual revenue growth, and earnings-per-share growth of 12% or above. Part of the way earnings are expected to increase at a higher rate than sales will be through continued operating leverage gains, with core expenses only growing at about half the rate of sales and management regularly finding ways to drive cost of goods down as volume grows.

Looking ahead: Next year's targets and an updated "shareholder returns" plan

In addition to moderating the market's expectations for future growth, Starbucks is ramping up its spending to repurchase shares and increase the dividend, with a new three-year plan to spend $15 billion on buybacks and dividend increases. Management has board approval to repurchase up to 80 million shares in place at present. This plan will be partly paid for with debt, as the company says it will increase its leverage slightly to facilitate this plan. Investors should note that the company has already increased its debt about $750 million over the past year, to $3.9 billion, though it also has almost $2.5 billion in cash on the balance sheet.

For next year, management is aiming to reach the aforementioned long-term financial targets, while opening 2,300 net new stores globally. Of that total, 1,100 will be opened in the CAP region, with 600 of those planned for China. This continues the trend of opening more stores in Asia than any other region, and is likely to remain the case for years to come.