Starbucks's big move to acquire full ownership of its mainland China stores is a big step towards offsetting the potential impact of the disruption of American retail. But the real pressures of a changing retail landscape affected the company's profits and led to lowered guidance.

When Starbucks Corporation (SBUX 1.72%) reported third-quarter earnings on July 27, much of the focus was bound to be on same-store sales growth, particularly in the coffee giant's core U.S. market. And while the 5% U.S. comps growth was a solid improvement after three straight quarters of disappointing comps, and China continues to absolutely crush it with 7% comps growth, management said it had concerns about the more-recent trend in the U.S., and reduced its full-year guidance and announced fourth-quarter expectations that led to a 9% beat-down for the stock.

The company also announced it was going to close all 380 Teavana retail stores, as mall traffic declines and the general brick and mortar retail trend more than offset marketing and merchandising efforts to revive sales at Teavana. Add it all up, and fears about Starbucks' ability to maintain the rate of growth it has delivered over the past several years are weighing on the stock, even as management continues to take steps to strengthen the business and adapt to a changing retail world. 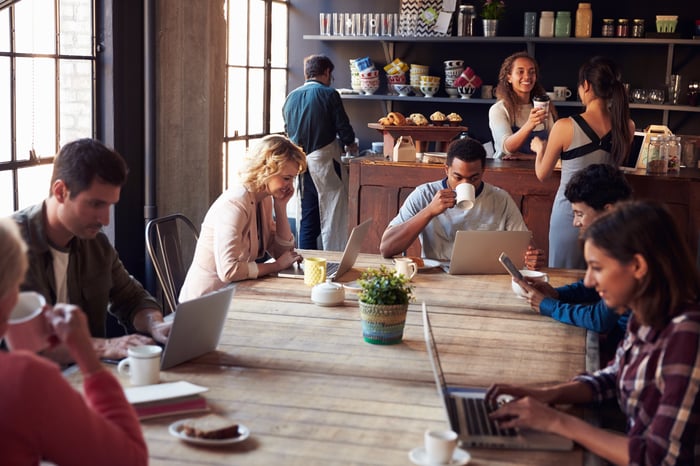 Yet the biggest news -- Starbucks' $1.3 billion buyout of its joint venture partners in mainland China -- may have gotten overlooked by the market's fears that the company won't be able to keep avoiding the demise of American brick and mortar retail for much longer. After all, the financial impact of closing the Teavana stores alone caused the company to report its first quarterly GAAP earnings decline in years.

Keep reading to learn more about Starbucks' quarter, as well as what management is doing to keep the company growing.

Here's are some key financial and operating metrics for the third quarter:

Starbucks' revenue grew at a solid 8% rate in the quarter, reaching record levels. Even with pressure on retail growth, especially in more developed markets like the U.S. and Europe, Starbucks' ability to expand its store count and sales of packaged and bottled products through its retail partners, is still driving sales higher on a consistent basis.

However, the company's earnings -- on a GAAP basis -- fell 8% in the quarter. One of the biggest reasons why Starbucks reported a decline in profits in the quarter is tied to the pending closure of the 380 Teavana retail stores, as the company took $102.3 million in asset impairments in the quarter related to this. Starbucks also took $17.9 million in impairments related to its stores in Switzerland. Combined, this took a $120.2 million pre-tax bite out of GAAP profits.

The company also had several other non-recurring expenses in the quarter as well as one-time gains, including items related to the sale of its German stores to a licensee, items related to the acquisition and integration of Starbucks Japan, and some incremental tax gains that are not recurring.

For this reason, Starbucks also reports the non-GAAP earnings and operating metrics listed above (and more in its full earnings release). While these do not replace GAAP, they serve an important purpose in that they provide a better look at how the company's operations are performing, without any positive or negative impact from non-recurring items. Starbucks' non-GAAP performance was better, with earnings per share increasing 12% and operating margin percent expanding 100 basis points.

Where comps fits in

As I've written about ad-nauseum over the past several quarters, a lot of attention is paid to Starbucks' comps result. And while it's not the only thing investors should pay attention to, it's certainly important. To start, it offers some evidence of the company's ability to raise prices, a measure of traffic health, and a comparison between Starbucks' performance and other retailers.

Furthermore, comps growth is extremely important to the business for two main reasons:

Starbucks' history of very strong comps growth has been a major reason why earnings have increased almost twice as much as sales over the past half-decade. 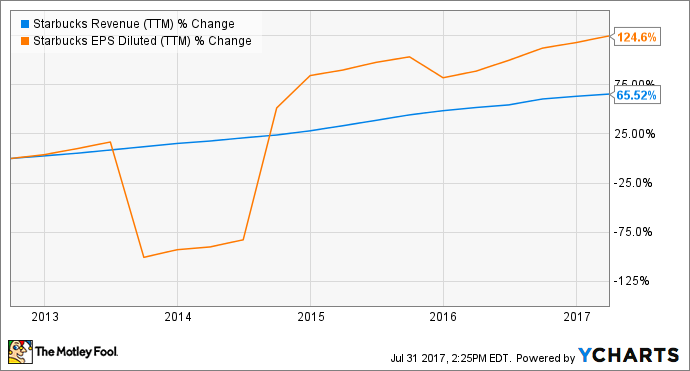 And while consolidated comps increased 4% last quarter, including stellar 5% and 7% growth respectively in the U.S. and China -- inarguably the company's two most important markets -- management's guidance for the fourth quarter and full year were revised down from its prior expectations.

Starbucks' prior full-year guidance was for EPS between $2.06 and $2.10 on a GAAP basis, but management revised that guidance to a range of $1.96 to $1.97 on a GAAP basis, and a $2.05 to $2.06 range on an adjusted basis. Management also said that revenue growth would come in at the low end of its 8% to 10% forecast range, while comps growth between 3% and 4% on a global basis is expected during the fourth quarter. When announcing the lower guidance, CFO Scott Maw said: 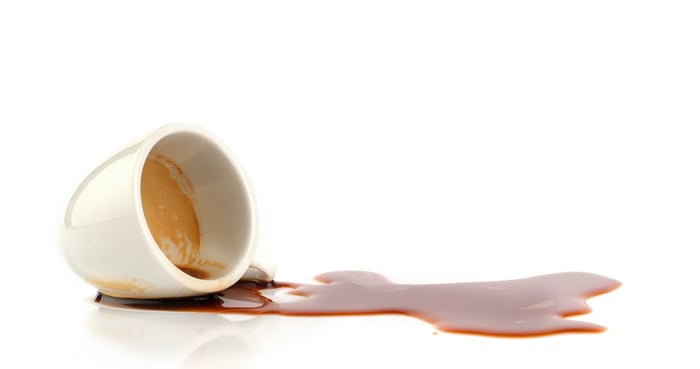 And while Starbucks doesn't rely heavily on traffic from shoppers at other retailers to drive the bulk of its business, it's becoming clear that management isn't going to ignore the impact of e-commerce's disruption of the traditional retail landscape on its own business. After all, the major declines in traffic and sales at malls and shopping centers is a big reason why Starbucks is closing Teavana.

Looking ahead: Investing to fight the retail slump, keep growing

In addition to the company's $1.3 billion investment to take complete control over Starbucks stores in mainland China, management continues to use technology to leverage sales, improve the experience, and drive loyalty from its customers. This includes rolling out Mobile Order and Pay to more of its company-owned stores, increasing the use of mobile pay, and continually working to improve in-store processes related to the "digital flywheel" in order to improve quality, speed, and the customer experience.

The company also continues to invest in food, to grow average ticket price with each customer, but to also grow the "fourth place" concept and draw more customers to Starbucks beyond the peak morning time frame. Growing this business could go a long way toward improving comps and growing operating income.

Starbucks also continues to expand its packaged and bottled products business (under the Channel Development segment) to grow sales of Starbucks and Teavana-branded products at other retail channels. At less than 10% of sales this may seem like a small segment, but it is massively profitable, generating 20% of operating income.

Furthermore, Starbucks plans to expand its high-end Starbucks Reserve and Roastery business under former CEO and still-chairman Howard Schultz. While there will only be a small number of stand-alone Roastery stores, the company plans to open thousands of Reserve bars inside existing Starbucks locations. 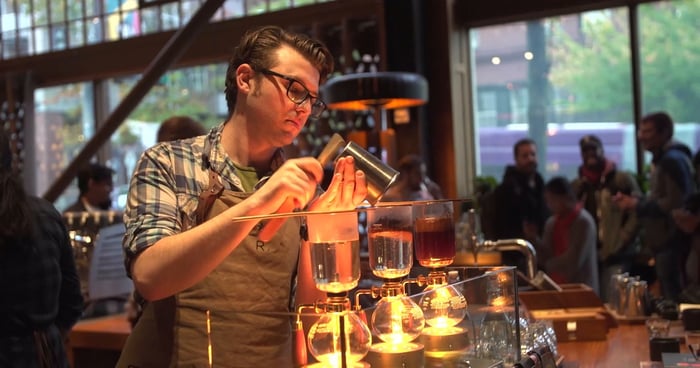 Starbucks is facing the same pressure that is affecting nearly every retailer. While the company has proven very resistant, it isn't immune, and that's why management is taking the previously mentioned actions to offset the loss of casual retail customers and expand into more markets.

There could continue to be pressure on comps in the near term, and that could weigh on profit growth. But few -- if any -- retail operators have the kind of growth prospects Starbucks does. And if management can execute on even a few of the initiatives underway, I think the odds are pretty good we will see years of revenue and profit growth ahead.