Editor's note: An earlier version of this article incorrectly described the relationship between ADT and Alarm.com, calling them competitors. The two firms are technology partners. The article has been updated.

On any drive around well-heeled neighborhoods almost anywhere in the U.S., you'll see lawn signs that say ADT protects the property. The veteran security services company is a dominant player in its industry, and was publicly traded until it was taken off the market by a big acquirer, private equity firm Apollo Global Management (NYSE:APO), in mid 2016

Apollo Global is bringing the company back to the market with a large-scale initial public offering that aims to raise around $2 billion. Here's a brief update about the company and details about its upcoming issue. 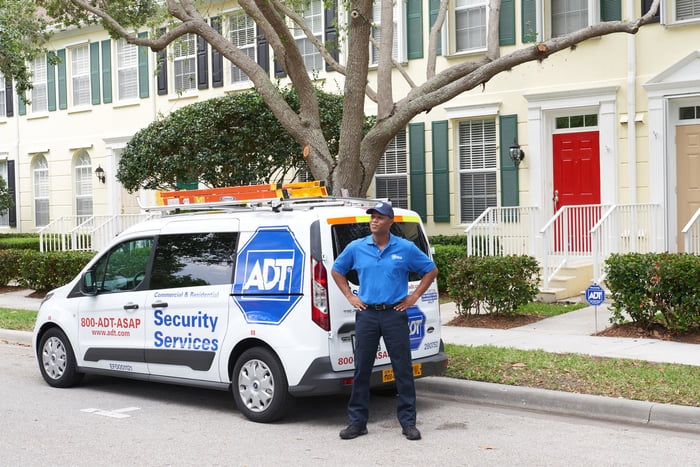 The current version of ADT is larger than its predecessor. Apollo Global purchased the company in a deal valued at $15 billion. It then merged it with a smaller security operator it controlled, Protection One.

Like its antecedent, the current form of ADT is a powerhouse in its business. According to its IPO prospectus, it's "the leading provider of monitored security, interactive home and business automation and related monitoring services in the United States and Canada."

On the basis of security monitoring (its core activity) and related services revenue from 2016, ADT towers above the competition, with nearly $4 billion. The next company, Johnson Controls, is a distant No. 2 at less than $1.3 billion. All told, ADT sales, installation, and service employees visit roughly 10,000 homes and businesses on a daily basis, and its monitoring service responds to around 15 million alarms every year.

ADT's finances are a bit of a jumble, owing to the 2016 buyout and subsequent merging with Protection One. The present form of the company saw its revenue rise by nearly 70% on a year-over-year basis to $3.2 billion in the first nine months of 2017, with net loss narrowing to $296 million from the year-ago deficit of $452 million.

Debt servicing contributed greatly to the bottom-line red ink. This form of the company was burdened by over $10 billion in debt, an amount more than three times the most recent Q1 to Q3 revenue figure.

Its predecessor was burdened by a string of annual losses, although these are nowhere as steep as those of the successor. The most recently reported one (for 2014) was nearly $19 million, on revenue of almost $467 million.

Just over 111 million shares of ADT are being offered at a price between $17 and $19 per share. The stock will be listed on the New York Stock Exchange beginning Friday, Jan. 19. Its ticker symbol will be, yes, ADT.

ADT said it plans to use nearly all of the issue's proceeds for debt retirement. In early 2017, it paid a dividend, and it intends to continue doing so as a publicly traded company. It did not, however, provide an amount or frequency.

The IPO's large underwriting syndicate is led by a pack of joint managers that includes Morgan Stanley, Goldman Sachs, Barclays, and Bank of America Merrill Lynch.

Following the IPO, ADT will continue to be controlled by Apollo Global, which will retain a stake of around 85%.

ADT is a dominant company, and its business is built on a foundation of recurring revenue (from its monitoring services). Investors love this form of revenue, as it's relatively steady and reliable. Around 90% of the company's top line falls into the recurring category.

These strengths don't make ADT unassailable, however. Although the company's presence is strong, a number of determined competitors are taking a piece of the market. This includes companies that haven't historically been involved in the security sector are pushing in.

One example that leaps immediately to mind is cable TV provider Charter Communications. It bundles a set of security features in the connected-home IntelligentHome service inherited from its 2016 acquisition of Time Warner Cable.

In addition to that, I'd also be concerned with ADT's heavy debt load. Success in this business going forward will depend at least partially on innovation, and it's tough to devote funds to this when a big debt monkey is on your back.

So, in spite of the current prominence in its field, I wouldn't consider ADT to be a compelling investment. I feel that the more exciting growth stories will be written by its younger, smaller, and hungrier rivals.