When it comes to investing luminaries, few have had the staying power of Benjamin Graham. He's the man who helped mold Warren Buffett, and his investing classic The Intelligent Investor is still a must-read for any serious investor despite having been published well over five decades ago. So let's take a quick look at military industrial conglomerate General Dynamics Corporation (NYSE:GD) through Graham's sage eyes to see if it's a buy today.

One of the first things Graham attempts to do is differentiate between companies that are appropriate for defensive investors and those that are more speculative. Most investors, in Graham's opinion, should stick with defensive investments. 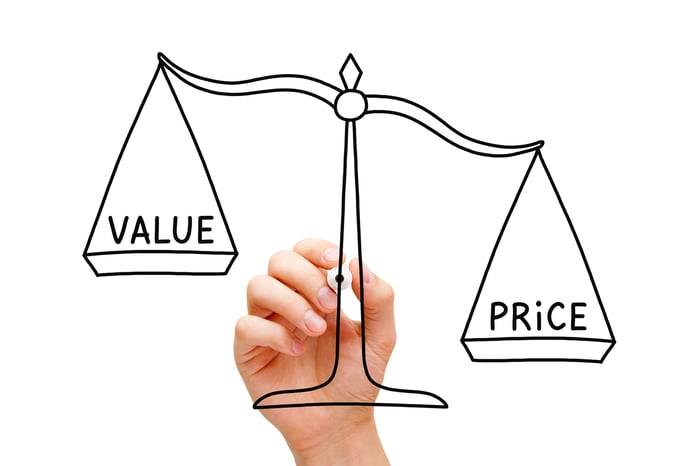 General Dynamics' $60 billion market cap coupled with long-term debt making up roughly 25% of its capital structure easily satisfy Graham's requirement of defensive investments being large and conservatively financed. Put another way, this company could handle some business headwinds without too much difficulty, a fact that's buttressed by its investment-grade credit ratings.

It also passes Graham's requirement for consistent dividends, with 26 years' worth of consecutive annual hikes. That's beyond the 25-year threshold for Dividend Aristocrat status, which very few companies ever manage to achieve. Note, too, that the dividend has nearly tripled over the past decade. Earnings were also very strong over that time, nearly doubling between 2007 and 2016.

General Dynamics is no fly-by-night company, and without even looking at the core business, its financial results tell you that it's a well-run entity. Which leads to the next big question: Is it worth owning? On that front, the answer isn't as good.

...Not a great value

One of Graham's key tenets was that you should only buy a company when its stock is compellingly valued. In other words, he liked to buy great businesses when they were on sale. Even the best company can be a bad investment if you pay too much for it. And right now General Dynamics looks a bit pricey.

The company's price-to-earnings ratio is around 19.9 today. To be fair, that's lower than many of its closest peers', like the 27.3 P/E that Lockheed Martin (NYSE:LMT) is currently sporting. But General Dynamic's five-year average P/E is around 17. So its P/E makes it hard to suggest investors are getting a good price. 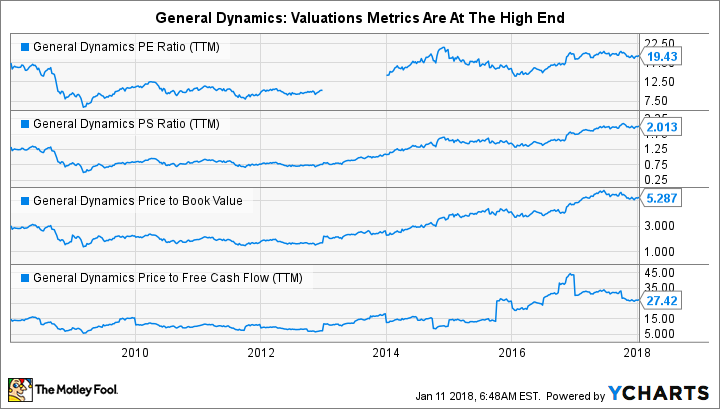 Price-to-book value tells a similar story. General Dynamics' P/B ratio is roughly 5.4, compared to a five-year average of 3.8. Definitely not cheap compared to its own history, even though its current P/B ratio is lower than, say, Northrop Grumman's (NYSE:NOC) 8.4.

Moving on to the price-to-sales ratio, General Dynamics' P/S ratio of 2.1 is above its five-year average of 1.4. Again, the company looks relatively expensive compared to its past. That remains true even though peers Northrop and Raytheon (NYSE:RTN) have P/S ratios of 2.2 and 2.3, respectively. Sure, General Dynamics looks comparatively cheap next to these competitors, but that still doesn't mean it's a good value today.

General Dynamics' price-to-cash flow is also elevated. The company's PCF ratio is around 23.8, compared to a five-year average of 21.3. Peer Raytheon has a higher PCF ratio at 25.5, but General Dynamics hardly looks like a steal at its current valuation.

Step aside for now

To really get to know a company, you need to dig deeper than this top-level analysis. However, Graham's valuation focus can help you decide where to spend your energy on a deep dive. Although General Dynamics is a stock that most investors could feel comfortable owning as a business, it clearly doesn't present a compelling valuation at today's prices. At this point it's probably best that investors take a pass on General Dynamics stock.