Although they're half of the mighty "Big Four" banks that dominate American banking, neither Wells Fargo (NYSE:WFC) nor Citigroup (NYSE:C) is performing at its peak. Wells Fargo has stumbled lately because of a set of apparently rolling scandals; Citigroup still hasn't fully recovered from being one of the hardest-hit financials in the 2008- 2009 financial crisis.

But beaten-up banks can be bargains. Let's take a look at which of these two stocks is the more attractive at the moment.

Citigroup isn't the powerhouse it once was. If we look at its headline numbers, Citi's revenue, profitability, share price, and dividend are still down from their pre-crisis levels. In fact, the company's just-released Q4 results show it booked the deepest quarterly net loss in its history -- a vertigo-inducing $18.3 billion.

But this is nowhere as dire as it seems. As the bank warned late last year, it had to record a steep quarterly charge due to what's essentially an accounting adjustment to the new corporate tax regime. My colleague Jordan Whathen explains the situation in depth here.

That multibillion-dollar quirk notwithstanding, Citigroup has been riding a wave of positive macro- and microeconomic factors, which resulted in a series of earnings beats in calendar 2017.

And if we strip the monster tax charge out of its most recent quarterly results, we can see the bank's performance was respectable. Adjusted net profit came in at $3.7 billion, a 4% improvement on a year-over-year basis, while revenue inched up by 1% to $17.3 billion. Both results exceeded analyst expectations -- net profit convincingly so. Loans and deposits also grew, by a respective 7% and 3%, although Citigroup's loss provisions increased sharply (by 16%). 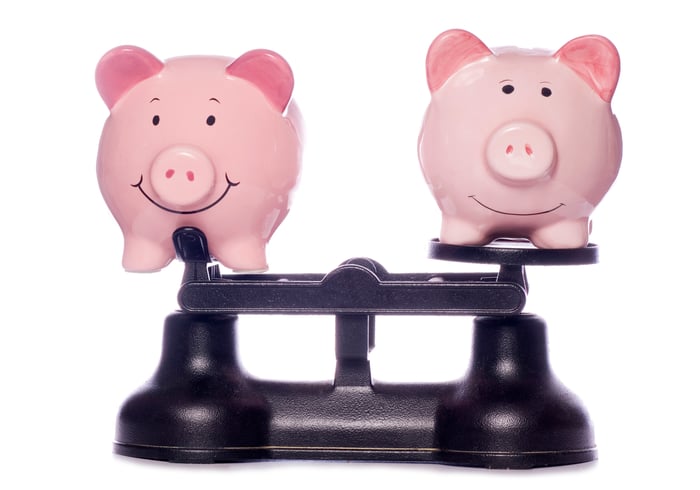 Recent times haven't been as good for Wells Fargo. The company became a big corporate bogeyman in late 2016 for its so-called "fake-accounts" scandal. It came to light that some of the bank's officers opened client accounts that the affected parties neither requested nor approved. Wells Fargo was contrite but apparently didn't learn its lesson; several other controversies have followed in its wake.

This is almost certainly a key reason for the company's uninspiring fundamental performance throughout calendar 2017 -- customers are understandably wary about keeping their money at a bank that misbehaves.

Its Q4 was better, with revenue creeping up by 2% to just over $22 billion, and net income leaping 17% higher to $6.1 billion, or $1.16 per share. Yet revenue missed analyst expectations, and $3.35 billion of the latter was due one-offs. Chief among these was a writedown of its tax liability; like Citigroup, it had to adjust for the upcoming changes in the tax law. In this case, the fix actually padded the bottom line.

Both banks are expected to post higher results in the near future, on the back of growth in the broader economy. The slight edge here belongs to Citigroup; prior to the fourth-quarter results, analysts projected 18% growth in per-share earnings in fiscal 2018, compared to 15% for Wells Fargo. Those prognosticators were also modeling a 4% rise for Citigroup's revenue, compared to 3% for Wells Fargo.

On those estimates and at current valuation levels, Citigroup and Wells Fargo are more or less in the same ballpark. But I'm not convinced Wells Fargo has surmounted its recent difficulties with growth or fully put its malfeasance behind it. As I've previously written, corporate culture takes some time to change. No one should expect the culture that produced those scandals to melt away instantly.

Of the two, I think Citigroup is the one to consider and Wells Fargo the one to avoid. The former is putting its distant past behind it, while the latter is struggling to overcome more recent, deeper troubles. So for me, Citigroup is the more attractive stock right now.