On the last day of trading in 2016, Gilead Sciences' (NASDAQ:GILD) stock price closed at $71.61 per share. Fast-forward one year, and Gilead's share price at the end of 2017 was $71.64. Over the course of a year, investors had gained all of three pennies per share. Of course, the return was better including dividend payments, but it's hard to spin 2017 as a positive year for Gilead Sciences when many other stocks soared.

But Gilead CEO John Milligan has predicted that 2018 will be "the beginning of a growth phase" for the big biotech. If he's right, buying the biotech stock now could pay off. But is Milligan right? Could Gilead be a buy in 2018? 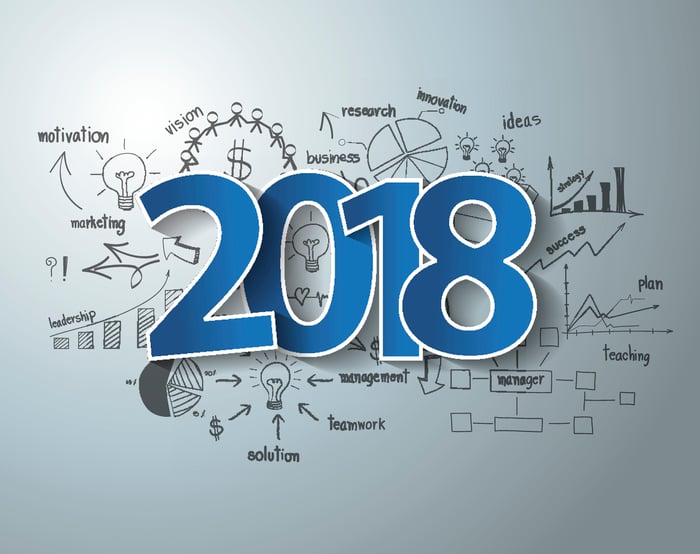 All the reasons to not buy Gilead

Here are the top two reasons you shouldn't buy Gilead stock in 2018: Harvoni and Sovaldi. The two hepatitis C drugs combined generated over $13 billion in 2016. The year before, they made over $19 billion. In 2017, Gilead will probably report combined revenue of around $6 billion for the two drugs.

Will Gilead make up for the loss of roughly $7 billion in revenue from 2016 to 2017 this year? Don't hold your breath. Yes, the biotech does have a couple of newer hepatitis C drugs that are performing well, with Epclusa and Vosevi. However, sales growth from these two drugs still won't be enough to offset losses for the rest of Gilead's hep-C franchise.

In addition, Gilead now has a formidable competitor in AbbVie (NYSE:ABBV). Although AbbVie's Viekira didn't take too much market share away from Gilead, its newer drug, Mavyret, could be a different story. Like Epclusa, Mavyret treats all genotypes of hepatitis C. Even Milligan acknowledges that there will be a head-to-head battle between Gilead and AbbVie.

And if you're counting on Gilead's HIV drugs to make up the gap in 2018, think again. Sure, Genvoya has enjoyed the most successful launch of any HIV drug ever. Gilead also hopes to win FDA approval in just a few weeks for its bictegravir/F/TAF combo, which holds the potential to be the biggest new drug of the year. Remember, though, that these newer drugs will also cannibalize sales of Gilead's older HIV drugs. Some of the growth will be weighed down by loss of sales for drugs such as Truvada and Atripla.

Milligan could be right that 2018 will represent the beginning of a growth phase for Gilead. The bottom line, though, is that the biotech is unlikely to see revenue or earnings growth this year.

Everything you just read is 100% true. However, I think the question about buying Gilead stock in 2018 should be framed differently. Instead of comparing the biotech to its past, investors should look at Gilead's future. And instead of just using a one-year period for evaluating success, investors should have a long-term perspective.

Let's look at Gilead's future. Although hepatitis C sales have plunged, they will stabilize at some point -- possibly later this year. Gilead arguably still offers the best drugs available, even with Mavyret on the market. The biotech should also continue its dominance in HIV with the introduction of the bictegravir/F/TAF combo. This regimen, assuming it wins approval as expected, should be the most powerful treatment yet for HIV.

Even if Gilead's revenue and earnings aren't as high as they were at the peak for Harvoni and Sovalid, they're still impressive. The biotech is likely to generate more than $22 billion in sales in 2018, with earnings topping $10 billion. To put that into perspective, Gilead will probably make profits that are greater than the market caps of all but a dozen or so other biotechs.

And we haven't talked about Gilead's future prospects yet. Thanks to its acquisition of Kite Pharma, Gilead stands as a leader in the promising area of cell therapy. The company is also at the forefront of developing drugs for treatment of non-alcoholic steatohepatitis (NASH), which is rapidly becoming the most serious liver disease affecting Americans. In addition, Gilead's pipeline includes a potential blockbuster rheumatoid arthritis drug in filgotinib.

Finally, there's the company's cold, hard cash. Gilead reported $41.4 billion in cash, cash equivalents, and marketable securities at the end of the third quarter of 2017. The biotech used some of that amount to complete its acquisition of Kite in October. However, with its enormous cash flow, Gilead is still sitting on a huge pile of cash that will only get bigger unless the company does something with its money.

Of course, Gilead won't just sit on its cash indefinitely. The chances are high that Gilead will make more acquisitions, potentially in 2018, that drive future growth.

So is Gilead Sciences stock a buy in 2018? I think it is -- at least for some investors.

If you want a huge pop this year, Gilead probably isn't for you. I suspect the operative word in John Milligan's prediction that 2018 will be the beginning of a growth phase for Gilead is "beginning." However, if you invest with a long-term perspective, Gilead Sciences looks like a bargain right now, considering the biotech's potential.