Baidu, Inc. (NASDAQ:BIDU) stock gained 42.5% in 2017, according to data provided by S&P Global Market Intelligence. The company snapped back after a challenging year in 2016 and recorded solid revenue and earnings growth that paved the way for substantial capital appreciation in a year of strong performance for Chinese tech stocks.

Shares of Baidu actually lost 13% of their value in 2016 amid a medical advertising scandal that resulted in increased scrutiny and regulatory pressure from the Chinese government. 2017, then, was something of a comeback year for the company as it posted a string of year-over-year quarterly sales increases that restored confidence in the business. 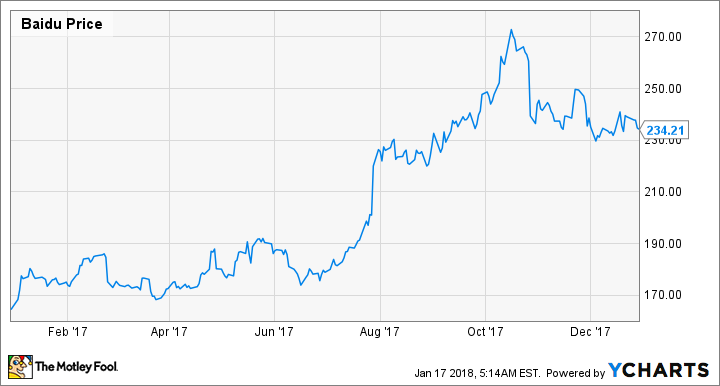 In May, the company released second-quarter earnings results that delivered a 98.4% increase in net income and a return to double-digit year-over-year sales growth. This demonstrated that the search giant could post substantial revenue and earnings growth even as it trimmed its online advertising customer list, and shares climbed roughly 26% higher on the month. Baidu's share price then hit another all-time high in October as anticipation built for its third-quarter earnings release, but the stock sold off after management issued a lower-than-expected sales target for the December-ended quarter.

Baidu has a near-monopoly position among Chinese search engine providers, with somewhere around an 80% market share. That's an advantage that competitors will be hard-pressed to overcome and puts the company in great shape to capture ongoing growth as internet usage increases in the country and advertising spending continues to migrate to digital. Dominance in the search category also gives Baidu access to massive troves of data that are likely to translate into significant advantages in fields like artificial intelligence.

Even after gaining 42.5% last year, Baidu trades at a reasonable 27 times forward earnings estimates and looks like an attractive growth stock for investors seeking exposure to the Chinese tech industry.