Sorrento Therapeutics (NASDAQ:SRNE) is up 25% at 11:51 a.m. on no apparent news about the biotech specifically. Sorrento announced this morning that it will make a presentation next week at NobleCon14, an investor conference put on by Noble Capital Markets, but that's clearly not worthy of a double-digit jump.

The most obvious catalyst for the news-free spike is Celgene's (NASDAQ:CELG) announcement that it's buying Juno Therapeutics (NASDAQ:JUNO) for $9 billion, a 28% increase on its already inflated price after details of the deal were leaked last week. Other biotechs, including bluebird bio that's up 9%, also spiked on the news. 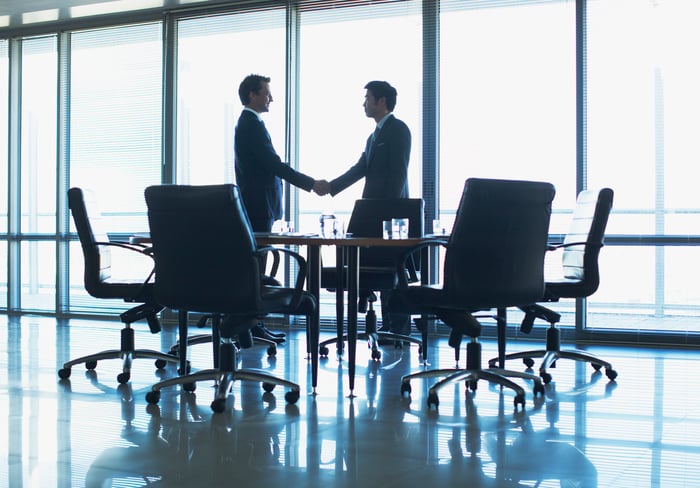 Like Juno Therapeutics, Sorrento is also developing cancer treatments called chimeric antigen receptor T-cell (CAR-T) therapies that train a patient's immune cells to attack tumor cells. But Juno is much further along with a potential approval next year; Sorrento's most advanced CAR-T, which targets CEA, is waiting to enter phase II. Juno's CAR-T pipeline is also substantially more extensive while Sorrento has just one other CAR-T, which is only in preclinical development.

Of course, at a market cap around $660 million, Sorrento is more than an order of magnitude cheaper than Juno. It's certainly possible a larger drugmaker could buy Sorrento for the CAR-T assets just to get a foot in the door, but that would put the new owner substantially behind Celgene as well as Gilead Sciences and Novartis, which both already have approved CAR-T therapies on the market.

It's hard to see how Sorrento is really worth 25% more because Celgene bought Juno, considering that we already knew CAR-T was a hot space with Gilead's purchase of Kite last year and the rumor that Celgene was interested in buying Juno.

Nevertheless there are things for Sorrento's investors to look forward to, including a decision on the marketing application for Sorrento's lidocaine patch ZTlido, which is expected on or before Feb. 28. Sorrento also has a decently sized pipeline beyond ZTlido and its CAR-T program which are worth keeping an eye on.