Over the past five years, shares of IBM tumbled 13%. Yet shares of Alphabet surged more than 220%, compared to the NASDAQ's 133% gain. Alphabet was clearly the better pick over those years, but past gains never guarantee future returns. 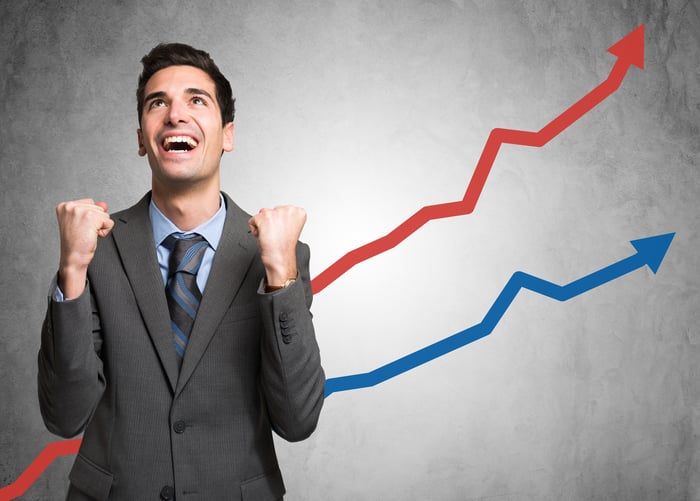 So looking ahead, will Alphabet remain a better investment than IBM this year? Or is it finally Big Blue's turn to shine?

IBM generates its revenue from a sprawling mix of IT services, business hardware, and business software. Demand for many of its older products and services is waning due to market saturation and tough competition.

In response, IBM started investing in the higher growth cloud, analytics, security, mobile, and social tech markets. Those five markets make up IBM's "strategic imperatives" (SI), which the company hopes can offset the ongoing declines at its legacy businesses.

Alphabet has a much simpler business model. Most of its revenues (87% last quarter) still come from online ad sales. The rest come from a mix of hardware sales, Google Play, and "other bets" like Google Fiber, self-driving cars, and its investment arms.

Alphabet's core strategy -- mining user data to craft targeted ads -- is its greatest strength and its biggest weakness. Google offers free services to accumulate that data, which is a lightning rod for privacy advocates and government regulators. The business also faces tough competition from Facebook, which offers ads based on a user's social connections and preferences.

IBM recently reported 4% annual sales growth during its fourth quarter. That figure might seem unremarkable, but it actually marks Big Blue's first quarter of positive growth in almost six years. That turnaround was sparked by its ongoing growth in SI revenues, which jumped 14% annually during the quarter and accounted for 46% of its full-year revenues.

IBM still posted a 1% sales drop for the full year, but analysts expect roughly flat growth next year as its SI growth offsets the declines of its older businesses. However, IBM's SI businesses still face tough competition from Amazon, Microsoft, and Google, all of which have stronger footholds in the public cloud market.

Alphabet is expected to post 22% sales growth for fiscal 2017 when it reports its fourth quarter and full year earnings on Feb. 1. Wall Street expects that momentum to continue with 19% sales growth in 2018.

Alphabet keeps growing because it owns the world's most popular search engine, mobile operating system (Android), web browser (Chrome), and video streaming site (YouTube). That ever-expanding ecosystem feeds data from billions of users to its ad business and widens its moat against any potential challengers.

IBM's diversified business of hardware, software, and services has much lower margins than Alphabet's ad business. Alphabet's operating margins declined over the past few years on higher costs and bigger ecosystem investments, but they remain much higher than IBM's. 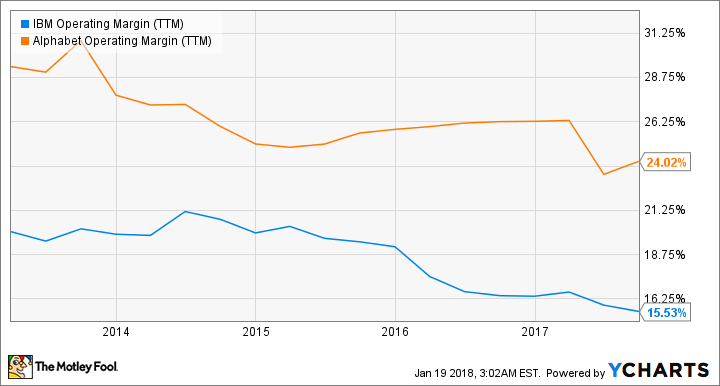 In fiscal 2017, IBM's non-GAAP operating EPS rose 2%. Analysts expect that figure, lifted by cost cutting measures and buybacks, to rise 3% this year. That steady growth will ensure that IBM pays its dividend yield of 3.4%, which used up less than half of its earnings over the past year.

Wall Street sees Alphabet's earnings falling 6% this year, mainly due to its $2.7 billion fine in the EU, before rebounding 29% in fiscal 2018. Unlike IBM, Alphabet never paid a cash dividend, and has no plans to do so in the near future.

IBM trades at just 12 times forward earnings, which is much lower than Alphabet's forward P/E of 28. But IBM is cheap for a reason -- investors don't see much growth on the horizon, although the company has likely reached an inflection point. Meanwhile, investors are willing to pay up for Alphabet, which faces very little competition in its dominant markets.

I believe IBM and Alphabet are both decent investments at current prices. But Alphabet will probably outperform IBM again this year, simply because it generates more visible growth. IBM, however, needs to convince investors that its revenue growth is sustainable for a few more quarters before it finally mounts a comeback.