There's a lot of buzz surrounding the idea that vehicles may soon be able to drive themselves, zipping us around from work to home and everywhere in between without us having to put a finger on the steering wheel.

And while it's likely that we're still decades away from autonomous vehicles being ubiquitous, technology and automotive companies are making huge strides toward that goal right now. Their pursuit of driverless vehicles will create new businesses like autonomous taxis, save tens of thousands of lives, and be worth nearly $127 billion by 2027.

If all of that sounds promising to you as an investor, then there's a company you should know about. It's called Aptiv (NYSE: APTV), and it might be one of the best driverless car pure-plays out there. 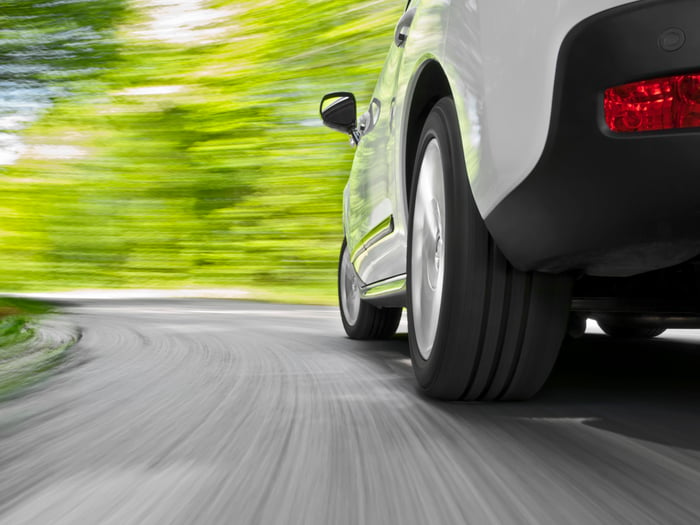 Don't worry if you've never heard of Aptiv before. The company has years of experience designing software and hardware for automotive companies under the name Delphi Automotive. Aptiv spun off from Delphi a few months ago after the company decided to separate its internal combustion part of its business from its software and hardware offerings in the driverless car space.

The newly created Aptiv focuses on future technologies like driverless cars while building on years of experience under the Delphi brand.

Back in 2015, Delphi conducted a coast-to-coast driverless car test in the U.S., and the company has continued to build software, sensors, and other hardware that are making driverless cars a reality. For example, the company's Centralized Sensing Localization Planning (CSLP) platform combines radar, lidar, cameras, and artificial intelligence to help cars see in all types of weather, understand how far they are away from objects, and understand what vehicles are looking at when images are fed into their cameras.

In short, Aptiv is already designing and building the software and hardware necessary to make the mass distribution of driverless cars possible. And because it has a long history of being a major supplier to automotive manufacturers, Aptiv is perfectly positioned to grow along with the driverless car market.

Before the spinoff, Delphi acquired a self-driving technology company called nuTonomy in order to advance the company's autonomous vehicle plans. NuTonomy is now part of Aptiv. It already has a partnership with the ride-hailing company Lyft, and it has also worked on tech for Jaguar Land Rover. Aptiv and Lyft showed off their tech at the Consumer Electronics Show this month by allowing some attendees to hail self-driving Lyfts to drive them to specific locations around Las Vegas.

Aptiv also has partnerships with Mobileye, which was recently acquired by Intel, and has plans to release a driverless car system with Level 4 capabilities (nearly fully autonomous) by next year. Mobileye is a key company that provides Advanced Driver Assistance Systems (ADAS), like automatic braking for cars, and the partnership between all of the companies should help Aptiv advance its self-driving technologies even further.

Aptiv's stock currently trades at just 18 times its forward earnings, which is much cheaper than the average P/E ratio for the technology sector. The driverless car market is going to take years to fully develop, but Aptiv already has the right technologies, partnerships, and long-term automotive customers to make it a key player in the growing autonomous vehicle space.