Last quarter, management at New Oriental Education & Technology Group (NYSE:EDU) -- China's largest after-school tutoring network -- signaled to investors that it would be undergoing a massive expansion in the number of schools and learning centers that it runs.

After successfully pivoting from primarily training college-bound Chinese students to tutoring for younger kids, New Oriental wants to take advantage of its momentum to capture as much market share as possible. 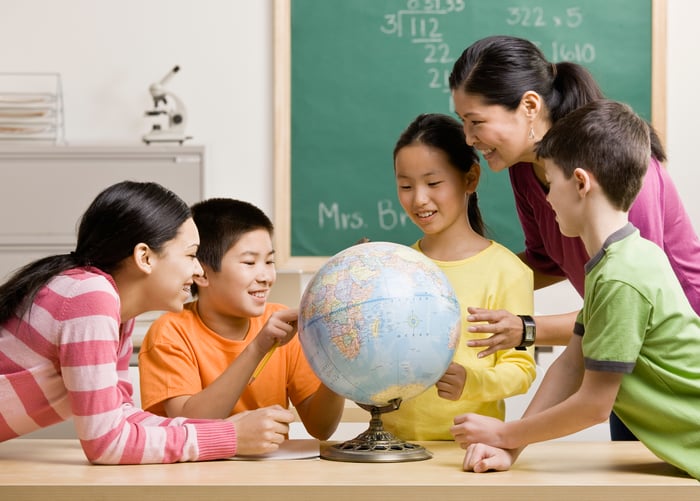 Management definitely followed through, increasing square footage nationwide by 38% to include 940 learning centers and schools by the time the most recent quarter ended at the end of November. While that investment has held back earnings growth -- and the company's stock -- there was still a lot to like in New Oriental's fiscal second-quarter earnings release this week.

No one likes to see revenue growing faster than earnings, as it signals to investors that a company will be keeping less and less of every dollar that it makes in sales. But that's where the aforementioned expansion comes in.

Because this square footage is being built out so quickly, there's no way these new schools and learning centers could be at capacity. But the overhead costs associated with them -- including building, maintenance, and teacher salaries -- need to be paid no matter the enrollment figures. Stephen Yang, New Oriental's CFO, said this will be a short-term concern: "We still managed to improve the utilization of facilities compared with last quarter. This helps to lessen the pressure on margins as we continued the investment in capacity expansion and as expected we are on the right track to recover from the impact on the margins in the previous quarter."

Instead of revenue or even earnings, there were two figures that stood out to me as most important:

There's no indicator more important for the health of a for-profit education company than these two metrics. The robust enrollment growth shows that New Oriental's offerings are at least getting students in the door, and the growth of deferred revenue means parents aren't just trying to take advantage of summer pricing deals -- they're sticking around and paying full price for tutoring services.

All of this is key because there are two moats New Oriental is looking to fortify: (1) its brand, which it is largely accomplishing via expansion, and (2) high switching costs, which come both from the familiarity forged between students, teachers and their classmates, as well as potential discounts for families that stay in the system.

Here's a rundown of other highlights from the quarter:

In the quarter ahead, management expects revenue to grow between 35% and 38% to a range of $591 million to $604 million. Investors should continue to keep an eye on enrollment numbers and deferred revenue, as they'll serve as excellent bellwethers for where the company is headed.