Shares of engineering and construction company McDermott International (NYSE:MDR) are up 12% as of 12:45 p.m. EST Wednesday. The surge in price comes after the company announced a new contract award from Saudi Aramco, received an analyst upgrade, and updated its 2017 guidance and issued 2018 guidance.

Things have been turning up for McDermott over the past month or so. The stock slid after the company's December announcement that it will acquire Chicago Bridge & Iron (NYSE:CBI) for $6 billion. Today's slew of good news lifted the stock to its highest levels since oil prices crashed back in 2014. 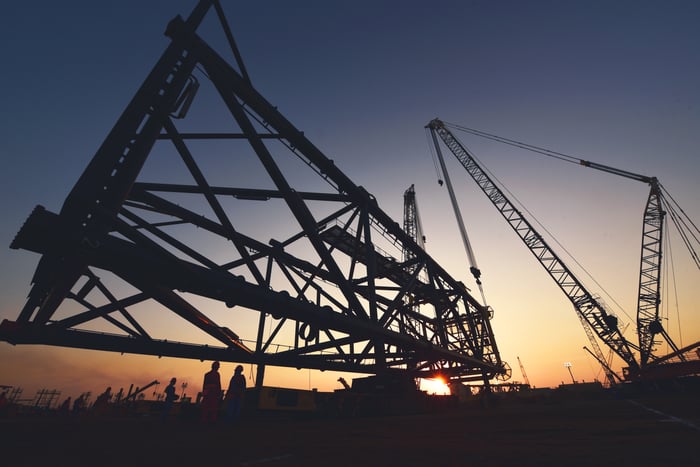 The Saudi Aramco deal is a large contract under which McDermott will build 13 jackets -- the underwater structures for shallow-water oil platforms -- for multiple offshore fields. By McDermott's definition, a large contract is between $50 million and $250 million. This is the fourth fast-tracked deal McDermott has signed with Middle Eastern clients in the past 24 months.

On top of some strong performance, management also updated its 2017 guidance. The company now expects to generate between $0.60 and $0.63 per share for fiscal 2017 compared to a previous estimate of $0.53. For 2018, the company expects $0.42 to $0.52 per share. This estimate doesn't include the integration of CB&I, though, so we should expect updated guidance when that deal closes in the second quarter of 2018.

This bevy of good news has Wall Street excited, as one analyst has already upgraded the stock. McDermott and CB&I are heavy hitters in the oil and gas industry as two of the largest engineering and construction companies. A combination of the two will give McDermott greater negotiating power and allow it to bid on more advanced technology jobs like export facilities for liquefied natural gas.

After a multiyear lull in oil and gas spending outside North America, higher oil prices are likely going to provide an incentive for companies to green-light their next development projects soon. That, combined with McDermott's larger footprint, should bode well for this stock in the future.