The tax reform act that was passed in December made more than a passing impact on TI's business results. In the fourth quarter, the company recorded a $730 million charge to account for taxes on indefinitely reinvested earnings and a lower valuation of the balance sheet's deferred tax assets.

TI's operating tax rate stopped at 31% of pre-tax profits, just like it did in the year-ago period. But the effective GAAP tax rate jumped from 30% to 78%. This huge tax charge notwithstanding, TI's management still celebrated the new tax rules.

The company expects its annual operating tax rate to fall all the way down to 18% in 2019. The current fiscal year will be a stepping stone between the old and new rates, thanks to transitional tax expenses, landing near 25%.

"We applaud the reform to U.S. corporate law because it enables U.S.-headquartered companies, like TI, to compete more effectively on a global basis," said Texas Instruments' head of investor relations, Dave Pahl. "The new law recognizes and rewards companies for exporting and having manufacturing, R&D [research and development] and intellectual property in the United States."

That would translate to an approximately 18% upside to TI's quarterly and annual earnings starting in 2019. 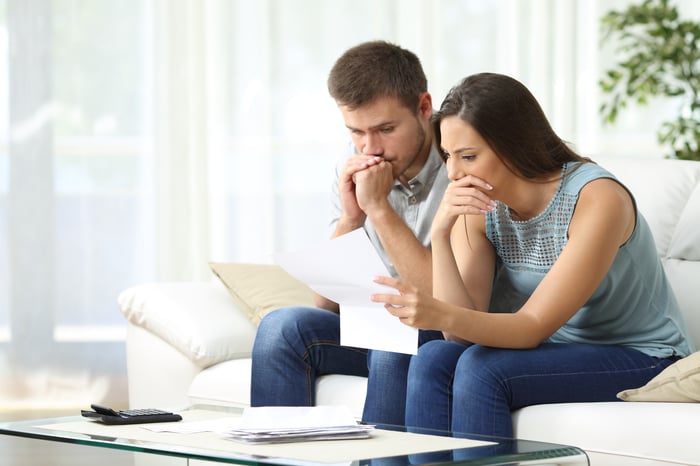 The tax code can be confusing. Image source: Getty Images.

What else is going on in Texas?

Looking beyond the enormous tax impacts, TI's diversified business model posted another solid quarter. Sales of embedded processors rose 20% year over year, to $896 million, while operating profits in that segment increased by 43%, to $307 million.

The larger and higher-margin analog segment scored an 11% revenue gain, at $2.5 billion. Operating profits in this division gained 20%, landing at $1.2 billion.

Overall, clients in the industrial and automotive computing markets accounted for 54% of TI's total sales. That's up from 42% four years ago and 51% at the end of 2016, and TI aims to give these key sectors every chance to grow their revenue share even further.

Looking to the ongoing first quarter, Texas Instruments expects top-line sales near $3.6 billion and GAAP earnings in the neighborhood of $1.09 per share. The bottom-line forecast includes a one-time $30 million tax benefit -- or roughly $0.03 per share -- as Uncle Sam's tax reform continues to shake things up. Hitting these targets would work out to a 7% year-over-year increase of both revenues and earnings. The guidance figures are also slightly ahead of current Street projections.

The only sensible reason why TI shares closed 8.5% lower on Wednesday is the fact that the stock had raced 47% higher over the previous six months alone. Momentum is building behind the company's chosen focus markets, particularly in the automotive-computing sector, and the stock was simply getting a little bit overheated. That being said, this price correction was probably overdue -- and may not have gone far enough.

I'm not sure I would recommend buying TI even at these lower prices. The stock is still trading at a generous 26 times trailing earnings and eight times sales, which places investors in Wall Street's nosebleed section.

Yes, Texas Instruments is a quality company and deserves to trade at a premium valuation, but this is just too much. You might want to wait for another correction before jumping in.