Investors are full of pessimism about Ford ahead of its fourth-quarter and full-year 2017 results, which will be announced after the bell Wednesday. But is it warranted?

Last week wasn't great for Ford Motor Co. (F 8.52%) investors. During a conference, the automaker made it clear that its 2017 earnings would come in below estimates, and that it expected 2018's numbers to drop even further. Specifically, Ford said it expects its adjusted 2017 earnings to check in at $1.78 per share when they are announced Wednesday, compared to analysts' consensus estimate of $1.83. So what's going on with Ford, and what should investors be thinking right now?

Some explaining to do

One headwind Ford has battled recently is commodity costs. For example, the company faced $1.6 billion in increased steel and aluminum expenses. Such higher costs for materials directly weighed on its results. 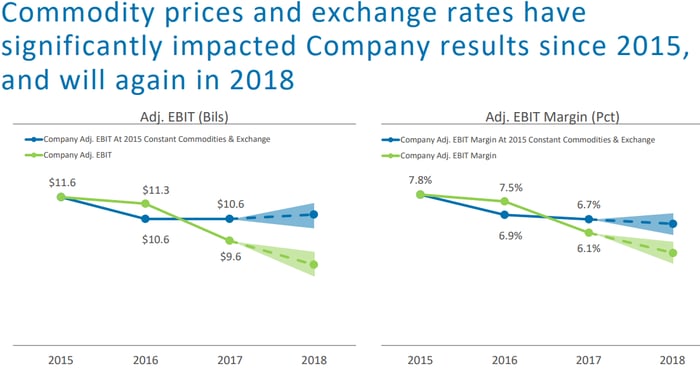 Another factor putting a dent in the company's financials is its bet on electrified vehicles. Ford plans to have 16 full-battery electric models and 24 hybrids or plug-in hybrid models by 2022, including trucks and vans, and encompassing models in its Ford, Lincoln, and commercial vehicle lines.

It's great for an automaker once known for its strategic shortsightedness to develop a long-term vision like this, but not all investors are patient, and Ford's vision won't come cheap. It originally intended to invest $4.5 billion in electrification between 2015 and 2020, but that figure has jumped 50% to $6.7 billion. Ford's total investment in those new technologies is now forecast to top $11 billion between 2015 and 2022.

Ford is also adjusting its portfolio of vehicles and swapping $7 billion in research and development funding from cars to light trucks, which would change its product mix by 10 percentage points in favor of utility vehicles. Ford also plans to launch 25 vehicle models by 2019 in North America, helping it reach a 35% refresh rate -- a newer portfolio of vehicles sells better -- and widening its coverage of F-Series and Ranger options in an attempt to offset plateauing car sales.

While all of these moves will be great for the long term, the problem is that Ford's crosstown rival has made similar investments and commitments -- one could easily argue that General Motors (GM 7.45%) has done more with smart mobility and driverless vehicles up to this point -- and hasn't taken a step back in financial performance. In fact, before Ford announced its guidance cut, GM revealed that its 2017 pre-tax profits will set a record, and land near the high end of its guidance range of $6 to $6.50 per share -- and it forecast that its 2018 results would be similarly strong.

On one hand, Ford is still very profitable: It's expected to have generated pre-tax profits of roughly $8.4 billion during 2017. On the other hand, that's a 19% decline from its strong 2016 result, and it's clear to investors that it will take a while for these significant investments to bear fruit. It comes down to this: If you're a long-term investor willing to wait, Ford has a strong product base and a vision, and will offer a dividend yield topping 6% at current price levels (including supplemental dividend).

If you aren't interested in that yield, or lack the time horizon to wait for its investments in smart mobility, electrified vehicles, and driverless technology to pay off, it's time to consider other options for your portfolio. But remember, Ford's strategic transition under Alan Mulally took time as well, and for some, it was well worth the wait.