Shares of Vuzix (NASDAQ:VUZI) surged as much as 14.6% and closed up 8.5% on Wednesday, after the specialist in smart glasses and augmented reality completed a promising pilot with a large customer and then launched a new program to meet customer demand. 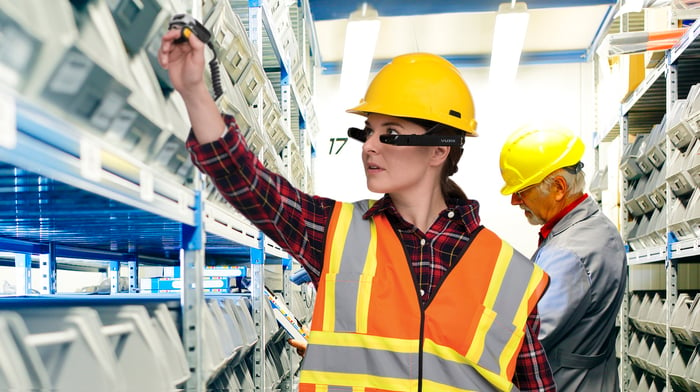 Greg Flickinger, group VP of manufacturing operations at H-E-B, stated that Vuzix's solution "exceeded our expectations," noting that a team leader had the system's Vuzix M300 Smart Glasses "out of the box and [...] in productive use in a matter of minutes."

"The ability to leverage augmented reality on the plant floor will open the door to a game-changing approach to technical education and knowledge transfer," Flickinger added. "We've really just started to scratch the surface of all the ways we can drive value with the Vuzix M300 in our operations."

If that glowing review wasn't enough, Vuzix followed today by launching the new "Vuzix Blade Edge program." The new program aims to fulfill "accelerating demand" for developers, enterprise customers, and the general public to receive access to the company's new Vuzix Blade hardware, which was unveiled at the Consumer Electronics Show earlier this month. It also replaces the beta developer kit pre-order program previously in place for the cutting-edge smart glasses.

An expanded deal with H-E-B seems imminent based on those comments -- though it remains to be seen how much the deal will contribute in the near term to Vuzix's top and bottom lines. At the same time, it won't take much to move the needle; Vuzix generated sales of just $3.94 million through the first three quarters of 2017, incurring a net loss of more than $13.7 million over the same period.

Perhaps most important, then, is the possibility that other retail customers might follow suit as they're made aware of an opportunity to streamline their own operations using Vuzix's products -- something the new Blade Edge program aims to enable with its latest technology.

So while Vuzix still has plenty of work to do as it scales the business and pursues sustained profitability, this week's developments were a step in the right direction. And it's no surprise to see shares climbing in response.