Amazon (NASDAQ:AMZN) unleashed its latest invention on the public today, opening the doors of its Amazon Go store to non-Amazon employees for the first time. The Seattle convenience store features patented "Just Walk Out" technology, relying on a system of cameras and artificial intelligence tools that use machine learning to track items that customers take off the shelves and charge them once they leave the store. Customers, after scanning a smartphone app upon entering through a turnstile, simply put items into their bag and walk out when they're done without having to pay a cashier or even stop at a self-checkout counter.

The potentially revolutionary technology looks like a classic Amazon move, embodying the company's "Day 1" philosophy of experimentation and being unafraid of failure. It's unclear if the expensive rollout will pay off, but Amazon's history of risk-taking has been a big driver of its success. Beyond the headlines and the attention being lavished on Amazon, here are three things investors should know about the new technology. 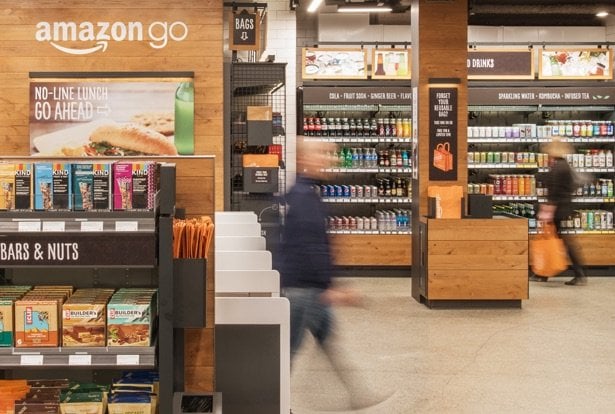 Amazon originally opened the Go store to Amazon employees in December 2016. At the time, it was seen as another incremental step in the company's brick-and-mortar retail experiment, which included a small chain of Amazon Books stores, pop-up shops featuring Amazon gadgets, and two soon-to-come grocery pickup stations in Seattle.

However, the company's acquisition of Whole Foods turned that whole strategy upside down. Not only did the deal shock supermarket stocks, but it seemed to give Amazon infinite options in grocery retail now that it had 400-plus stores to work with, as well as the Whole Foods brand. Ramping up the Just Walk Out technology from Amazon Go into Whole Foods stores seemed like a natural step. It would help Whole Foods lower prices by saving on labor costs and add convenience for its customers. The technology would also put pressure on rivals like Walmart and Kroger to follow suit.

However, it doesn't seem like Whole Foods will be getting rid of its cashiers anytime soon. Dilip Kumar, Amazon's Vice President for Amazon Go and Amazon Books, told The Wall Street Journal that there are no plans to add the technology to Whole Foods, and declined to say whether the company will open more Go stores, though he did say the technology was designed to scale. Still, considering that the Go store is only 1,800 square feet and Whole Foods markets range around 40,000 square feet, deploying the technology in a full-size supermarket would be much more difficult.

Ostensibly, the technology behind Amazon Go looks like it's designed to eliminate jobs. There are more than 3.5 million Americans employed as cashiers today, and if the Just Walk Out technology went mainstream, presumably cashiers would become obsolete.

However, Amazon has been careful since the project was first revealed to explain that the technology is designed to increase convenience rather than minimize labor costs. The e-commerce giant argues that employees who would have been cashiers are redeployed for other tasks such as cooking, checking IDs in the alcohol aisle, or assisting with product returns and other problems. Amazon has made a similar argument regarding its warehouses, saying that automated technology like its Kiva robots, which save time and manpower, allow employees to be redeployed for other tasks.

It's worth noting that the Amazon Go store, which has several employees, has more staff than a comparable convenience store like a 7-11, which generally has one or two cashiers behind the counter. While the technology may be bad for cashiers, overall it could be a net creator of jobs as we've seen with similar technologies in the past.

3. The rollout took a lot longer than expected

When Amazon opened the Go store to employees in December 2016, it said the general public would have access by early 2017. However, as the months went by and there was no such opening, it became clear that there were many more glitches and challenges with the technology than expected. When there were more than 20 people in the store, the cameras weren't able to track everyone's behavior and struggled to track things that were put back on shelves.

Amazon stayed relatively mum on those setbacks, and the store's opening indicates the company overcame them. However, those struggles may be a sign that the technology is more unwieldy than Amazon had hoped, and it may face similar difficulties if it tries to expand it to larger stores or even sell it to other retailers, as some analysts have suspected.

For now, the store is sure to spark awe about Amazon's technological prowess, as visitors reported that customers were busy taking selfies inside, but in order for Just Walk Out to move the company's bottom line, it will likely need to expand to Whole Foods at some point. If Amazon kept it at the convenience store level, the company would need thousands of those stores to move the needle.

There is great potential for the Just Walk Out technology, though. We just don't know what it is yet. Keep an eye on reports from the store and out of Amazon for the next move on what could be yet another groundbreaking innovation from the e-commerce giant.