No matter which way you slice it, 2017 was an incredible year for Google parent Alphabet Inc. (NASDAQ:GOOG)(NASDAQ:GOOGL). Shares of the tech giant soared nearly 33% last year, most recently exceeding $1,000 per share for the first time in late October after its third-quarter results crushed expectations.

But the stock market is a forward-looking machine. So with just one week to go until Alphabet announces fourth-quarter results on Feb. 1, 2018, let's take a closer look at what investors should be watching for when that 10-Q hits the wires. 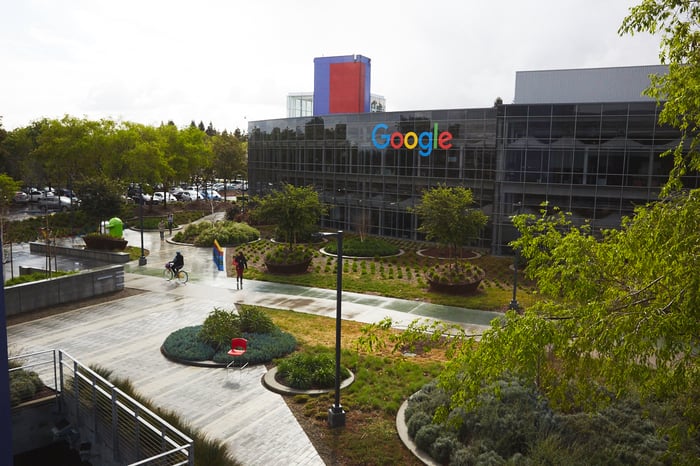 On that pesky antitrust fine

Recall that last June, the European Commission (EC) fined Google a record €2.42 billion -- or roughly $3.0 billion at today's exchange rates -- for allegedly favoring its own comparison-shopping service over competitors in Google Search results. And though Alphabet publicly disagreed with the EC's conclusion, it was able to account for the fine in its entirety as a separate operating expense in its second-quarter 2017 report. Then in September, Google formally filed an appeal in the EU courts to challenge the fine.

In late October, however, new details of the appeal emerged via the EU's official journal. Among other things, Google is arguing that the fine is unwarranted as its allegedly abusive conduct was focused not on driving traffic to its own services, but rather on improving the quality of its search results. In addition, Google believes that the EC wrongly speculated "about potential anticompetitive effects without examining actual market developments," and "fails to take proper account of the competitive constraint exercised by merchant platforms."

Of course, this case could take years to find resolution. But I think investors should still listen closely for any updates from Alphabet management on its status in these early stages.

On Alphabet's top and bottom lines

Zooming back out on Alphabet's headline numbers, the company doesn't provide specific revenue or earnings guidance. But that doesn't stop Wall Street from trying make predictions anyway; consensus estimates call for Alphabet's revenue to grow 22.2% year over year to $31.84 billion, and for earnings to climb 6.6% to $9.98 per share.

But while meeting (or failing to meet) those expectations may result in a near-term price swing, investors shouldn't be overly concerned as long as Alphabet maintains its typical long-term focus.

More important are the underlying drivers of Alphabet's two operating segments, Google and "Other Bets."

Google, for its part, is composed of products including Search, Chrome, Gmail, YouTube, Maps, Android, Cloud, and Play, as well as the company's burgeoning hardware segment. Thanks primarily to advertising generated by the former group (up 21.4% last quarter to more than $24 billion), Google will undoubtedly remain Alphabet's bread and butter, representing the vast majority of its consolidated revenue and all operating income.

Google will also break down its advertising performance between sales generated by its own properties (up 22.6% last quarter to $19.72 billion) and those from network members' sites (up 16.3% last quarter to $4.34 billion). Within that, expect further detail on aggregated paid clicks (up 47% last quarter) and aggregate cost per click (down 18%), which measures how much Google makes from each ad.

Note aggregate cost per click has declined for the past several quarters primarily due to the outsized growth of YouTube, where its popular TrueView ads tend to reach users earlier in the purchase funnel and monetize at lower rates. Considering the platform has over 1.5 billion logged-in users each month who each watch an average of 60 minutes of video per day on mobile devices alone, you won't find Google complaining about YouTube's ad performance anytime soon.

Meanwhile, Other Bets contains results from Alphabet's conglomeration of early-stage, high-potential businesses, many of which still operate in the pre-revenue stage. Among them are the likes of Waymo (self-driving vehicles), Verily (life sciences), Fiber (high-speed internet), Nest (connected home), and X (moonshot initiatives).

But not all have yet to find sales. Other Bets revenue climbed 45% through the first nine months of 2017 -- mostly from Nest, Verily, and Fiber -- with the segment simultaneously incurring an operating loss of $2.439 billion.

And if that loss sounds large, it's all relative. Google singlehandedly generated operating income of $24.145 billion over the same period, providing more than enough cushion for the company to foster these promising businesses.

Again, don't hold your breath for Alphabet to tell us exactly where its top or bottom lines will arrive in the coming quarters. But it's a new year, and management will almost certainly offer a broader outlook covering everything from the state of the overall company, industry trends, and elaboration on the company's continued focus on innovation and long-term growth.