Apple (NASDAQ:AAPL) has had a number of enterprise partners over the years. The company has collaborated with the likes of International Business Machines (NYSE:IBM), SAP (NYSE:SAP), and Cisco Systems (NASDAQ:CSCO).

Each of these deals was designed to help Apple expand further into the enterprise market. The company that was built on consumer-centric devices has increasingly been courting some of the worlds largest multi-national conglomerates. 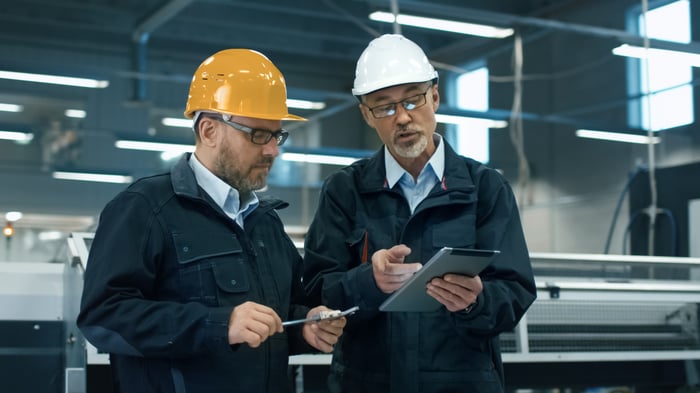 Apple and GE announced that they would collaborate to develop "powerful industrial apps" that would integrate GE's industrial Internet of Things (IoT) platform to the iPhone and iPad. GE's Predix system is a platform that provides jet engines, power plants, and other industrial equipment with an internet connection and uses powerful analytics to improve performance and lower cost.

This will connect GE's industrial internet to Apple's mobile devices, allowing pilots, service technicians, and factory workers to use devices they are already using for more sophisticated jobs. With recently debuted iPhone features like virtual reality, this will provide developers with a rich playing field for future capability. GE will also promote the iPhone and iPad to its "global workforce of more than 330,000 employees," which will likely result in residual sales of the products over time.

A look back at similar deals may provide context as to why this is an important deal for Apple.

The first such partnership came in mid-2014 when Apple announced an exclusive partnership with IBM. At the time, the companies said that they sought "to transform enterprise mobility through a new class of business apps" that would bring IBM's "big data and analytics capabilities to iPhone and iPad." IBM contributed its 100,000 industry and domain consultants and software developers, in an effort to provide its business customers with apps that had the same ease of use and functionality that endeared consumers to Apple's devices. IBM would also sell iPhones and iPads with "industry specific solutions to business clients worldwide."

Apple went a step further in its next collaboration. The company teamed with application software and database company SAP. Apple said the joint effort would develop "a new iOS software development kit (SDK) and training academy" that would facilitate the development of native iOS apps custom-made for specific business needs. At the time, Apple CEO Tim Cook said that 76% of business transactions came into contact with an SAP system, making them an ideal partner.

Apple also worked with Cisco to "create a fast lane for iOS business users by optimizing Cisco networks for iOS devices and apps." The move also sought to tightly integrate the iPhone and iPad into Cisco environments. The companies have since expanded the partnership to include Mac computers.

It is important to note that these deals have been driven by the popularity of Apple's products within the enterprise community. At the time of the IBM deal, Cook said that "iPhone and iPad are the best mobile devices in the world and have transformed the way people work with over 98 percent of the Fortune 500 and over 92 percent of the Global 500 using iOS devices in their business today," giving the company a large installed base and a distinct advantage.

One of the defining features of the iPhone is the stickiness of the product. Famed investor Warren Buffett said, "Apple strikes me as having quite a sticky product and an enormously useful product to people that use it...The degree to which people's lives center around the product is huge."

The ability to infuse the device with enterprise features will make the product even more useful, and thereby less likely that users will migrate to another platform. The Apple ecosystem provides the company with a significant competitive advantage, and partnerships like this one will only increase that.