NVIDIA (NASDAQ:NVDA) has been viewed as a leader in supplying the chips that will power the brains of self-driving cars. At the 2018 Consumer Electronics Show in Las Vegas, NVIDIA made three important announcements to solidify its position in this multibillion-dollar market opportunity.

Read on to find out what these companies are up to, and when investors can expect NVIDIA's automotive segment to begin reaping the rewards from its driverless car initiatives. 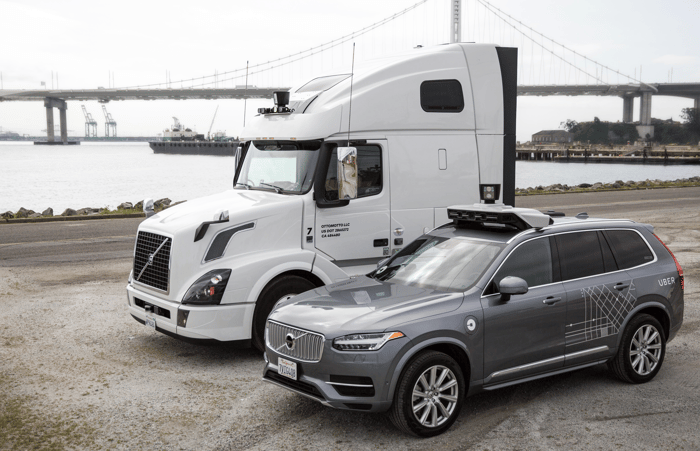 Uber has been testing self-driving cars through its Advanced Technologies Group, based in Pittsburgh. In total, the ridesharing company has completed over 50,000 passenger trips and logged over 2 million autonomous miles.

The announcement between NVIDIA and Uber seems to be little more than a formality since Uber is already quite familiar with NVIDIA technology, having tested a fleet of Volvo XC90 SUVs powered by NVIDIA's DRIVE PX car computer.

Here's what head of Uber Advanced Technologies Group Eric Meyhofer said in a statement about the partnership:

Developing safe, reliable autonomous vehicles requires sophisticated AI software and a high-performance GPU computing engine in the vehicle. NVIDIA is a key technology provider to Uber as we bring scalable self-driving cars and trucks to market.

Pegasus is a beast, delivering 320 trillion operations per second, and is the first chip NVIDIA has made that has enough processing power to operate a Level 5 vehicle -- the most advanced level of autonomous driving in which the car needs zero human assistance.

If there was one company that NVIDIA was hoping to win over to validate its new Pegasus chip, it had to be Uber, a forward-looking company that is hell-bent on disrupting public transportation and has already made a deal with Volvo to receive a large fleet of NVIDIA powered Volvo XC90 SUVs to be delivered between 2019 and 2021.

Newly announced collaborations with ZF and Baidu could prove very significant, as well. These two are using NVIDIA's Xavier chip to build a production-ready artificial intelligence (AI) autonomous vehicle for the China market, which will position NVIDIA to tap into the largest car market in the world.

NVIDIA is also supplying its DRIVE PX IX platform to Volkswagen in order to enable "new cockpit experiences and improve safety." The IX platform is software that allows for auto-unlocking with facial and gesture recognition, voice control, and surround perception and gaze tracking to give the driver hazard and distraction alerts.

"In just a few years, every new vehicle will be expected to have AI assistants for voice, gesture, and facial recognition as well as augmented reality," said Huang in a press release. "Volkswagen's work with NVIDIA DRIVE IX technology will make that a reality. Together, we are building a new generation of cars that are safer, more enjoyable to ride in than anything that has come before, and accessible to everyone."

These new collaborations -- in addition to the more than 200 companies already using NVIDIA's DRIVE PX platform -- have placed the graphics specialist in a leading position in the development of self-driving cars.

But with all of the progressive technology and partnerships, NVIDIA's automotive segment revenue is relatively small and hasn't grown as fast as its data center revenue, as you can see in the following table.

The primary source of revenue for automotive has been infotainment system modules. So far, NVIDIA is generating relatively little revenue from selling DRIVE PX chips to automakers and start-ups.

Huang explained to investors on the company's fiscal third quarter conference call that the self-driving market is still in an early stage of development, so don't expect big revenue gains for at least a few more years.

In terms of revenues, my expectation is that this coming year, we'll enjoy revenues as a result of the supercomputers that customers will have to buy for training their networks, for simulating all these autonomous vehicles. ... And we'll see fairly large quantities of development systems being sold this coming year. The year after that, I think, is the year when you're going to see the robotaxis ramping, and our economics in every robotaxi is several thousand dollars.

Note that Huang's comment about robotaxis ramping up next year is consistent with the timing of the delivery of Volvo SUVs to Uber starting in 2019. Also, Huang seems to be hinting that NVIDIA will enjoy healthy margins once this market ramps up.

Huang expects Level 4 autonomous cars to hit the road by 2021, which means it's still going to be several years before companies start releasing Level 5 cars for everyone. This is why NVIDIA has released a chip as powerful as Pegasus upfront, so companies have all of the processing power they need right now to begin testing fully autonomous vehicles in preparation for their release in the next decade.

NVIDIA management has estimated its addressable market in self-driving cars to be $8 billion by 2025. For now, investors should feel confident knowing that NVIDIA continues to make advances with the companies developing driverless vehicles, which validates its DRIVE PX platform as a preferred technology.