TAL Education (NYSE:TAL) stock popped nearly 19% in early Thursday trading -- and is still up a good 18.6% as of noon EST. This being earnings season, you might expect an earnings report lay behind the stock's sudden popularity -- and you'd be right.

This morning, TAL Education reported its fiscal third-quarter 2017 earnings numbers. Profits per diluted share came in at $0.07, a penny ahead of Wall Street's estimates. Sales of $433.3 million likewise exceeded the Street's expectation for revenue of $419.2 million. 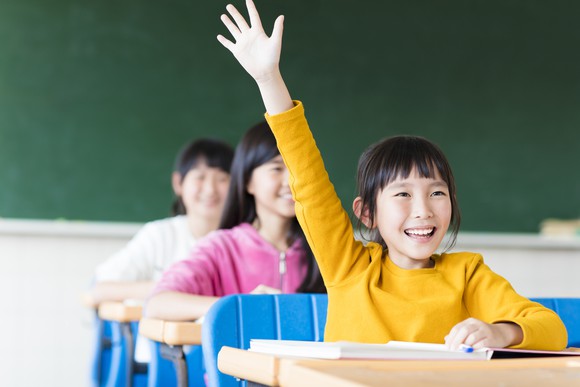 TAL Education was a star pupil in Q3, but could it become the class dunce in Q4? Image source: Getty Images.

TAL's performance relative to its own earlier performance (as opposed to analyst expectations) was even more impressive. In Q3, TAL grew its revenue 66.3% year over year -- just a skosh slower than last quarter's growth. Operating profits more than doubled, and on the bottom line, profits per diluted American Depositary Share (three ADSs equal one Class A common share) were $0.07 -- up 168% over last year's Q3 result.

TAL CFO Rong Luo pronounced himself "pleased" with the company's "growth momentum." In addition to the sales growth, TAL reported an 85% increase in student enrollment.

That being said, the fourth quarter could mark a small slowdown for TAL (albeit, to a still-blistering pace) -- and a risk for TAL investors. Guiding investors on what to expect, TAL said Q4 revenues will range between $474.5 million and $480.8 million, representing a year-over-year growth rate of between 50% and 52%. That's fast growth, but below the $491.1 million that Wall Street has been forecasting.

The moral of this story: TAL shares soared on an earnings "beat" in Q3 -- but don't be shocked if in Q4 these shares retreat just as fast on a sales "miss."