Barely a week after Walmart (NYSE:WMT) said it would shutter 63 Sam's Club Stores, the retail giant is planning another major divestiture. According to Reuters, the company is in talks to sell a significant stake in its Brazilian business to private equity firm Advent International.

Walmart refused to comment on the report, though the news comes after CEO Doug McMillon had called for a review of global operations in 2016, which led to the sale of its Chinese e-commerce business to JD.com in exchange for a 5% stake in China's No. 2 online retailer. A look at the company's recent results in Brazil and its strategy at home helps explain why it's seeking to diminish its exposure to Latin America's largest economy. 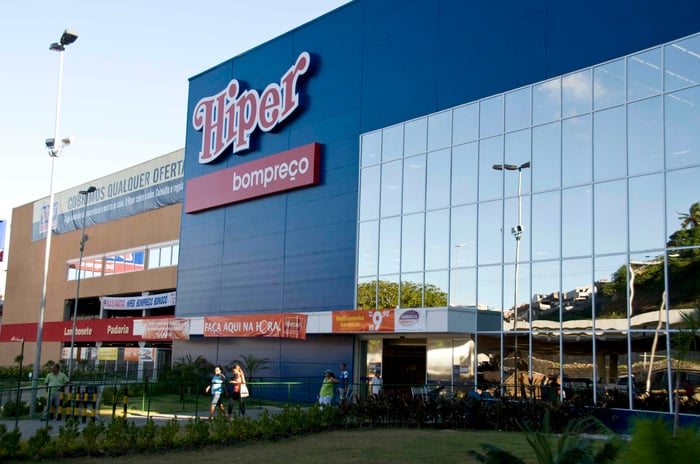 One of Walmart's Hiper stores in Brazil. Image source: Walmart.

The Brazilian economy was mired in a recession from 2015 to 2017 that it only began to emerge from in the second quarter of last year with meager 0.2% GDP growth. A political crisis, high interest rates, and soaring inflation contributed to a contraction in the economy that shaved as much as 8% off the Brazilian GDP.

Not surprisingly, Walmart, along with other retailers, has struggled in such an environment. The retail giant had 498 stores in Brazil as of a year ago, but it had actually closed some locations since its count peaked in 2013 at 558. Walmart entered Brazil in 1995 and grew aggressively through two big acquisitions in 2004 and 2005, making it the third-largest retailer in the country, but it hasn't been able to generate an operating profit in the last seven years. Poor site selection, inefficient operations, and high prices seem to have plagued the company in addition to macroeconomic problems. Considering those challenges, an asset sale seems to be in the company's best interest as the business, which brought in $9.4 billion in sales last year, would fetch a significant sum. Reuters said Walmart would retain a stake in the business so it could potentially benefit from an economic recovery or an operational restructuring that would improve results.

All hands on e-commerce

When Walmart acquired Jet.com in 2016 for $3.3 billion, it heralded a new era in the retail giant's evolution. No longer would the company pursue growth by blanketing the U.S. with stores, instead putting its efforts into reaching customers through the internet. Guided by Jet.com founder and e-commerce mastermind Marc Lore, Walmart has since spent hundreds of millions of dollars acquiring other digitally native brands like Bonobos, Modcloth, and Moosejaw. And it's been adapting its brick-and-mortar base to serve online customers by rapidly expanding its online grocery program, adding features like Pickup Towers to facilitate in-store pickup for online orders, and offering free two-day delivery for orders over $35 in part by using stores as shipping bases.

Walmart seemed to double down on that strategy earlier this month when it said it would close 63 Sam's Club warehouses and convert as many as 10 of them to e-commerce fulfillment centers. It also emphasized domestic e-commerce when it forecast 40% growth in the category in its fiscal 2019 guidance, but it said it would open at most 15 supercenters this year, a far cry from its strategy just five years ago, when it would open hundreds of the big-box stores annually.

It's also worth noting that Walmart, despite operating in 27 countries outside the U.S., still derives the vast majority of its revenue, about three-quarters, from its home country. It therefore makes sense for the company to concentrate on domestic growth, especially at a time when its e-commerce investments seem to be delivering impressive returns. The upheaval caused by the rise of online sales also creates an opportunity to gain market share -- and makes it crucial that Walmart establish itself in this fast-growing category.

Rather than trying to turn around its profitless Brazilian business, Walmart would be better off using the billions in proceeds from a sale to make further investments in domestic e-commerce, such as acquisitions and more grocery pickup stations.

There's no word yet on when a sale could take a place, but pivoting toward growth is a smart move for the retailer. Similar sales in its remaining international businesses could follow as Walmart has also struggled in the U.K. and other markets abroad.