These stocks stood out on a good day for Wall Street. Find out why.

The stock market performed reasonably well on Thursday, with the Dow leaping out to a triple-digit gain even as broader indexes had more modest advances. Investors focused their attention on the status of global trade, with President Trump arriving in Davos for the World Economic Forum and discussing his plans for positions that the U.S. might take with respect to negotiations on the North American Free Trade Agreement and the Trans-Pacific Partnership. Earnings season continued to roll onward, and some individual companies saw strong gains even on a relatively quiet day on Wall Street. W.W. Grainger ( GWW -0.40% ), Iovance Biotherapeutics ( IOVA 0.64% ), and Dolby Laboratories ( DLB 0.91% ) were among the best performers on the day. Below, we'll look more closely at these stocks to tell you why they did so well.

W.W. Grainger rose 5%, gaining ground for a second straight day after the industrial supplier reported its fourth-quarter financial results early Wednesday. Grainger said that sales climbed almost 7%, helping to produce a 20% rise in adjusted earnings. Substantial improvement in cost controls and product optimization have helped Grainger make more profits from its business, and generally improving conditions in the industrial economy could give the company even more opportunities for future growth. Even so, a two-day jump of more than 25% already builds a great deal of optimism into the stock price going forward. 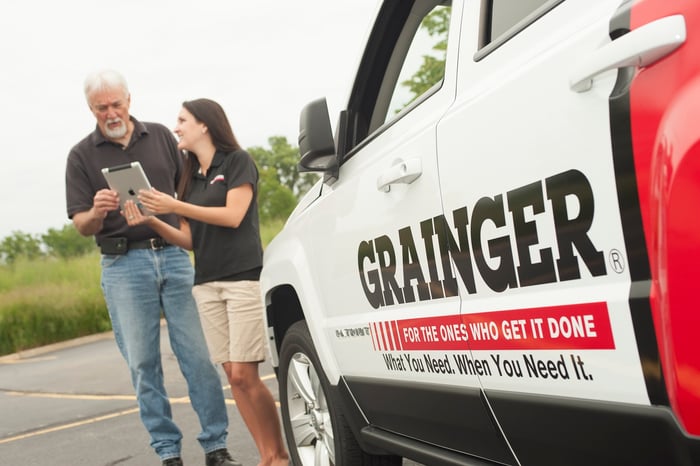 Iovance Biotherapeutics stock picked up 28% in the wake of favorable preliminary trial data for one of the company's cancer treatments. The immunotherapy-focused biotech said that phase 2 studies of its LN-145 tumor-infiltrating lymphocyte technology showed confirmed partial responses in three of eight patients with squamous cell carcinoma of the head and neck and one of two patients with cervical carcinoma. CEO Dr. Maria Fardis said that Iovance was excited with the early data, believing that the results could lead to an important treatment alternative in fighting the disease. Iovance also successfully priced an offering of 13 million shares of stock, raising $150 million and giving those fortunate buyers who got in on the deal at $11.50 per share an immediate profit. Small biotech stocks are risky, but Iovance generated optimism among its shareholders today.

Finally, shares of Dolby Laboratories gained 9%. The company behind various cinematic sight and sound experiences reported adjusted net income gains of almost 25% for its fiscal first quarter, although the company took a one-time hit due to the deemed repatriation of overseas earnings under the new tax reform law. Dolby also predicted strong results for the current quarter and full 2018 fiscal year, and CEO Kevin Yeaman noted that "[a]doption of Dolby Vision and Dolby Atmos continues to expand, with more mainstream availability of TVs and sound bars, and the first PC with Dolby Vision announced by Lenovo." As interest in entertainment expands, Dolby should have continued opportunities to use its ground-breaking technology to its financial advantage.