There was a chance that Helmerich & Payne (NYSE:HP) could be profitable this past quarter, but it missed it by that much. That said, the company's net loss adjusted for a one-time tax gain was much better than Wall Street's expectations. Still, the company's results have been slow to recover despite the rapid rise in oil prices over the past year or so. That has been deliberate as management is preparing the company for the new demands of producers looking to squeeze every barrel of oil possible out of each new shale well.

Let's drill down into Helmerich & Payne's most recent quarter to see why the company's profits continue to improve so slowly, and what investors can expect in 2018 based on management's plans for the year.

So here's the good thing, Helmerich & Payne's revenue has increased, and per rig costs have declined enough such that the company is posting positive operating income results, albeit a small one. While all three of the company's business segments chipped in, it's the company's U.S. land drilling business that matters. It put a total of 204 rigs into the field this past quarter, which was a slower pace than in prior quarters. That slower reactivation pace helped immensely, though, as it reduced operating expenses related to reactivating rigs.

On top of the positive operating income result, Helmerich & Payne also benefited from the changes to the tax code, which resulted in a one time, non-cash benefit of $500 million. If we were to pull out this tax gain, earnings for the quarter would have been a per-share loss of $0.02.

The thing that may have some investors a little concerned is the company's continued free cash flow burn. One thing to keep in mind, though, is that the company spent $47 million on one time acquisitions for a couple technology companies that should help separate its offering to producers from the rest of its peers. Also, management has decided to increase its capital spending rate in 2018 to upgrade more of its available rigs to what it calls super-spec. These super-spec rigs have more powerful equipment on them to handle longer and longer wells as well as adding walking capability to each rig such that it can quickly move from one well to the next without assembling and disassembling the rig. Management estimates it will spend $350 million for fiscal year 2018 compared to its initial estimate of $250 million to $300 million.

Fortunately, Helmerich & Payne still has enough cash on hand to cover its spending habits as well as pay its generous dividend. The company ended the quarter with $425 million in cash and short-term investments compared to $493 million in debt outstanding. So there is plenty of cash and borrowing capacity to cover expenses for the year. 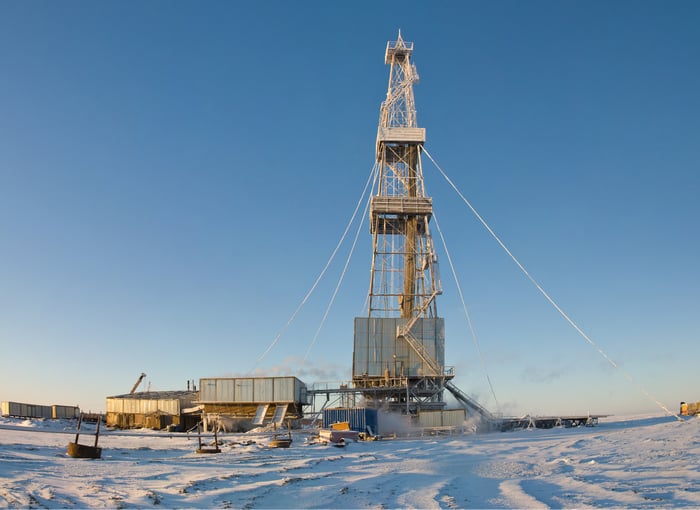 The recovery in the active rig count across the United States had many on Wall Street excited about the prospects of rig companies headed into 2017. What they may not have assumed, though, was that re-activating all those rigs would cost a lot of money and that the uptick in rigs is still well below the peak we saw in 2014.

Helmerich & Payne's earnings results have been a little discouraging, but CEO John Lindsay thinks that the company is making the right move to spend lots of money now on upgrading its fleet and adding new tech to its rigs. Here's what he said in the company's press release that explains the company's rationale.

One of the primary factors driving rig pricing is the continued demand for high capacity super-spec rigs and the near full utilization of that portion of the U.S. fleet. A significant driver for super-spec rig demand last year was an average 15% increase in the length of laterals, and we expect this trend to continue. H&P has over 40% of the active super-spec rigs and with that portion of the industry fleet fully utilized, we believe pricing should continue to improve.  We also have a significant advantage for future growth as we have roughly half of the 200 to 250 upgradeable rigs available in the U.S. market today that could be readily upgraded to super-spec capacity.

We are well equipped for the industry's digital evolution. With our acquisitions of Motive Drilling Technologies and MagVAR we can provide additional value for our customers through improved wellbore quality and placement. Both companies are technology leaders in their respective space and the demand for their offerings is increasing as the importance of wellbore accuracy grows with longer laterals and tighter well spacing. 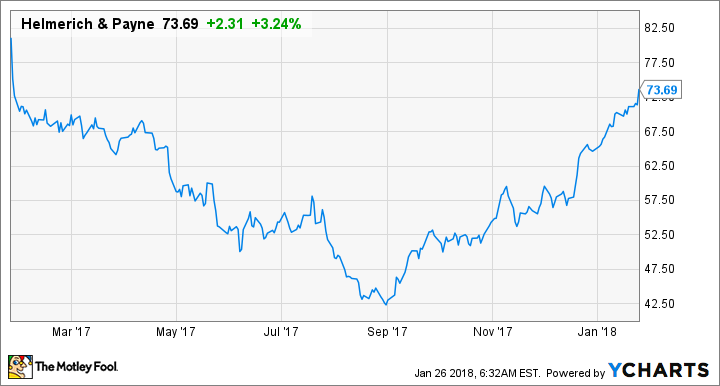 With the largest fleet of super-spec rigs and the capacity to upgrade a large portion of its idle fleet to meet those specifications, Helmerich & Payne is in a position to take a lot of market share. It has already gained 5% of the land drilling market since oil prices started to crash and a 40% control of the super-spec market means it is heads and shoulders above the rest.

To capture this opportunity, though, the company is going to have to spend money. That likely means another year of elevated costs and capital expenditures. For investors that are willing to wade through another year of less-than-great earnings results, Helmerich & Payne's future market opportunity could be worth it in the long run.