President Donald Trump has approved a recommendation from the United States Trade Representative to impose tariffs of up to 50% on imported washing machines and parts. The tariff decreases and then disappears after three years.

The move came after a petition was filed by Whirlpool (NYSE:WHR), a U.S.-based washing machine manufacturer facing tough competition from LG Electronics and Samsung, both based in South Korea. Trump's actions are in line with his "America first" campaign pledge, but tariffs may not have the desired effect.

The goal of the tariff is to level the playing field for the American company, which has been hurt by lower-priced imports. That's what Whirlpool alleged as it accused its two rivals of flooding the market with low-cost washing machines.

Tariffs, however, can backfire for the American public as they can push prices higher. 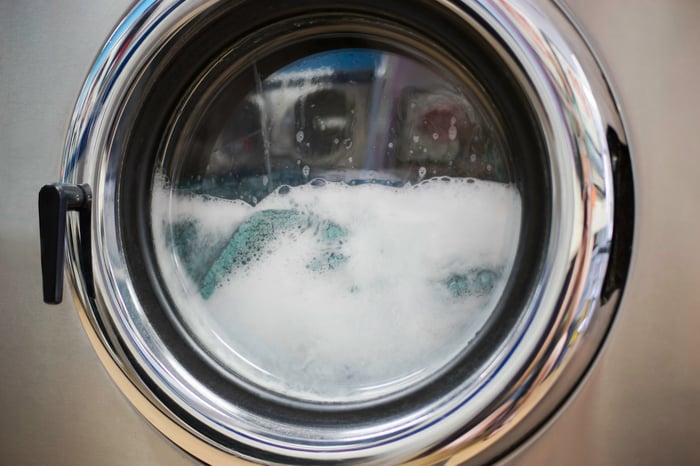 Is now the time to buy a washing machine?

LG has already told retailers that it intends to raise prices, according to The Wall Street Journal [subscription required]. Any increase could have a major consumer impact as LG accounted for 18% of washing machines sold in the U.S. by dollars in the fourth quarter.

LG's actions could cause a ripple effect in the industry. Samsung and Whirlpool could follow with increases of their own, but Chris Rogers, a data analyst at Panjiva, does not believe consumers need to immediately run out and buy a new washing machine. Rogers, whose company describes itself as "a big data company that analyzes global supply chains," believes that prices will go up, just not immediately.

"The effect will increase the cost of a washing machine by an average of 10%, equaling about $90 per machine (based on an average price of $900-$1000, as seen on BestBuy.com)," he wrote in an email interview with The Motley Fool. "While this is significant, according to Panjiva data there was a record number of washing machine exports in December, meaning retailers are likely sitting on large inventories, which could result in their discounting of these machines in the near-term in an effort to move product quickly."

Rogers notes that LG's announced price hike, which some pundits think will be $50 per machine, suggests it is absorbing some of the tariff increase to help cut its stockpile.

"So, if you're thinking of buying a new machine within the year it's worth bumping up that timeline and making the investment in the next few months, but there's no need to go out today," he wrote.

Is this good for consumers?

The washing machine tariff is almost certain to push prices higher, which is bad for Americans looking to buy one. Whirlpool, however, might become more competitive with its foreign rivals and this could lead to good things for its workers.

What remains to be seen is what the ripple effect of the tariffs will be (Trump also enacted a similar tariff on solar panels). These moves could level the playing field for U.S. companies competing domestically, but they could also result in similar moves being made by other countries.

There is widely accepted research that shows that tariffs often end up being an added tax on American consumers. That appears to be what's happening here as Whirlpool may sell some more washing machines, but Americans will pay more when they need to buy a new one (unless they hit the stores in the next few months).