You would have won big-time had you owned either Aphria (NASDAQOTH: APHQF) or MedReleaf (NASDAQOTH: MEDFF) stocks last year. Aphria's share price soared 163% in 2017, while MedReleaf jumped 148%. And both marijuana stocks are winners so far in 2018.

With Canada set to legalize recreational marijuana this summer, the stocks of the top marijuana growers in the country are sure to continue to attract a lot of attention from investors. But which of these is the better marijuana stock going into the rest of 2018? Here's how Aphria and MedReleaf compare. 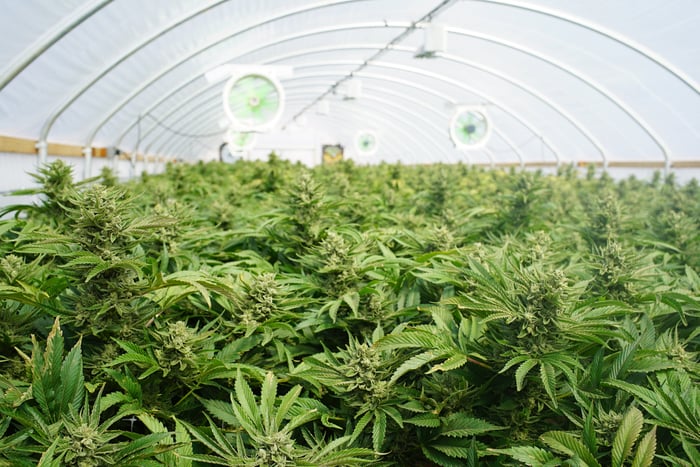 Aphria ranks as the third-largest Canadian marijuana stock in terms of market cap, with the company currently valued around $2.8 billion. For now, Aphria's primary focus is on supplying the medical marijuana market in Canada.

There was one area of retreat for Aphria in late 2017, but it was a wise strategic move. Unlike several of its peers, Aphria opted to expand into the U.S. market last year. In May, the company made a strategic investment in DFMMJ Investment Ltd., which operated a leading medical cannabis supplier in Florida. However, Aphria announced on Dec. 11, 2017, that it would reduce its exposure to the U.S. market.

The problem was that conducting significant business operations in violation of U.S. laws related to marijuana violates the Toronto Stock Exchange's listing requirements. If Aphria continued with its U.S. operations, its stock could have potentially been delisted. The company's management certainly didn't want that to happen, and proceeded to quickly turn a 180 on plans to aggressively expand in the U.S.

Aphria still has an interest in pursuing opportunities outside of Canada, though. The company completed its first shipment of cannabis oil to Australia in October as part of its agreement to supply medical cannabis to Australian medical life science company Medlab.

Of course, the big prize dangling in front of Aphria right now is the anticipated legalization of recreational marijuana in Canada. The company has increased its production capacity through multiple deals. Aphria now forecasts annual production capacity of 230,000 kg. This capacity puts the company in good position to benefit tremendously from what is expected to be huge demand for recreational marijuana in Canada.

MedReleaf has a lot in common with Aphria. However, it's a smaller company -- at least in terms of market cap -- with MedReleaf valued right now at $1.8 billion.

But while MedReleaf's market cap is lower than Aphria's, the company's sales are higher. In November, MedReleaf reported second-quarter revenue of $9.8 million (all quarterly figures in Canadian currency). That was one of the few metrics where the company outperformed Aphria, though.

MedReleaf's revenue actually dropped close to 9% year over year. This decline stemmed primarily from volume and price restrictions imposed by the Veterans Affairs Policy in Canada. MedReleaf also depends more heavily on dry cannabis sales than many of its peers, which is less profitable than cannabis oils and extracts. The good news, however, is that MedReleaf is rapidly growing its sales of these more profitable products.

The company has its eyes on markets outside of Canada as well, although MedReleaf has been steadfast in its policy to only operate in areas that don't go against the Toronto Stock Exchange's listing requirements. In August, MedReleaf completed its first international export to Brazil. That shipment, though, was for only one patient -- a young child with a rare genetic disorder. The company's Australia joint venture secured a license to supply medical marijuana for the Australia market in November. In addition, MedReleaf is participating in the next phase of the medical marijuana licensing process in Germany.

MedReleaf's production capacity as of December 2017 stood at 12,600 kg per year. However, the company is expanding its Bradford, Ontario, facility. With this expansion, MedReleaf's capacity will increase to 35,000 kg per year.

Growth investors, on the other hand, have been and continue to be high (pardon the pun) on marijuana stocks. The best estimates of the recreational marijuana market in Canada range from $4.2 billion to $7.9 billion annually, although some think the actual market size could be significantly greater. The market caps of both companies could move much higher if they can capture a large chunk of that market.

In my view, the most important factor in deciding between Aphria and MedReleaf is the potential market share the companies could grab. I think that Aphria is in a better position, because it will have a much larger production capacity. Both of these marijuana growers could be enormously successful, but my opinion is that Aphria is the better stock right now.