Activision Blizzard (NASDAQ:ATVI) kicked off the first regular season of Overwatch League on Jan. 10, and it had a great start with millions of viewers from around the world tuning in.

Activision's visionary CEO, Bobby Kotick, is making a bold bet that Overwatch League can generate revenue on a scale similar to the NFL or NBA. Although that will take time, the early results look very promising.

Read on for details about viewership, what obstacle Blizzard needs to overcome for Overwatch League to grow its audience, and when investors can expect esports to be the revenue generator that management envisions.

Before the opening week, Activision and Amazon.com's Twitch announced an agreement to make the leading game-streaming site the exclusive third-party destination to watch Overwatch League matches through the first two seasons. Outside of China, the only two ways to watch games are either on Twitch or Blizzard's own site.

The deal helped Overwatch gain the top spot on Twitch's list of most-watched games during opening week. Overwatch League attracted more than 10 million views in total through opening weekend, with opening day drawing 408,000 viewers per minute. Normally, the most-watched games on Twitch receive about 100,000 viewers on a good day, so with six months to go and 456 matches to be played until the playoffs, Overwatch will gain a lot of free marketing.

And viewership likely won't peak until later in the summer when the playoffs start. The gold standard that every esport event is judged by is the League of Legends Championship Series, which reached more than 40 million viewers in 2016 -- eclipsing the 2016 NBA Finals. Overwatch probably won't get anywhere close to that (no other game does), but this is just the first year for Blizzard's popular shooter, and there's no other esport that rivals Overwatch League's scale.

The first season of Overwatch League features 12 games per week from January through June, for a total of 480 regular season matches across all 12 participating teams. There will likely be more teams added for future seasons, representing major cities around the world. This will give fans even more games to watch, which could grow viewership even larger over time. 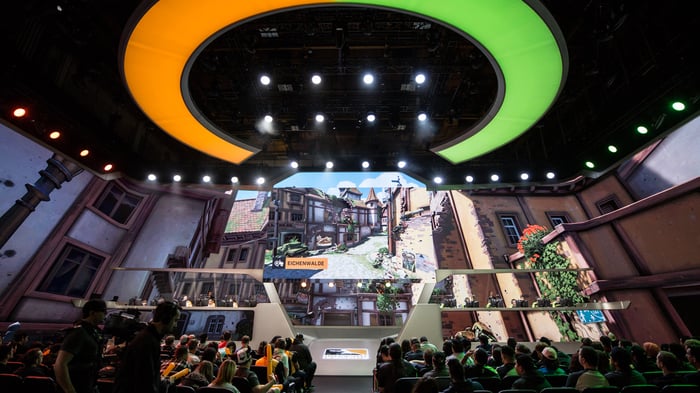 ALL OVERWATCH LEAGUE GAMES ARE HOSTED AT THE BLIZZARD ARENA IN LOS ANGELES. IMAGE SOURCE: OVERWATCHLEAGUE.COM.

Will spectators enjoy the viewing experience?

Overwatch League features a fast-paced, team-based action shooter, with an infinite number of variables that go into winning and losing. These qualities make the game a natural fit as an esport. But at the same time, there's one hurdle that Blizzard has to overcome to make the game easy to watch for a large audience.

With 12 players (six on each team) moving around in a virtual environment, it can be difficult for even hardcore Overwatch players to keep up with what's going on while spectating. It's the nature of any first-person shooter, where you see the action only from the viewpoint of one in-game character.

Blizzard has addressed this problem by implementing smart cameras, with frequent cuts made during a game to focus on the players who are perceived to be making the biggest impact at any given point. There are also different top-down camera angles so the audience can see where every player is positioned on the in-game map.

Plus, Activision Blizzard is relying on the talented commentators at its Major League Gaming network -- which Kotick has envisioned turning into the "ESPN of esports" -- to break down all the action for viewers with the same excitement and professionalism you would find for any football or basketball game on a TV network, such as ESPN.

Blizzard will no doubt receive lots of feedback about improvements for viewers. I would expect the audience to be more engaged and expand in future seasons as management continues to tweak the viewing experience. Not to mention that as Overwatch League continues to trend as a most-watched event on Twitch, it could help the company sell more games and bring in new players to the base.

When will esports make money for Activision?

Sponsorships will be a key part of monetizing Overwatch League, and Activision has already begun signing up major brands as sponsors. After the first week of games, Activision announced Toyota has signed up as a North American launch partner. The automaker joins HP and Intel as official sponsors of Overwatch League, and there should be more if viewership levels remain strong.

In the long run, a large, growing audience should lead to more sponsorships, ticket sales, advertising, and sales of consumer products, which are all the ways Activision Blizzard plans to make money with Overwatch League.

Management previously guided that investors shouldn't expect Overwatch League to generate meaningful revenue in the first year. The inaugural season is all about laying a foundation for long-term growth and profitability, which may take at least a few years. Even so, this is a good start for Activision Blizzard, as it sets out to grow esports into a significant new revenue channel over the long term.