Although Amazon.com (NASDAQ:AMZN) and Wal-Mart Stores (NYSE:WMT) are racing each other into the future by developing concept stores that have no cashiers -- you walk in, grab what you need, and leave -- it will be the proliferation of scan-and-go technology where most consumers first experience the grocery store of the future.

Supermarket giant Kroger (NYSE:KR) is rolling out its Scan-Bag-Go technology to over 400 stores this year, the broadest adoption of the technology yet by any grocer, and in doing so reveals a hidden investment opportunity. 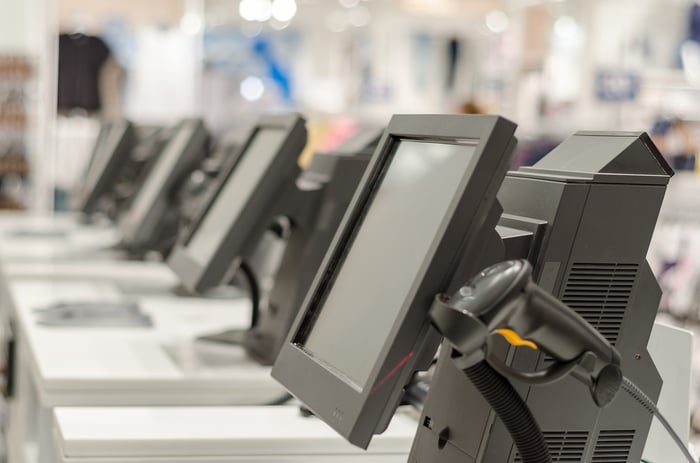 Scan-and-go currently exists in a number of supermarkets, including at Walmart, which has said it is expanding the technology to 100 more stores this year. Using either a handheld scanner provided by the store or a smartphone app, customers scan items from the shelves as they add them to their cart. At checkout, you input your scanner or smartphone into the register and it tallies up your order, making the whole checkout process faster and more efficient than the typical self-checkout lane.

Yet whether it's the older technology consumers are familiar with that has them scanning each item at the register, or the newest scan-and-go sort, there's one company that dominates the field and should benefit as more supermarkets adopt it: NCR (NYSE:NCR).

According to the market analysts at RBR, self-checkout registers are a massive, global opportunity, with a record 49,000 units shipped worldwide in 2016, and the U.S. alone accounting for more than half. Stores like Target have increased the number of self-checkout lanes per store and added such lanes to stores that didn't previously have them.

The global leader by far is NCR, which owns nearly three-quarters of the self-checkout market. While it was able to pad its year-over-year lead by 6% primarily because of the spread of the technology in the U.S., RBR found it was the dominant player in all six regions it examined. The next closest player was Toshiba, with a 9% share, followed by Diebold Nixdorf and Fujitsu at 7% each.

As grocers like Kroger make the technology broadly available in hundreds of stores, RBR foresees global self-checkout installations surging 53% over the next five years to 400,000 units. It follows NCR should be able to grab the lion's share of those placements, particularly if its latest machines solve the dreaded "unexpected item in bagging area" error.

A vision for the future

As anyone who's used a self-checkout register knows, one of the biggest holdups in the checkout process is the register misreading the item scanned, which requires intervention from an employee who must manually override the system. Just this month, NCR said its next-generation models will be moving away from weight-based detection to intelligent image scanners that can recognize items placed on the scanner.

Such computer-vision technology is what is actually driving the new Amazon Go store, the first of which was just opened to the public. It enables the store to know if you've picked up an item or put it back. Amazon's big splash in groceries could drive even more supermarkets to implement self-checkout technology as a competitive feature.

NCR's stock had been beaten down to less than $30 a share, but since mid-November has bounded 30% higher, despite having lowered full-year guidance the month before. It has experienced softness in its ATM business and even self-checkout revenue was down year over year, though that was due to an extremely strong third quarter in 2016 which made for tough comps. It's looking for that business to continue its growth trajectory, and we'll likely see even stronger numbers going forward as this trend toward the cashier-less store intensifies. NCR reports fourth-quarter and full-year earnings on Feb. 8.

Amazon Go may be the grocery store of the future, but NCR is powering the vast majority of the supermarkets dealing with the consumer of today, and with shares still 25% below recent highs and trading at a fraction of its sales, tomorrow's grocery store may just make NCR a buy today.