Video game juggernaut Electronic Arts (NASDAQ:EA) is scheduled to report its fiscal third-quarter earnings on Tuesday, Jan. 30 after the market close. The upcoming report will say a lot about the strength of the company's game lineup, which will need to make up for expected weak sales of Star Wars: Battlefront 2. That title experienced criticism from gamers and the industry over the Electronic Arts' aggressive use of microtransactions.

Management is calling for net bookings -- a non-GAAP measure for net revenue -- to be down 3% year over year to $2 billion. This guidance was issued before Battlefront 2 was released, the there will be a tough comparison with the prior year's release of Battlefield 1 -- one of the top-selling franchises in the industry -- and Titanfall 2. 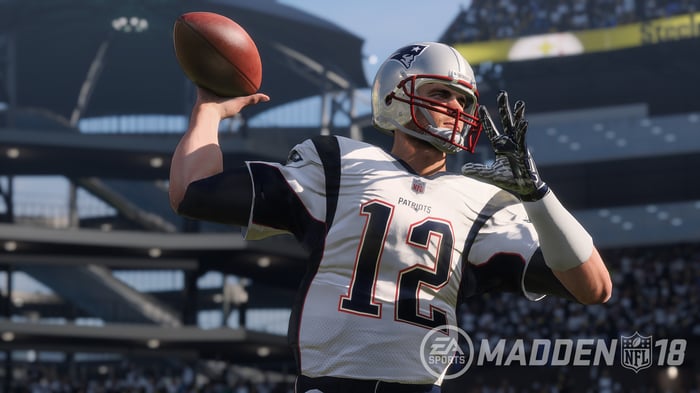 EA'S QUARTER WILL DEPEND HEAVILY ON HOW ITS SPORTS TITLES PERFORM. IMAGE SOURCE: ELECTRONIC ARTS.

The gamer backlash over microtransactions in Battlefront 2 caused the company to temporarily suspend all in-game spending. Given the high margins that video game companies generate from those transactions, investors were initially concerned about what that would mean for the company's near-term financial results.

Wall Street's current revenue estimate of $2.02 billion for the fiscal third quarter is slightly higher than management's guidance. This ties with management's disclosure in a previous SEC filing that the suspension of in-game suspending for Battlefront 2 was not expected to have a material impact on this fiscal year's financial results.

Also, when Electronic Arts raised its full-year outlook for net bookings during last quarter's conference call, it cited strength in Ultimate Team -- a digital card game for sports titles that has been the closest thing the game maker has had to its own ATM.

Investors will want to watch the growth of digital net bookings, which made up 63% of trailing 12-month revenue through the second quarter. Those bookings include full game downloads, mobile games, and add-on content such as Ultimate Team. As digital sales have increased, the company's gross margin has expanded over 1,000 basis points since fiscal 2014. For fiscal 2018, which ends in March, gross margin is expected to expand another 140 basis points annually to 74.6%.

It's all about the games

Ultimate Team revenue alone made up 16% of the top line in fiscal 2017, and there are signs that this lucrative digital card game still has legs.

Moreover, Madden NFL 18 released in the second quarter and enjoyed a strong start out of the gate. Management reported that the number of players participating in Madden Ultimate Team increased 25% year over year.

Plus, FIFA 18 -- one of the most popular sports titles in the industry -- released right before the end of the second quarter and should have delivered equally strong performance, since the game has generated 11% of net revenue in each of the past three fiscal years and is popular on social game streaming sites.

One last game to watch is The Sims 4, which launched on console during the holiday quarter. The classic social simulation game was gaining momentum heading into the season with monthly active users on PC up more than 40% year over year.

This will be an important quarter for Electronic Arts. The November video game sales report wasn't encouraging as it revealed Battlefront 2 selling a meager 882,000 units. If the company overcomes that title's weak start with robust results, that will send a very strong signal to shareholders that its diverse game roster is a force to be reckoned with.